ShotBot pours you a drink with the push of a button.

The ShotBot, not to be confused–or used in conjunction with–the “ShopBot CNC router,” is a simple machine for dispensing, what else, shots. It’s powered by a Geekduino, an Arduino-compatible board with an ATmega328 at its core, along with two RobotGeek Pumping Stations and a few other parts. 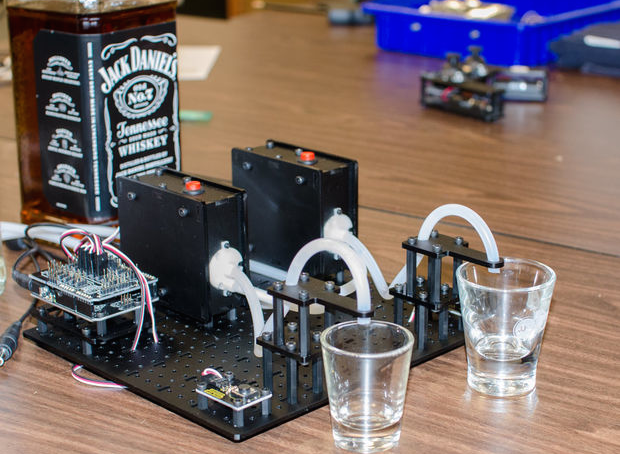 The build itself is fairly simple, with each of the two pumping stations hooked up to a digital pin on the Geekduino, and two buttons hooked wired in for control. The input tube is inserted into a bottle of your beverage of choice, and the output is, as you might guess, placed into a shot glass.

Per the default code, the pump is activated for 2500 milliseconds (2.5 seconds) to dispense the shot. You can, of course, edit this value, depending on the amount of liquid desired. It should be noted that the pumps used are diaphragm-based, so your liquid source needs to be below the pump itself, otherwise your beverage of choice will simply drain out by itself.

You can see it demonstrated in below, and as noted later in the video, “That is a very dangerous toy.” Definitely use something like this responsibly, as our robot helpers can’t quite drive us home yet.