L’evolved is a project that turns everyday objects into “flying smart agents.”

If it’s up to two researchers from MIT Media Lab’s Fluid Interfaces Group, the furniture of tomorrow will fly, react and respond to your everyday needs. In their latest project, Harshit Agrawal and Sang-Won Leigh are exploring how to transform once ordinary objects into “flying smart agents.”

For starters, L’evolved features a drone that acts as a floating desk capable of switching positions, changing heights and flying along as you move. It will even auto-eject if you try to use the wrong pen while completing an assignment or filling out paperwork, and leaves when you’re all done (or in need of a break after working too hard).

The MIT duo has also developed a smart lamp drone that hovers above you to let you read in the dark. By tracking and following its user, the gadget can impressively adapt to different places and postures. What’s more, it can help remotely locate a misplaced book with only a press of a button.

“We’re exploring a future where objects become more humanized, rather than becoming dumber or a dehumanized element of our existence. We want to see more of this inter-relational reaction between humans and objects so that they’re not just being subordinated by our orders,” Leigh recently told Motherboard. “If you think about it it’s really magical, it’s like the world that you imagine in the Harry Potter novels, where everything can fly and come to you.” 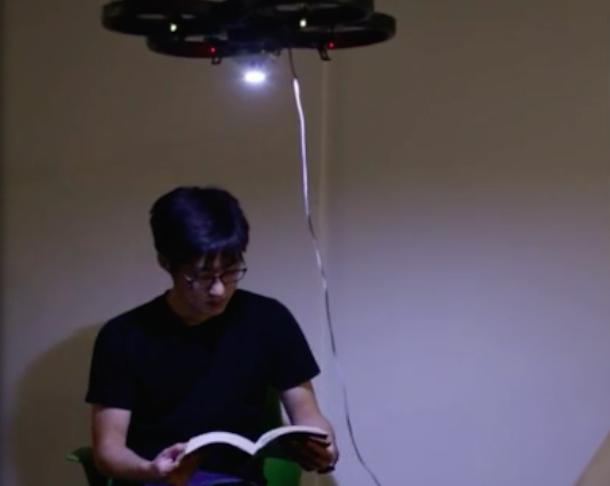 L’evolved consists of two parts: a ground control tower for tracking and fixing the drone’s position and an IR motion capture system. A camera helps keep tabs on everything in the room, including the user and the drone, which receives commands from the computer via Wi-Fi. PID control enables the flying agent to move towards a goal position and provides additional stability. Meanwhile, power is fed through a wall socket, though admittedly this is one aspect of the project that the Makers are looking to improve.

Agrawal reveals to Motherboard that in the future, the team hopes to optimize steadiness by replacing a hovering desk with one that parks in front of users whenever it’s needed and then clears itself off when the user has finished the task at hand.

“On the technological side, we hear a lot about dystopian future — drones always monitoring you and taking away people’s jobs. But, in an equally possible future, we seek a more desirable synergy between man and machine,” the Makers conclude. “L’evolved objects don’t entirely change the way we go about daily tasks: desks are still desks, lamps are still lamps. They don’t substitue or subordinate human activities.”

Intrigued? Head over to the L’evolved’s official page to learn more, and see it in action below!

TagMe is an easy-to-use toolkit for turning personal info into an extended communications interface.

Created by MIT Media Lab’s Fluid Interfaces Group, TagMe is an end-user toolkit for easy creation of responsive objects and environments. It consists of a wearable device that is capable of recognizing the object or surface a user is touching through the use of RFID stickers. These tags are read by an RFID bracelet whenever the user comes in close proximity of the item.

“We present a novel approach to create simple and customizable rules based on emotional attachment to objects and social interactions of people. Using this simple technology, the user can extend their application interfaces to include physical objects and surfaces into their personal environment, allowing people to communicate through everyday objects in very low effort ways,” its team writes.

The wearable was 3D-printed using ABS materials, and its electronic components were embedded on one half of the bracelet, while a battery was placed on the other half. Both halves were then connected via a magnetic closing system. The bracelet also includes an Android application that interfaces with Facebook, Twitter, email and SMS.

“To endow the bracelet with the communication capability between the application and RFID tags, we used different types of electronic components. One of our goals was to make the bracelet as small and lightweight as possible so as to be comfortable being worn on the wrist all day.” In order to accomplish this, the team used a mini RFID reader along with an ATmega168 MCU to control the entire system, a Bluetooth module to facilitate wireless communication and a polymer Lithium-ion battery to power the device.

According to its creators, TagMe can be implemented in a variety of applications, ranging from healthcare and personal relationships to home automation. The system can be used to create convenient “emergency” buttons, like in the event of a car accident, where by simply touching a tag, a notification is sent directly to 911 dispatchers. Beyond that, a social aspect of the project can enable reminders of things, people and places, or be deployed to stay in touch with friends and loved ones. For instance, every time a user touches a present that someone gave to them, an alert is sent to that person.

Want to learn more? You can read the project’s entire paper here, and watch it in action below.