Archaeologists suggest that the art of sewing dates all the way back to the prehistoric era, nearly 25,000 years ago, where those of the last ice age would attach hide, skin, fur and bark to devise clothing and shelter with nothing more than some thread and needles — which at that time were actually made of animal bones, ivory and antler. This form of stitching would go on to evolve, from weaving plant leaves in Africa to natural fibers in the Middle East; however, it wasn’t until the 14th century that the word “sewing” would be used. Fast forward hundreds of years to the Industrial Revolution, which ultimately shifted the production of textiles from the household to the mills. In the early decades of this era, Thomas Saint patented the world’s first sewing machine in 1790, and by the 1840s, other sewing mechanisms began to appear. With the potential to accelerate and perhaps disrupt an entire movement in the same manner as its predecessors, Electroloom will enable users to create seamless, ready-to-wear garments based on custom 3D fabrics from scratch — all sans sewing.

Nowadays, when it comes to buying clothes, you have one of two options: physically go to a brick-and-mortar store or sit at home and shop online, then wait for your package to arrive. What if there was a better, much more efficient way? Instead of hopping in a car or surfing the web, what if you could simply click a few buttons and have a piece of clothing materialize right before your eyes? As futuristic as this may sound, one Bay Area-based startup and HAX alum is looking to make that a reality — and we’ve even seen it firsthand at Maker Faire outside the Startup Pavilion. (It’s pretty remarkable.) 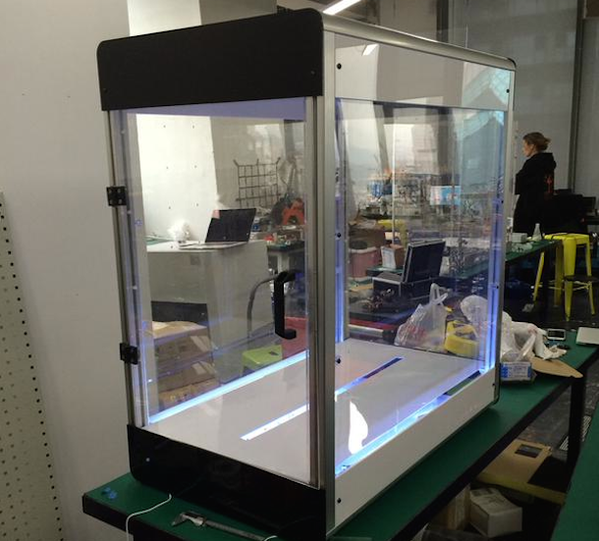 “Inspired by 3D printers, the Maker Movement, and accessible design, we set out to build a technology that enables people to design and manufacture clothes from scratch. And now, after a year and a half of development, we’re ready to find our first set of alpha testers. Introducing, the Electroloom Developer Kit,” the team writes.

In essence, the Electroloom consists of a clear plastic box that holds a thin metal template of pretty much anything from a tank top to a skirt, a beanie cap or whatever else a wearer may desire. Once ready, a customized hybrid of liquid polyester and cotton is passed through an electrically charged nozzle and spun into nano-fibers, which bind together to form a thin yet strong article of clothing in the shape of the mold that can be flexed, draped, folded, and of course, worn. The machine employs an electrospinning process, which the team dubs “Field Guided Fabrication” or “FGF” for short, to convert the liquid solutions into solid fibers that are deposited onto the 3D mold.

When discussing how the Electroloom differs from more conventionally 3D-printed garments, the group of Makers notes that the latter is typically comprised of intricate connections, like joints, that allow the material to bend and move, effectively creating chain-mail that mimics how fabrics actually move. Their material, however, is said to be flexible and light by nature and is guaranteed to embody the same characteristics as traditional fabrics.

With their crowdfunding campaign wrapping up, the team is already looking into blends that would yield fabrics beyond just a polyester/cotton blend, as well as produce variously colored materials with a single click.

“Most people say it looks like magic. We tend to agree,” the team concludes.

Admittedly, Electroloom is still in its infancy and is seeking the DIY community’s help in making this a mainstream product. Sound like something you’d like to own? Head over to its Kickstarter page, where the project has already surpassed its original $50,000 goal. Those wishing to begin making their own attire may have to wait until March 2016, when the first batch of units is expected to ship.