Little Robot Friends are both interactive and customizable, each with a unique and evolving personality. According to Mark Argo of Aesthetec Studio, the Little ‘bot family is built around Atmel’s ATmega328P MCU. Each Little Robot is powered by two rechargeable AAA batteries and depending on the frequency of use, should last for weeks or months on a single charge.

“Little Robot Friends can sense the amount of light in a room, they can hear with a small integrated microphone, they can detect your touch and they can also communicate with other Little Robot Friends using infrared light (like your TV remote),” Argo explained. “They have two RGB LED eyes and a 250mW speaker for expressing their current mood. The brain is an 8-bit 32K Atmega328p microcontroller that provides a lot of space for coding behaviours and storing memories.”

As Argo notes, the Atmega328p microcontroller is the very same MCU found in numerous Atmel-powered Arduino boards, which means the Little Robot Friends can be easily reprogrammed in an Arduino environment for Makers who like to tinker.

“We think we’ve created something beautiful and charming, but what makes it really special is the personality. Every Little Robot Friend has 6 resistor ‘shoelaces’, each representing a different personality trait. Depending on the value of the resistor, it changes the initial personality of the robot and determines some of its characteristics,” Argo continued. 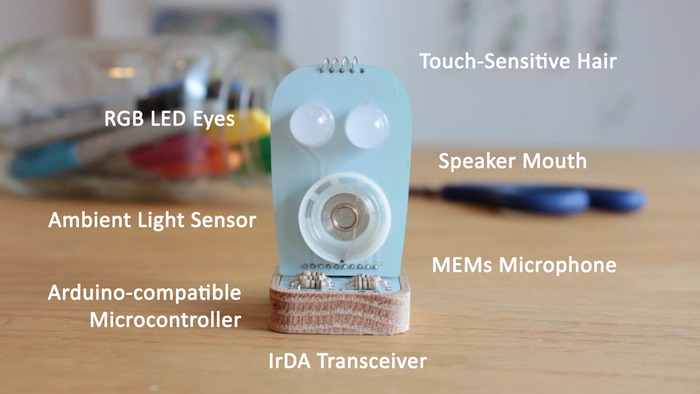 “For example, one shoelace controls the continuum between brave and timid, and will affect how it responds to different stimuli – like being afraid of the dark. However, if you comfort your Little Robot Friend, it will gain confidence and slowly get braver. Each interaction with your Little Robot Friend is stored as a memory and changes how it will behave over time. We are working hard to make this a profound experience, one that can surprise you and make you smile as you watch your Friend grow up.”

Interested in learning more about the Atmel-powered Little Robot Friends? Be sure to check out the project’s official page on Kickstarter.