Picking an Arduino is as easy as Uno, Due, Tre!

Thinking about starting a project? See which Arduino board is right for the job.

This popular board — based on the ATmega328 MCU — features 14 digital input/output pins (of which 6 can be used as PWM outputs), 6 analog inputs, a 16 MHz ceramic resonator, USB connection, power jack, an ICSP header and a reset button.

The Uno does not use the FTDI USB-to-serial driver chip. Instead, it features the ATmega16U2 (ATmega8U2 up to version R2) programmed as a USB-to-serial converter.

In addition, Revision 3 of the Uno offers the following new features:

The Arduino Leonardo is built around the versatile ATmega32U4. This board offers 20 digital input/output pins (of which 7 can be used as PWM outputs and 12 as analog inputs), a 16 MHz crystal oscillator, microUSB connection, power jack, an ICSP header and a reset button.

The Leonardo contains everything needed to support the microcontroller; simply connect it to a computer with a USB cable or power it with a AC-to-DC adapter or battery to get started. Plus, the ATmega32U4 offers built-in USB communication, eliminating the need for a secondary processor. This allows it to appear as a mouse and keyboard, in addition to being recognized as a virtual (CDC) serial / COM port.

The Arduino Due is an MCU board based on the Atmel | SMART SAM3X8E ARM Cortex-M3 CPU.

As the first Arduino built on a 32-bit ARM core microcontroller, Due boasts 54 digital input/output pins (of which 12 can be used as PWM outputs), 12 analog inputs, 4 UARTs (hardware serial ports), an 84 MHz clock, USB OTG capable connection, 2 DAC (digital to analog), 2 TWI, a power jack, an SPI header, a JTAG header, a reset button and an erase button.

Unlike other Arduino boards, the Due runs at 3.3V. The maximum voltage that the I/O pins can tolerate is 3.3V. Providing higher voltages, like 5V to an I/O pin, could damage the board.

The Arduino Yún features an ATmega32U4, along with an Atheros AR9331 that supports a Linux distribution based on OpenWRT known as Linino.

The Yún has built-in Ethernet and Wi-Fi support, a USB-A port, a microSD card slot, 20 digital input/output pins (of which 7 can be used as PWM outputs and 12 as analog inputs), a 16 MHz crystal oscillator, microUSB connection, an ICSP header and 3 reset buttons. The Yún is also capable of communicating with the Linux distribution onboard, offering a powerful networked computer with the ease of Arduino.

In addition to Linux commands like cURL, Makers and engineers can write their own shell and python scripts for robust interactions. The Yún is similar to the Leonardo in that the ATmega32U4 offers USB communication, eliminating the need for a secondary processor. This enables the Yún to appear as a mouse and keyboard, in addition to being recognized as a virtual (CDC) serial?COM port.

Developed in conjunction with Adafruit, the Arduino Micro is powered by ATmega32U4.

The board is equipped 20 digital input/output pins (of which 7 can be used as PWM outputs and 12 as analog inputs), a 16 MHz crystal oscillator, microUSB connection, a ICSP header and a reset button. The Micro includes everything needed to support the microcontroller; simply connect it to a computer with a microUSB cable to get started. The Micro even has a form factor that lets the device be easily placed on a breadboard.

The Arduino Robot is the very first official Arduino on wheels. The robot is equipped with two processors — one for each of its two boards.

The motor board drives the motors, while the control board is tasked with reading sensors and determining how to operate. Each of the ATmega32u4 based units are fully-programmable using the Arduino IDE. More specifically, configuring the robot is similar to the process with the Arduino Leonardo, as both MCUs offer built-in USB communication, effectively eliminating the need for a secondary processor. This enables the Robot to appear to a connected computer as a virtual (CDC) serial?COM port.

The Arduino Esplora is an ATmega32u4 powered microcontroller board derived from the Arduino Leonardo. It’s designed for Makers and DIY hobbyists who want to get up and running with Arduino without having to learn about the electronics first.

The Esplora features onboard sound and light outputs, along with several input sensors, including a joystick, slider, temperature sensor, accelerometer, microphone and a light sensor. It also has the potential to expand its capabilities with two Tinkerkit input and output connectors, along with a socket for a color TFT LCD screen.

The Arduino Mega features an ATmega2560 at its heart.

It is packed with 54 digital input/output pins (of which 15 can be used as PWM outputs), 16 analog inputs, 4 UARTs (hardware serial ports), a 16 MHz crystal oscillator, USB connection, a power jack, an ICSP header and a reset button. Simply connect it to a computer with a USB cable or power it with a AC-to-DC adapter or battery to get started. The Mega is compatible with most shields designed for the Arduino Duemilanove or Diecimila.

Originally based on the ATmega168, and now equipped with the ATmega328, the Arduino Mini is intended for use on breadboards and projects where space is at a premium.

The board is loaded with 14 digital input/output pins (of which 6 can be used as PWM outputs), 8 analog inputs and a 16 MHz crystal oscillator. It can be programmed with the USB Serial adapter, the other USB, or the RS232 to TTL serial adapter.

The LilyPad Arduino is designed specifically for wearables and e-textiles. It can be sewn to fabric and similarly mounted power supplies, sensors and actuators with conductive thread.

The Nano has more or less the same functionality of the Arduino Duemilanove, but in a different package. It lacks only a DC power jack and works with a Mini-B USB cable instead of a standard one. The board is designed and produced by Gravitech.

Powered by an ATmega328, the Arduino Pro Mini is equipped with 14 digital input/output pins (of which 6 can be used as PWM outputs), 8 analog inputs, an on-board resonator, a reset button and some holes for mounting pin headers.

A 6-pin header can be connected to an FTDI cable or Sparkfun breakout board to provide USB power and communication to the board. Note: See also Arduino Pro.

The Arduino Fio (V3) is a microcontroller board based on Atmel’s ATmega32U4. It has 14 digital input/output pins (of which 6 can be used as PWM outputs), 8 analog inputs, an on-board resonator, a reset button and holes for mounting pin headers. It also offers connections for a lithium polymer battery and includes a charge circuit over USB. An XBee socket is available on the bottom of the board.

The Arduino Fio is intended for wireless applications. The user can upload sketches with an a FTDI cable or Sparkfun breakout board. Additionally, by using a modified USB-to-XBee adaptor such as XBee Explorer USB, the user can upload sketches wirelessly. The board comes without pre-mounted headers, facilitating the use of various types of connectors or direct soldering of wires. The Arduino Fio was designed by Shigeru Kobayashi and SparkFun Electronics.

Last year, the tandem of Atmel and Arduino debuted the Zero development board – a simple, elegant and powerful 32-bit extension of the platform. The Arduino Zero board packs an Atmel | SMART SAM D21 MCU, which features an ARM Cortex M0+ core. Additional key hardware specs include 256KB of Flash, 32KB SRAM in a TQFP package and compatibility with 3.3V shields that conform to the Arduino R3 layout.

The Arduino Zero boasts flexible peripherals along with Atmel’s Embedded Debugger (EDBG) – facilitating a full debug interface on the SAMD21 without the need for supplemental hardware. Beyond that, EDBG supports a virtual COM port that can be used for device programming and traditional Arduino bootloader functionality. This highly-anticipated board will be available for purchase from the Arduino Store in the U.S. on Monday June 15th.

The Arduino AtHeart program was specifically launched for Makers and companies with products based on the open-source board that would like to be clearly identified as supporters of the versatile platform. The program is available for any device that includes a processor that is currently supported by the Arduino IDE, including the following Atmel MCUs:

The ATmega32U4 based Touch Board can turn nearly any material or surface into a sensor by connecting it to one of its 12 electrodes, using conductive paint or anything conductive.

The RedBearLab integrated dev platform “blends” the powers of Arduino with Bluetooth 4.0 Low Energy into a single board. It is targeted for Makers looking to develop low-power IoT projects in a quick, easy and efficient manner. The MCU is driven by an ATmega32U4 and a Nordic nRF8001 BLE chip.

The fan-favorite Arduino module, which happens to also be based on an ATmega32U4, lets users easily write programs in the Arduino IDE to read sensors and control lights and motors within the littleBits system.

An Arduino-compatible motherboard with sensors that measure air composition (CO and NO2), temperature, light intensity, sound levels, and humidity. Once configured, the Smart Citizen Kit is capable of streaming data collected by the sensors over Wi-Fi. 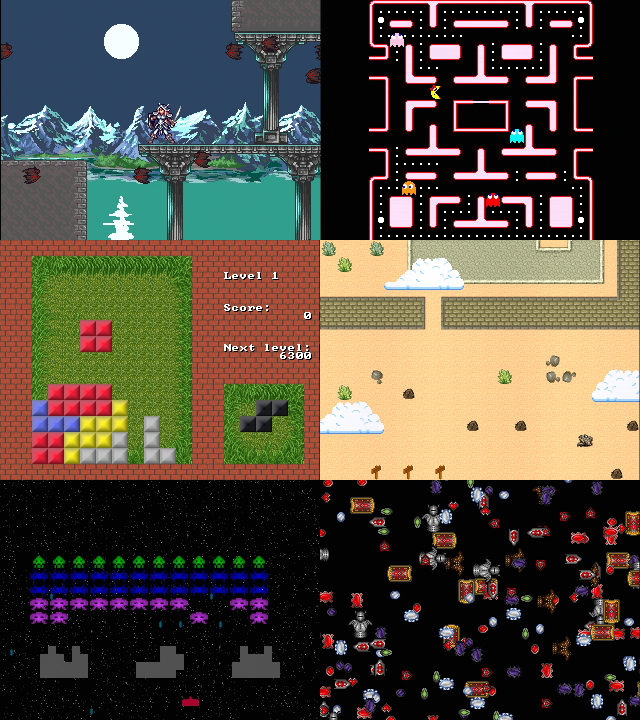 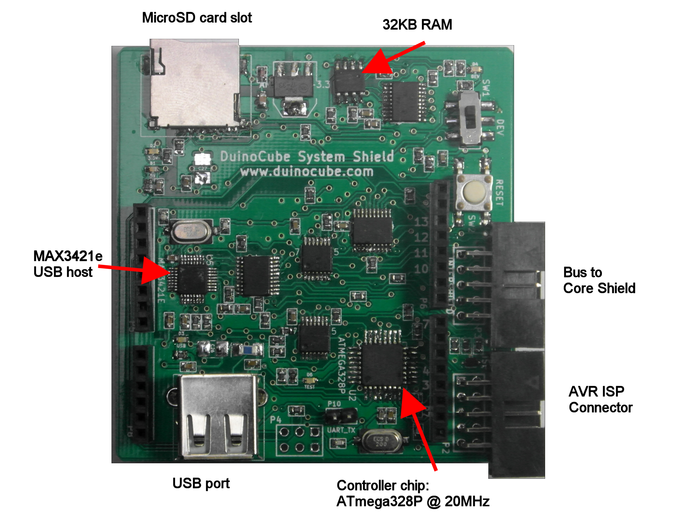 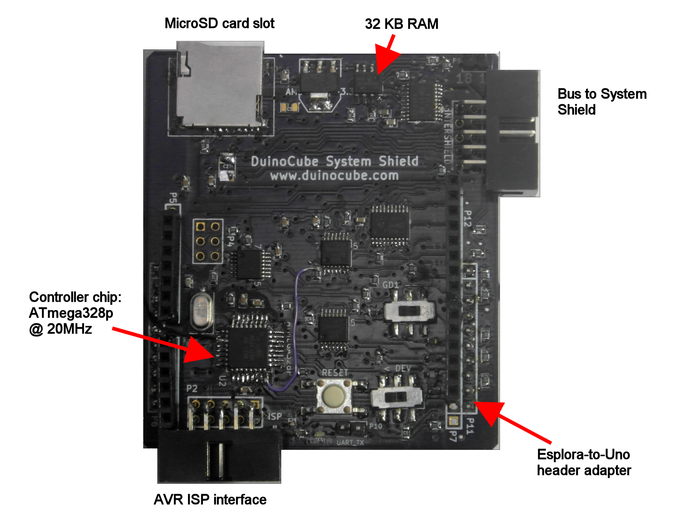