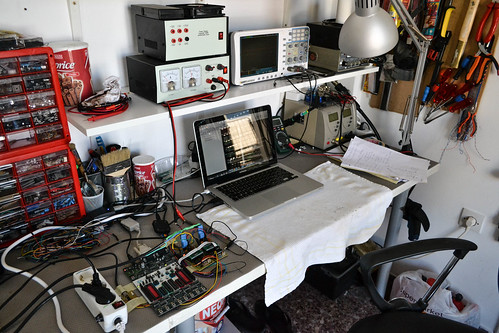 As HackADay’s Eric Evenchick notes, the motor uses a special mechanical switch to select the operating mode. However, the mechanical components inside the switch were broken, preventing the motor from being activated.

How to solve the problem without sourcing a new switch?   Well, Jean-Noel decided to build his own Atmel-based, Arduino Pro Mini (ATmega328 MCU) powered Dahlander switch consisting of three relays tasked with selecting the wiring configuration for each speed mode.

Jean-Noel also added a button to toggle settings, along with two lamps to indicate what mode the motor is currently operating in.

“The Arduino runs a finite-state machine (FSM), ensuring that the device transitions through the modes in the correct order,” Evenchick explained.

“This is quite important, since the motor could be damaged if certain restrictions aren’t followed.”

Meanwhile, the state machine graph was generated using Fizzim, with the final product housed in a DIN rail case, allowing it to be securely mounted along with the rest of the wiring.

Interested in learning more about the Arduino-based Dahlander switch? You can check out the project’s official HackADay page here.

“SmartConnect moves beyond the point-to-point nature of WiFi Direct, and enables connections to standard access points. The SmartConnect series is designed for embedding in low cost devices that need to connect to a network… The first devices in the SmartConnect line will be modules based on two chips: an Atmel SAMD21 Cortex-M0+ microcontroller and an Ozmo 3000 WiFi System on Chip. There’s also an on-board antenna and RF shielding can. It’s a drop in WiFi module, which is certified by the FCC. You can hook up your microcontroller to this device over SPI, and have a fully certified design that supports WiFi.”

As Evenchick notes, there are two ways to use the module.

“The first is as an add-on, which is similar to existing modules. A host microcontroller communicates with the module over SPI and utilizes its command set. The second method uses the module as a standalone device, with application code running on the internal SAMD21 microcontroller,” he explained.

“Atmel has said that the standalone option will only be available on a case to case basis, but we’re hoping this opens up to everyone. If the Arduino toolchain could target this microcontroller, it could be a great development platform for cheap WiFi devices.”

Evenchick also pointed out that there are some notable differences between Atmel’s WiFi module and other platforms on the market.

“One major feature is the built in support for TLS and HTTPS, which makes it easier to build devices with secure connections. This is critical when deploying devices that are connected over the Internet. [Plus], Atmel [announced] improvements in power management as well,” he continued.

“The module can run straight from a battery at 1.8 V to 3.3 V without external regulation, and has a deep sleep current of 5 nA. Obviously the operating power will be much higher, but this will greatly assist devices that sporadically connect to the internet. SmartConnect is targeting a launch date of June 15, so we hope to learn more this summer.”

Interested in reading more about Atmel’s SmartConnect lineup? You can check out HackADay’s full write up here and our original Bits & Pieces SmartConnect article here.

A Maker by the name of “Ojoshi” has designed a DIY intelligent hearing aid prototype powered by an Atmel-based Arduino Mega (ATmega1280). The project, originally posted to Instructables, was recently featured on the HackADay website.

So, just how does the DIY hearing aid prototype work?

First, the platform employs an electret to capture audio, subsequently running it through a pre-amplifier to increase the gain 100x. The next stage consists of four filters – neatly dividing the input signal by frequency into four parts, which are passed into four LTC6910 programmable gain amplifiers, allowing the Arduino to control the gain of each channel. The LTC6910 then takes three digital inputs used to set the gain value.

“To determine which gain to use for each frequency band, the Arduino needs to know how much power is in each band,” explained HackADay’s Eric Evenchick. “An envelope detector averages the signal, which can be read by an analog input on the Arduino. Using this information, the hearing aid can boost specific frequencies when it detects conversation.”

As Evenchick notes, this hearing aid won’t quite fit in your ear, although there is quite a lot of interesting signal processing/action happening on the prototype.

Interested in learning more about Ojoshi’s DIY hearing aid prototype? You can check out the project’s official Instructables page here.