Wearable tech, you are now ready for takeoff.

To celebrate its 20th year in operation, European airline EasyJet recently unveiled a first-of-its kind uniform for both cabin crew and aircraft engineers. Not only does the new getup boast a futuristic look, it incorporates wearable technology to enhance communication and passenger safety procedures. (Bet now you’ll pay attention!) 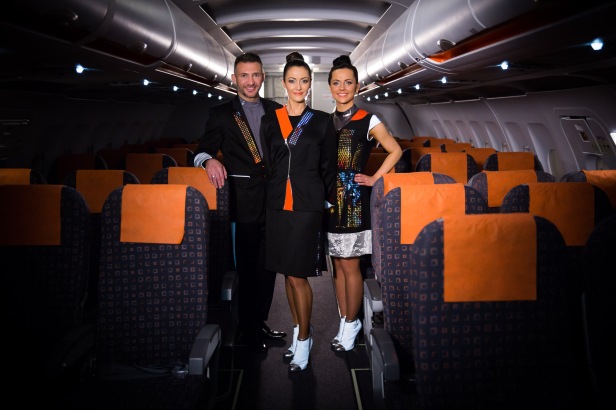 Unlike other airlines who simply continue to adapt to the latest trends in fashion, EasyJet has decided to take it up a notch. The next-gen uniforms, which were designed in collaboration with London-based fashion house CuteCircuit, are equipped with several LEDs for increased visibility and built-in microphones so that engineers, crew and pilots can all talk to one another.

The cabin crew outfits feature LEDs on the shoulders and hems to provide additional lighting in the event of an emergency, and on the jacket lapels to display important information like flight numbers and destinations (in case you forget where you’re going?).

Meanwhile, the engineers’ jackets will come with light-up hoods and sleeves that illuminate work areas and keep both hands free for aircraft inspections and maintenance, along with reflective laser-cut decorations to aid visibility on the air field and built-in video cameras for remote diagnose of technical issues. Aside from that, the garment will be embedded with an air quality sensor and barometer to help monitor work environments and create a map of air quality in different cities.

If CuteCircuit sounds familiar, that’s because you may recall the wearable tech pioneers from some of their previous work which includes LED-laden dresses for celebs like Katy Perry and Nicole Scherzinger as well as tshirtOS — the world’s first programmable t-shirt.

EasyJet will begin a pilot (no pun intend) of the uniforms early next year.