50% of those considering buying a smart wristband will choose a smartwatch instead, says Gartner.

According to Gartner’s most recent report, smart wristbands will decrease in popularity over the next year as consumers will migrate to more all-purpose smartwatch devices. However, the market for smart wristbands and other fitness monitors will experience a resurgence come 2016 because of versatile designs with lower-cost displays, as well as the arrival of smart garments.

While smart wristbands are expected to dip a bit from 70 million units in 2014 to 68.1 million devices in 2015, Gartner suggests this temporary decline in sales will be a result of an overlap in functionality between the bands, fitness monitors and smartwatches.

While these wrist-adorned devices will carry on, Gartner believes the emergence of less invasive devices, particularly smart garments, will potentially disrupt the wearables space. So much so that embedded clothing shipments are projected to rise from a mere 0.1 million units in 2014 to 26 million units in 2016.

For those unfamiliar with the territory, smart garments typically refer to items ranging from t-shirts with bio-sensing circuitry woven into its fibers — which may be able to monitor vital signs more accurately given its larger body surface area — to sensor-laden athletic shoes.

The research firm believes that this product category has the greatest potential for growth going forward because “the category is emerging from the testing phase and smart shirts are available to athletes and coaches of professional teams.” Take for instance, Ralph Lauren’s Polo Tech smart apparel collection which made quite the ‘racket’ at this year’s U.S. Open. In collaboration with OMSignal, the shirt was equipped with embedded sensors, including an accelerometer, a gyroscope and a heart rate monitor. 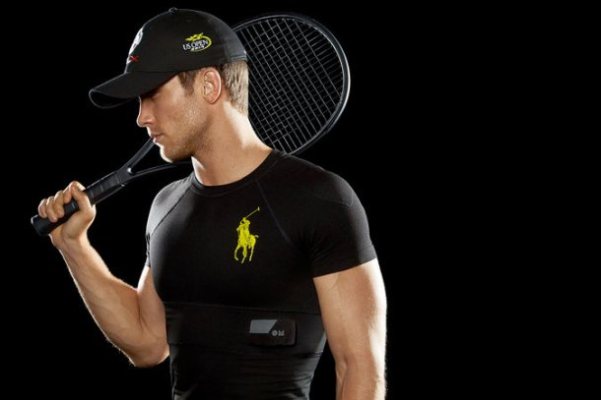 Aside from Polo’s latest breakthrough, Adidas miCoach and Under Armour’s E39 compression shirts, e-textiles have the ability to revolutionize the manner in which data is tracked and measured in healthcare, fitness, military and industrial settings. Writing for Forbes, Robert J. Szczerba recently highlighted an array of smart garment products that are either already or will soon be available:

1)  AiQ Smart Clothing Company produces a line of smart apparel, including conductive gloves for smudge-free touchscreen use, clothes that light up, clothes that give off evenly distributed heat, and even metal mesh clothing that shields the wearer from radiation.

2)  Designer Pauline Van Dongen offers a wearable solar clothing collection. Her coats and dresses integrate solar cells that can charge your smartphone, but be obscured with fabric when not in use.

3)  SmartSox help prevent amputations in diabetes patients who have lost sensation in their feet. They incorporate fiber optics and sensors to monitor temperature, pressure, and the angles of joints in the feet, and alert the wearer or caregiver of any developing problems.

4)  Exmobaby is smart clothing designed for newborn and infants. Sensors monitor vital signs and movement, and send this information to 3G and Bluetooth components that can issue appropriate alerts.

5)  Researchers at Universidad Carlos III in Madrid, Spain have developed an intelligent hospital gown that wirelessly measures body temperature, heart rate, patient location, and whether the patient is sitting, standing, lying down, walking, or running.

“Smart garments is the newest market out there. In 2014 there really are very few of these on the market. They’re more like betas, the few that are actually being sold. But that’s why we see such large growth,” McIntyre added.

This doesn’t take into account the countless number of soft electronics DIY projects either. Inspired to create their very own smart textiles, Makers have embraced various Atmel powered platforms specifically designed for wearable applications, including the Arduino Lilypad (ATmega328) and Adafruit’s FLORA (ATmega32U4), which can be easily daisy chained with various sensors for GPS, motion and light.

Interested in reading more? Check out the latest Gartner report in its entirety here.

Karpati was specifically interested in exploring the relationship between technology and textile arts, which is how Chromosonic was born. The avant-garde fabric uses Karpati’s out-of-the-box technology dubbed “Electronic Programmable Textile Interface,” which enables it to become more sensitive to heat and sound, and to react by producing colorful shifting patterns. 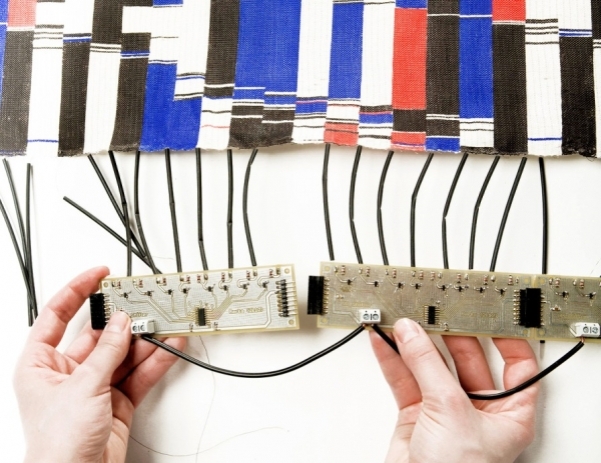 Like a chameleon, the textile alters its patterns based on its surroundings, which is made possible by an [Atmel based] Arduino board, a 12V power supply and nearly 20 custom PCBs. These components control four industrial 24V DC power supplies that are responsible for heating the two moving textile displays — each of which are woven with nichrome wires, screenprinted with thermochromatic dye, and pre-programmed with Karpati’s patterns.

When the power supplies are activated, the wires quickly heat up and the the thermochromatic dyes react to the change in color, ranging from black and blue to white and red. Aside from heat, the textile will also respond to pressure.

Learn more about Chromosonic by checking out the project’s official page here. Interested in chameleon-like clothing? You’ll want to read this, too.

The Atmel-based LilyPad Arduino – designed by Leah Buechley and SparkFun Electronics – is targeted specifically at wearables and e-textiles.

The platform, powered by either the ATmega168V (the low-power version of the ATmega168) or the ATmega328V, can be sewn to fabric and similarly mounted power supplies, sensors and actuators with conductive thread.

Recently, a Maker by the name of Duniken created a sensor demo mat for the LilyPad and posted a detailed description of the build on Instructables.

“I wanted a place where I could experiment with the different sensors, but also something that I could use to show examples of what can be done without constantly uploading code,” he explained.

“Although I had the LilyPad Development Board, I decided to use the LilyPad Simple Board so I could use the extra pins as switches,” he clarified.

After drawing up a diagram using LucidChart, Duniken arranged the sensors and switches on the fabric, using the marking pen to indicate where each pin and component would be placed.

“I removed the sensors and used the marking pen to draw the circuit onto the fabric with a ruler to make sure all of my lines were straight. When I had the lines drawn, I again placed the sensors on the mat to make sure that everything lined up the way I wanted it to,” said Duniken.

“I ended up changing the position of the RGB light slightly so the lines were less likely to make contact with the other pins on the LilyPad. I wanted the lines to be part of the final piece so, once I was satisfied with the diagram, I traced the lines with a permanent marker. If I did it over, I would probably color code the lines so that it can be better used to explain how the circuit works.”

Next, Duniken cleaned off the marking pen, stitched on the sensors and other components, sewed the circuits and sketched the code.

“To ensure that the sensors stayed put while I sewed the circuits, I did a quick stitch with plain thread to hold the components in place. Using the conductive thread, I sewed along each of the circuit lines connecting the different components to the LilyPad,” he added.

“Be careful where the Positive lines (red) cross the Ground lines (black). I used a small piece of plastic cut from the LilyPad packaging to make sure that the lines didn’t short. I used hot glue to tack down the plastic so it wouldn’t snag on anything.”

Interested in learning more about designing your own Arduino Lilypad Sensor Demo Mat? You can check out the project’s Instructables page here.

The Arduino LillyPad – designed by Leah Buechley and SparkFun Electronics – is powered by an Atmel ATmega168 microcontroller or ATmega328V MCU. The board is primarily targeted at wearables and e-textiles, as it can be easily sewn onto various fabrics.

Buechley, along with Kanjun Qiu and Sonja de Boer, recently published a book about the popular LilyPad titled “Sew Electric.” Featured projects include a sparkling bracelet, a singing monster, a light-up bookmark and a fabric piano. Perhaps most importantly, the book introduces readers to the fundamentals of electronics and programming as well as craft and design practices.

“We want the book to get people excited about electronics and programming. We hope it will help people play, tinker, hack and learn,” Buechley told the official Arduino blog in an interview published earlier this week.   ”There are very few engineering resources that are appealing to young women and girls. We wanted to create an electronics introduction that looks and feels different from anything else that’s out there.”

According to Buechley, the Atmel-powered LilyPad has been used in haute couture fashion, sculpture, dog shows, dance costumes and even fabric robots.

“It’s also been fascinating to research and begin to understand who is using LilyPad. A study I did in 2010 found that while only about 2% of people who build Arduino projects are women, about 65% of LilyPad builders are female. [This is] a spectacular discrepancy,” said Buechley. “I think this shows that the Arduino community can benefit tremendously from tools that connect to different materials, communities and creative traditions.”

“They embody appealing juxtapositions–of male and female, soft and hard, new and old,” she explained. “And they’re fantastic vehicles for technological fantasies–bringing to mind the magic cloaks and carpets from fairy tales, the flashy costumes of comic book superheros, and countless sci-fi utopias/dystopias.”

However, Buechley emphasized that companies trying to bring wearables to market are likely to face significant hurdles, at least in the immediate future.

“The timescales of the fashion and electronics worlds are out of sync–though we think of technology as fast moving, clothing styles change much faster, every couple of months,” she concluded. “[Thus far], the most compelling e-textiles work has taken place on smaller scales in the art and design worlds.”

Interested in learning more? You can check out the Atmel-powered Arduino LilyPad here and “Sew Electronics” here.