This drawing robot kit can be assembled into four different configurations: mScara, mCar, mSpider and mEggBot.

If there’s anything we have learned in recent months, it’s that Makers love robotic art. Frankly, who can blame them? It’s pretty awesome. For those unfamiliar with the genre, robotic art refers to any artwork that employs some form of robotic or automated technology. The future behavior of such installations can then be altered by input from either the artist or the participant, which differentiates these from other types of kinetic pieces. 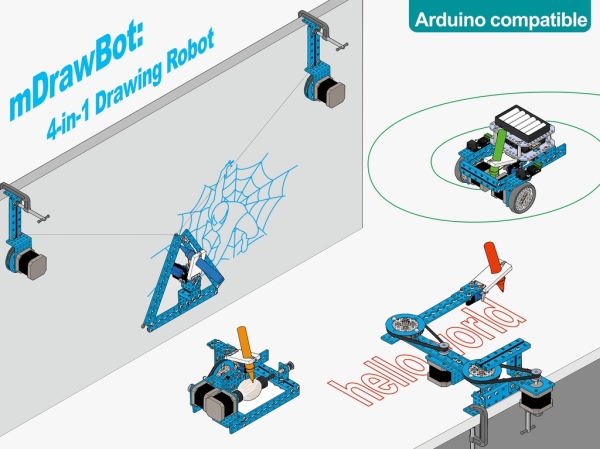 From a bot that can draw on beach sand to one that plots based on heart rate, do-it-yourselfers continue to find innovative ways to leverage the next-gen technology to create fascinating projects. Looking to help facilitate this creativity is the Makeblock team, who has recently launched a new Kickstarter campaign for its mDrawbot, a four-in-one drawing robotic kit that can be easily assembled into a few configurations.

The kit is comprised of over 60 Makeblock components along with some screws and nuts, all powered by an ATmega328 based Makeblock Orion main board. (Though the team does admit that an Arduino Uno can also be used.) Beyond that, custom mDraw software enables users to control any one of the four completed robots: mScara, mCar, mSpide and mEggBot. Once the program is installed, users can simply import SVG images, convert MBP to SVG format, customize a number of parameters, and in the near future, even use a gray-scale laser engraver to etch a project. Designed with convenience and ease-of-use for Makers in mind, each kit can be pieced together in less than an hour.

As its name would suggest, mScara is a SCARA (Selective Compliance Articulated Robot Arm) driven by stepper motors. By installing a pen on mScara, the device can draw pictures on any flat surface. Replacing the pen with a laser diode can even transform it into a desktop engraver. 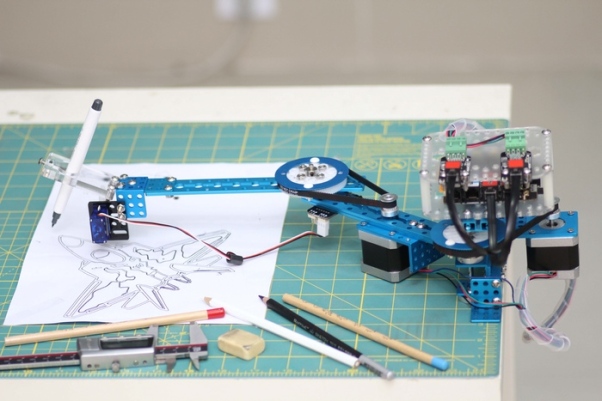 Next, mSpider is capable of scribbling pictures on a wall or a whiteboard as two stepper motors control the movement of mSpider though strings. Theoretically, it can draw in a huge range by increasing the length of its strings.

Ideal for Easter decorations, the mEggBot can be tasked with doodling on things that would otherwise be improbable to print on, including letters on eggs or decorations on ping-pong balls. 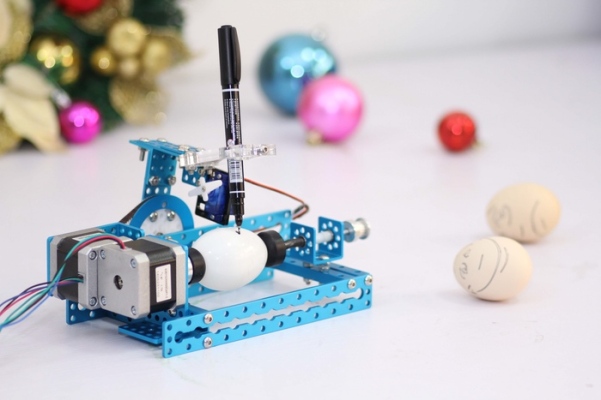 Finally, mCar is a three-wheel vehicle that is driven by a pair of stepper motors as it draws its own movement tracks on a surface. What’s more, if chalk is used instead of a pen, the gadget can sketch things on the floor.

“mDrawBot is a drawbot (or four drawbots), and it’s more than a drawbot. You can re-use the Makeblock robot parts in countless new projects and it’s easy to extend the kit with new parts,” the team writes.

Only limited by their imagination, Makers can do anything from add an accelerometer and gyro sensor to devise a two-wheeled self-balacing vehicle, or throw in some other Makeblock mechanical parts to transform it into an XY plotter. Better yet, the team also plans on offering various upgrade packs including both a Bluetooth module and a laser engraver in the near future.

Interested? Head over to its official Kickstarter page, where the team is already well on its way to garnering $50,000. Shipment is expected to begin in May 2015 — just in time for Maker Faire Bay Area!