Have some fun at the park with this Up-like dog collar.

Inspired by Dug the dog from the Pixar movie Up, Adafruit’s Becky Stern and Phillip Burgess have created a talking collar of their own. Whereas the special contraption from the animated film allowed the pup to communicate with its owner, or more like gives voice to his thoughts, this smartphone-activated wearable lets you have some fun at the park by emitting pre-programmed phrases like “Squirrel!,” “I can smell you,” or “I want that ball!”

Built around the Adafruit’s Audio FX board and Bluefruit Micro (ATmega32U4), the Bluetooth-enabled collar’s sounds are triggered using the Bluefruit LE Connect mobile app. These noises are then played through a mono amp connected to a mini speaker. Meanwhile, the collar itself is made out of a leather belt, along with 3D-printed “greebles” to give it the true look and feel of Dug’s.

You’ll also notice that the device has two LED sequins — one for the faux map screen that stays on all the time, another that acts as a ‘talking’ light and is prompted with each phone command. The first is sliced from the battery pack, while the latter is attached to an analog out on the Bluefruit Micro.

The electronics are housed inside a round pouch on the front of the wearable, while its battery pack lives in the faux tracking box in the back. The unit is powered by three AAA batteries.

So, does this sound like something you’d like for your dog… or for yourself? Head over to Adafruit’s site, where you’ll find an exhaustive breakdown with the schematics, code and even 3D files for the harder-to-find bits.

Buddy is a fully-integrated LED dog collar that’s connecting humans to their dogs like never before.

Currently live on Kickstarter, Buddy is a fully-integrated LED dog collar that does a whole lot more than simply light up with vibrant colors. The latest wearable for pups from Squeaker uses GPS, Bluetooth and Wi-Fi technologies to keep our four-legged friends safe while tracking and organizing their activities in real-time. Did you know over six million dogs are injured or killed on our roads each year? Unfortunately, a large number of those incidents occur at night where visibility is hindered. We can’t always trust the judgement of others, so why take a chance with your beloved pets safety and well-being? That’s why Buddy offers owners a peace of mind by monitoring their daily activity and whereabouts in real-time via GPS, so you know where they are and what they are up to at the press of a button.

While up until now LED collars have been a one color proposition, Buddy is changing the game with a stack of individually programmable lights that allow the device to display an almost infinite amount of unique patterns and color combinations. Meaning, not only will it keep your dog illuminated and clearly visible from potential mishaps with cyclists, vehicles and other hazards, it can do so in style. These hues and sequences can be selected and managed via an accompanying app on your iPhone, Android smartphone or Apple Watch.

In terms of hardware, Buddy is equipped with a microprocessor, a Bluetooth Low Energy module, an OLED display, a three-axis accelerometer, a temperature sensor, a light sensor that can detect the time of day, and a rechargeable battery life of 14 days. Like a Fitbit for dogs, the collar can also track steps, distances traveled and activity loads by collating data from its accelerometer and gyroscope, as well as analyze sleep patterns and vital signs.

To conserve battery power, the Squeaker team developed a Wi-Fi charging dock that communicates with the collar while handling all of the Wi-Fi power demands. Not only does the Buddy base station have its own nifty RGB lighting effects, it can visually alert you if a pet has left the geo-fenced area.

Speaking of which, Buddy enables users to set custom safe zones for their pet. This creates a virtual boundary around specific areas that you setup and control, using geofencing technology built right into the collar and app. Should good ol’ Fido venture out of these pre-defined areas, you’ll be notified instantly and prompted to their location with step-by-step instructions. 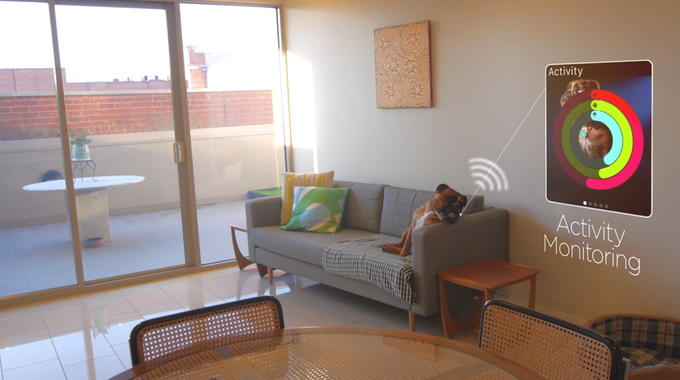 Additionally, the Buddy app has built-in barcode scanning functionality and contains an up-to-date database of the most popular pet foods by vets and other dog professionals. In other words, you can input their daily calorie intake so Buddy can offset this against their daily exercise for a clear picture of their health. This information can then be provided to your vet.

As if all that wasn’t enough, Buddy was designed with the Internet of Things in mind. And so, the intelligent collar easily integrates with your smart home devices. For instance, its embedded temperature sensor will let a Nest thermostat know if your canine companion is either too hot or cold, then adjust accordingly. The wearable can even alert you via your LIFX or Phillips Hue smart bulbs if something goes wrong.

Whew… that’s a lot. But as those with pets know, there’s no such thing as having too much safety and fun when it comes to man’s best friend. Interested? Hurry over to its Kickstarter campaign, where Squeaker is currently seeking $281,233. Units are expected to ship to backers in December 2015.