Sure, you can always go out and buy a smartwatch with a tracker and compass already built-in, or you can do what Ben Hur Goncalves has done and create one of your own with the mighty Arduino. 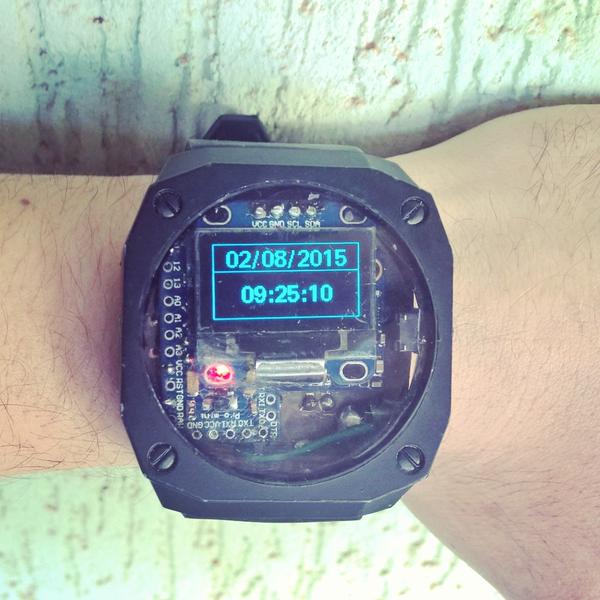 Having been fixated on the idea of devising an all-in-one wearable device for quite some time now, the Brazilian Maker finally got around to mastering the concept. And it’s not just an ordinary timekeeper either. Aside from revealing the time and date, the wrist-adorned piece can measure altitude, monitor temperature, count steps and even help guide you in the right direction.

To accomplish this feat, he used the combination of a 10-DOF sensor (accelerometer, gyroscope, magnetic, barometric pressure and temperature), an I2C OLED display, a button on its side for switching between modes, an old 3.7V cellphone battery for power, and an Arduino Pro Mini 3.3V (ATmega328) for its brains.

Before bringing the gadget to life, he had to first overcome a series of challenges, including working with a compass and Bluetooth, reducing its size and thickness, communicating wirelessly with his Windows Phone, and writing a custom app. However, he quickly found that Bluetooth consumed a bit too much energy, the battery life was dismal, and several of its features were unnecessary. So, he got started on a second iteration of the wearable, which would ultimately lead him closer to his final design.

“I tried to make another with Bluetooth, but one that you could turn it on with a switch. It turned out that switching it on and off resets the Arduino. I figured out that I didnt need the Bluetooth, so I made a second version, with an MPU9150 (compass, accelerometer and gyro). It was a pretty better unit, also with two buttons (I still used resistors on them), larger in size, and less thick than the original,” Goncalves writes. 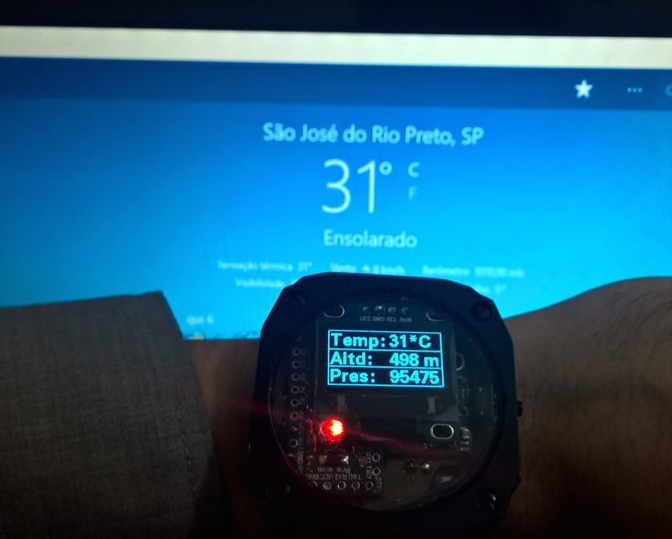 Although it possessed a steampunkish look, it still wasn’t something that the Maker would slap on his wrist and head into public wearing. This time, though, the battery life was much better. Whereas the original only lasted about 60 minutes, the second prototype was able to run for nearly 14 hours. By tweaking its insides and casing, Goncalves was on his way to having a stylish DIY watch that could stay powered for at least a day.

Not only can it display the time and date just like any watch, a few clicks of its side button will reveal the current temperature, altitude, barometric pressure, steps taken and calories burned. In compass mode, north is shown as the device is turned. Intrigued? Head over to Goncalves’ project page here, or watch his detailed demonstration in the video below.

Don’t feeling like buying a smartwatch or waiting around for Apple’s launch in April? You can make your timepiece instead!

Maker James Chin has recently been working on a new watch, controlled by a Pro Trinket (ATmega328) and a real-time clock. The DIY wearable is equipped with a potentiometer under the OLED screen and a momentary button to control the watch.

“But what I think is the best part is on the right. There are female headers that allow me to connect multiple ‘modules’ to it, like the LED shown in the picture.”

At the moment, the Maker has included a white LED, a black light LED, as well as with a switch along the side that he used to play Pong. Moving ahead, Chin also plans on adding a TV-Be-Gone, an XBee, an accelerometer, and some analog sensors. Sounds pretty awesome to us!

We look forward to seeing future iterations of this build. Great find, Adafruit!