Birchbox is to beauty as Thimble is to DIY electronics. Build a new device every month!

The Maker Movement has taken off and diversified the past few years, igniting creativity and innovation in a community of people. For those new to it and interested in getting involved, it can be a bit daunting at first. There’s so much you can build, hack and tinker with, so where do you even start? Makers David Brenner and Oscar Pedroso saw this need, and created a solution to help guide and engage future makers without them feeling intimidated.

After meeting on Hacker News in December 2014, David and Oscar wanted to share their passion for the DIY crowd by finding a way to engage kids and adults in electronics. A year later, Thimble was conceived.

Thimble is a DIY kit accompanied by a learning app, which allows you to build a new electronic device each month. The team has developed a series of monthly kits that teaches users the fundamentals of electronics and how hardware and software come together, so they can innovate and invent from the comfort of their own home. 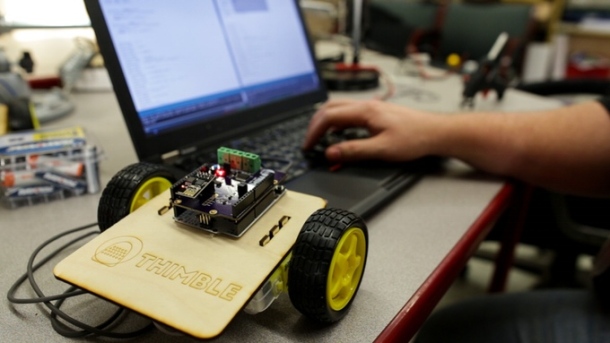 The first kit is a Wi-Fi-enabled robot, controlled by phone, tablet or laptop. The robot arrives with all the components needed to build the project and step-by-step tutorials on the learning app to guide you through the construction process. Additionally, the app provides a community of other Makers to share knowledge and best practices. By the time you finish making your Wi-Fi bot, you will have learned how to create an Android/iOS app that can move things, understand how electricity, motors and microcontrollers work, and have enough knowledge to try out your own ideas to improve the robot. You can achieve this regardless of your age or background knowledge.

At the heart of the robot is an Arduino. You can program its firmware to talk to the Wi-Fi module that comes with the kit. With it, the robot can receive commands over your wireless network and control the motors. Additional parts included in the kit are a printed circuit board, breadboard, wheels, battery holder, cable, terminal blocks, jumpers and more.

Looking ahead, other projects you could receive range from drones, to alarm clocks, to LED cubes, to light control devices for your home. If monthly shipments are too frequent, or you just want to try the first kit out, Thimble can deliver kits whenever you’d like them instead.

Ready to jumpstart your future as a Maker? Head over to the Thimble Kickstarter page, where David, Oscar and the team are seeking $25,000. You can expect to start building and tinkering when the first batch of units goes out for delivery on April 2016.

Build your next great idea in minutes, not hours, with this easy-to-use digital tinkering tool for Raspberry Pi.

Developed by UK-based startup Pimoroni, Flotilla is an educational electronics kit that consists of smart and affordable modules that Makers can connect together to create a number of projects.

Flotilla is comprised of a series of plug-and-play hardware components that are controlled by a Raspberry Pi, but can be programmed via different software interfaces as well, contingent upon the experience of its user. The team has blended smart widgets and software to make the project friendly to Makers of all ages and skill levels. The 12 components include everything from motion and touch, to lights and color, to barometers and numbers, among some others. These are then connected by USB to a Pi via the Flotilla Dock board, and are programmed using web app interfaces. 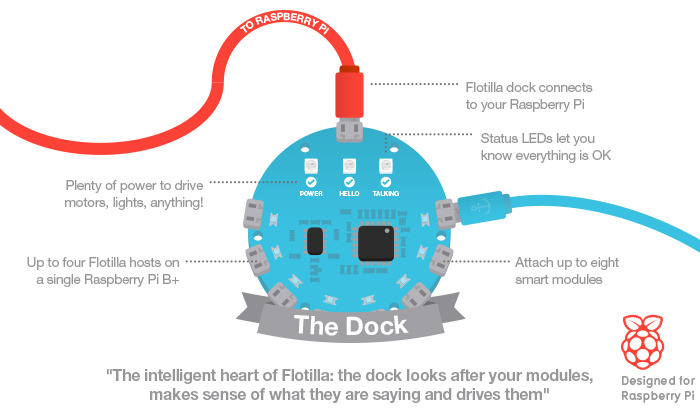 Users are also provided with eight plug-and-play ports for linking their Flotilla modules. However, shall a project require more, you can also plug up to four Flotilla Docks into a single Raspberry Pi B+ — this will enable you to use up to thirty-two modules simultaneously. The pieces themselves are not wireless, so whatever a Maker devises with Flotilla is going to need some cables.

“Flotilla is designed to progress with you as your skills develop. You don’t need any coding skills or electronics knowledge to get started, you can simply plug and play,” its team writes.

At its most rudimentary level, Flotilla offers a pair of web-based resources that can be accessed right from any computer or mobile device. This lets young Makers experiment, learn and build without having to write a single line of code. Pretty cool, right? Users can simply select from a variety of recipe cards labeled with step-by-step instructions to complete projects and create a set of rules that link Flotilla modules together to define their own systems with the Cookbook and Rockpool apps, respectively.

To enable progression beyond this point, Pimoroni notes that it has already added Python support and is working on adding Scratch graphical programming language as well. This is great news for those with some programming experience that want to get into hardware.

“If you’ve ever scraped around the Internet looking for code examples or datasheets to get something working then you’ll know how frustrating it can be. Put that behind you with Flotilla,” the startup explains.

For plug-and-play functionality, the team needed to be able to detect when a device was connected and identify that said device. This meant polling each port of the Flotilla Dock to see if anything changed. Therefore, the Dock is powered by the same class of chip used in a number of Arduino boards, the AVR MCU.

“Its job is to keep a list of all connected devices, their locations and their current state. It communicates with each device in turn to see if it has been disconnected or has a new sensor reading. It then passes that information back to the Host (usually a Raspberry Pi) as serial data over the USB connection. This data is all text-based, human readable, and fairly easy to parse, so we expect it can be used easily by a coder of moderate experience. This also will enable Flotilla to be used with anything that supports Serial over USB in the future.” 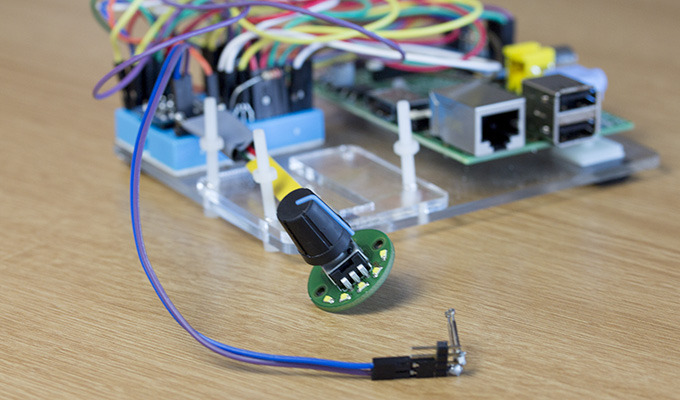 There are eight ports on the Dock that communicate to the Flotilla modules. These all speak via Two-Wire Interface/I2C. However, a recent Kickstarter update revealed that the team turned to versatile tinyAVR for those that were unable to do so by themselves.

“The three modules which absolutely need an AVR-on-board are the Joystick, Slider and Dial. All three of these use exactly the same basic concepts for turning the movement of their requisite inputs into a useful signal; variable resistors.”

Flotilla isn’t the first easy-to-use, modular electronics kits hoping to make a splash on the Maker market. In fact, there are an increasing amount of learner sets available, including those from our friends at littleBits and Adafruit to name just a few. Interested in learning more? You can head over to Flottila’s official Kickstarter page, where the team has just completed a successful campaign garnering well over its initial goal of £32,768.