This DIY watch displays time in flashing LED binary with the push of a button.

From the looks of CES 2015, it appears that smartwatches will undoubtedly be a mainstay for the future. While a number of consumers await the Apple Watch to debut in March, Makers have decided to channel their inner DIY spirit and create a wrist-adorned timepiece of their own instead — without having to dig deep into their wallets. In recent months, we’ve seen some rather impressive designs emerge, ranging from the Arduino-compatible Tardis to the steampunk-inspired ChronodeVFD.

Added to that list is now Maker Sam DeRose’s latest binary device, aptly dubbed The Nerd Watch. Initially inspired by his dad’s Maker Faire project, the watch displays the time in hours and minutes by flashing LEDs in sequence to denote two 4-bit binary numbers. The wearable was crafted using an OMC Othermill CNC machine, and is based on a few electronic components — most notably the ATtiny85. 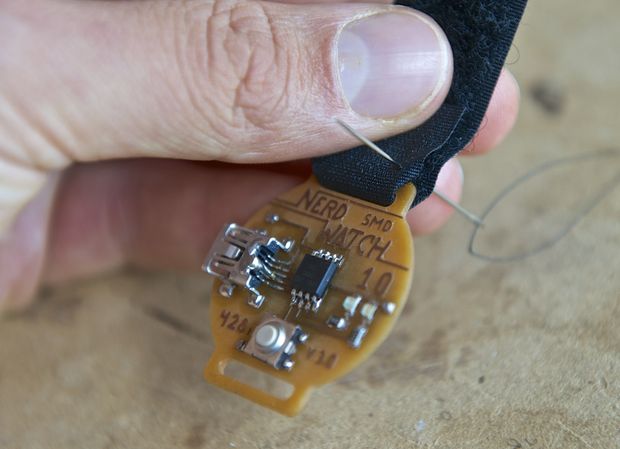 “The [tinyAVR] has a program on it which waits for a button press, and when it senses one it grounds several of its pins so that current can flow from +3-volts through the LEDs, lighting them up. The ATtiny has an internal clock, and so the LEDs are programmed to flash to display the time,” DeRose writes.

Time to create a DIY binary watch of your own? You can find a detailed step-by-step breakdown of the project on its official page here.