Mind control, bionic prosthetics and AI characters are just some of the things that Disney is funding as part of their accelerator in 2015.

Let’s face it, there’s nothing quite as synonymous with creativity, imagination and next-gen technology as The Walt Disney Company. And rightfully so. For decades, the company has encouraged kids of all ages to pursue their dreams and bring their wildest ideas to life. Whether it’s serving as a presenting sponsor of the World Maker Faire or revealing new innovations from its research department, the company continues to tap into the burgeoning Maker Movement. Just last year, the Disney Accelerator was also launched, which gives 10 early-stage startups unmatched access and support over a three-month period.

Aside from mentorship from several Disney execs including CEO Bob Iger and guidance from other big names in tech and entertainment, these up-and-coming teams each receive a $120,000 investment. The 13-week program, which is run in collaboration with Techstars, seeks to preserve the legacy of Walt Disney — the epitome of a true Maker and entrepreneur.

The startups from the 2014 Disney Accelerator have already gone on to reach many milestones since completing the program. All of the brands have either raised capital, been acquired or become profitable since completion, while some of the participants have even unveiled products and services in conjunction with The Walt Disney Company.

For example, Disney integrated characters from its hit film Inside Out into ChoreMonster, a chore-assigning app for children, and have paired with robotics company Sphero, another accelerator startup, to build the official BB-8 droid used in the upcoming Star Wars: The Force Awakens. Since teaming up with Disney, ChoreMonster has doubled its user base while Sphero has raised $45 million in funding.

Among those chosen for the class of 2015 are: Imperson, an artificial intelligence platform enabling fans to have conversations with their favorite movie and TV characters; MakieLab, a startup that lets kids bring personalized toys to life through 3D printing; Open Bionics, a robotics organization creating affordable 3D-printed bionic hands for amputees, researchers and Makers; and Emotiv, a bioinformatics company that employs EEG to track mental performance, monitor emotions and control objects with thoughts.

“Last year’s Disney Accelerator exceeded our expectations on many fronts,” said Kevin Mayer, Chief Strategy Officer of The Walt Disney Company. “We are excited to roll up our sleeves again this year and help these cutting-edge startups achieve their goals.”

Beauty and the LEDs?

Beauty and the Beast lovers, this latest project is for you. In what may very well be the brightest idea (literally) since Zoey’s LED Minnie Mouse costume, Maker mom Teresa Roberts created a Belle-inspired dress that would fit right into any Disney Electric Light Parade.

To bring this idea to life, Roberts used four Lilypad Arduino units (ATmega328) connected to approximately 600 LEDs. The edge of the skirt is outlined with warm white lights, while red lights emit an animated swirling sequence and ultra bright clear lights are set to randomly twinkle. 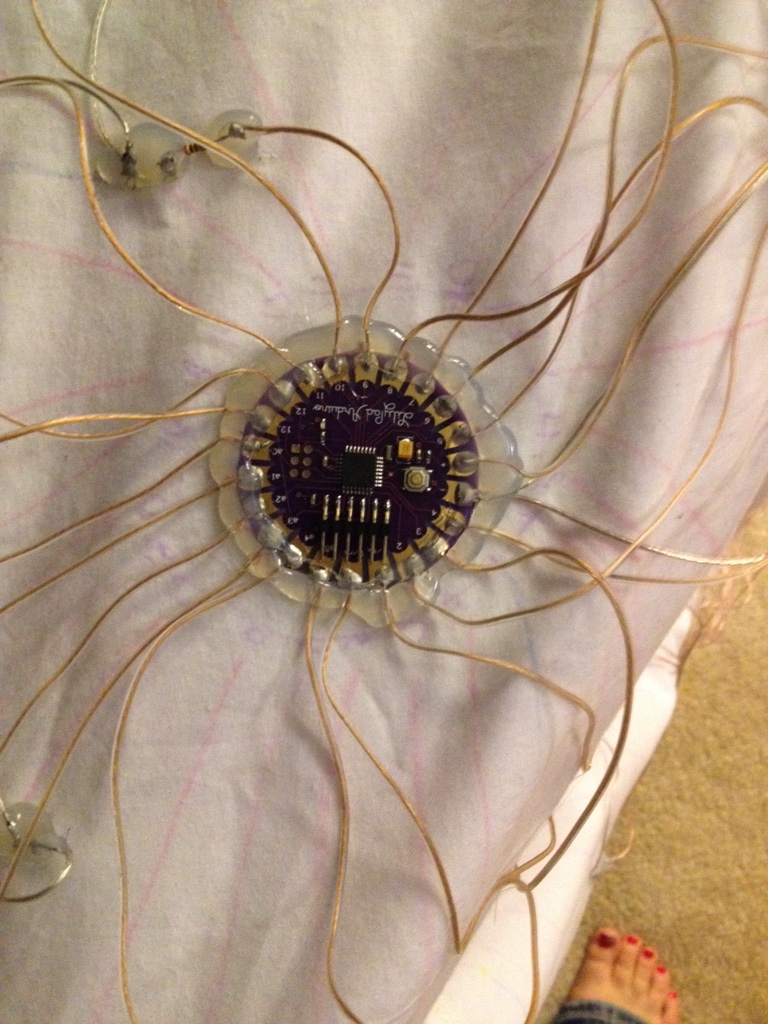 And, what would a Belle ensemble be without her enchanted rose? The character’s signature piece is designed into the dress with some EL wire, which is illuminated in red, white and green. Roberts also used a USB converter for the EL wire, while the dress itself is powered by three C batteries.

In terms of fabric, while originally planning to use conductive thread, Roberts learned rather quickly that would be a daunting task. Instead, the Maker mom turned to thin 24-gauge speaker wire so she wouldn’t have to worry about shorts.

Interested in learning more? You can find a detailed log of her build here, and watch some Disney magic below!

Walt Disney World guests may soon come for the rides, but stay for the drone shows. Just this week, MarketWatch revealed that the entertainment giant had applied for three drone-related patents, each seemingly hinting that Disney would be incorporating unmanned aerial vehicles (UAVs) into all of their magic. According to the report, the three California-based imagineers who applied for the patents were Clifford Wong, James Alexander Stark and Robert Scott Trowbridge, each of them true Makers behind the elaborate attractions at Disney’s theme parks. 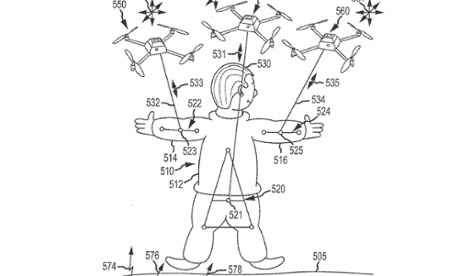 One patent application cites a system in which marionettes or helium-filled balloons could be tethered to and controlled by a fleet of synchronized drones, instead of the traditional puppeteer or handler on the ground. “The inventors recognized that presently there are no mechanisms for creating very large aerial displays such as a display that is reusable/repeatable, dynamic, and interactive,” the patent explains. Can you imagine Aladdin perched atop a drone piloted flying carpet? Or, Dumbo crisscrossing the skies with his floppy ears supported by two UAVs? With these new patents on file, massive aerial balloons during Main Street USA parades could soon become a technology of the past.

“There remains a need for new technologies for generating aerial displays such as a display involving projection of light and images into or out of the sky or an air space above an audience of spectators,” another patent reads. Let’s face it, there’s nothing at Disney quite as magical as its renowned firework and light shows, an area in which could be enhanced through the use of UAVs.

According to Disney’s inventors, the drones would be used to light up with their own display screens, each acting as single pixels in a digital light show, flashing colors to mimic fireworks. Just think of even how more impressive Disney’s Fantasmic can get if these flying robots were involved!

Could drones improve park safety, entertainment value, and attendance? The answer is yet to be determined, but there is no doubt that Disney is willing to take to the skies to find out! Pending all goes well, you may soon find a giant-sized Mickey or Nemo flying through the parks.

Embodying DIY spirit to the max, Disney’s imagineers are no strangers to using complex machinery to create spectacles. In fact, Disney is the Presenting Sponsor of the upcoming World Maker Faire in New York, and we are proud to be featured alongside the creative corporation as a Silversmith Sponsor at this year’s event.

12-year-old Rohan Agrawal is a young Maker who builds robots and tinkers with Atmel-based Arduino boards. According to Mashable, Agrawal spent the last few months at OLogic, a company that has designed robots for both Google and Disney. While there for a summer internship, Agrawal built a ‘bot capable of autonomously delivering bags of potato chips throughout the office.

“I’m self taught,” Agrawal told the publication. “My mom showed me Google once and I was really fascinated by it. I asked her how it works and she told me you use this thing called HTML.”

Agrawal coded his first website by the age of 5, tackled ham radio at 9, joined the Hacker Dojo at 10 and began experimenting with Arduino boards. Soon the young Maker was building small robots boasting basic autonomous capabilities.

“That’s how I got the idea for the autonomous [potato] chip robots,” he said.

“All you have to do is type in a command and it runs a program so it will automatically drive around and randomly select an audience. I’m working on getting it to see if there’s anybody in the room. If there isn’t, it will leave and won’t wait.”

Agrawal is now back at work in his mini-studio, a converted garage with a soldering iron and various electronic items. When he’s not at the studio, the 12-year-old Maker is mentoring others at the Hacker Dojo.

Agrawal’s advice to other young DIY Makers and aspiring engineers?

“If you’re interested in something, don’t be scared to get into it.”