Who knew you could get drunk on data?

You’ve most likely read a tweet, you’ve probably even heard a tweet aloud, but chances are you’ve never tasted a tweet. But that may all soon change, because Clément Gault and Koi Koi Design have developed Data Cocktail, an Arduino-powered machine that whips up cocktails based on, you guessed it, Twitter activity.

Data Cocktail works by scouring the web for the five latest posts mentioning keywords that are linked to available ingredients, represented by differently colored bulbs. (The system will accept either words, hashtags and mentions.) These messages are then used to define the composition of the drink and fill the glass accordingly. The result is an original, crowdsourced concoction whose recipe can be printed out.

“If you’re wondering whether a tweet about Santa Claus in Winnipeg, Canada can take part in generating a cocktail in Nantes, we say yes! Data Cocktail is a machine but it doesn’t exclude a minimum of politeness,” its creators reveal. “Once the cocktail mix is realized, Data Cocktail will thank the tweeters who have, without knowing it, helped at realizing it.”

Its creators reveal that they can easily change the keywords, ingredients and proportions to suit specific events. Meaning, the robotic bartender can make drinks based on everything from election coverage (whether you’re experiencing a Trumpertantrum or feeling the Bern) to what’s trending at any particular moment.

In terms of software, Data Cocktail uses the Processing and Arduino programming languages. A first application, developed in Processing, pilots the device. The requests are performed using the Twitter4J library, while the app processes the data and commands the robotic gadget. 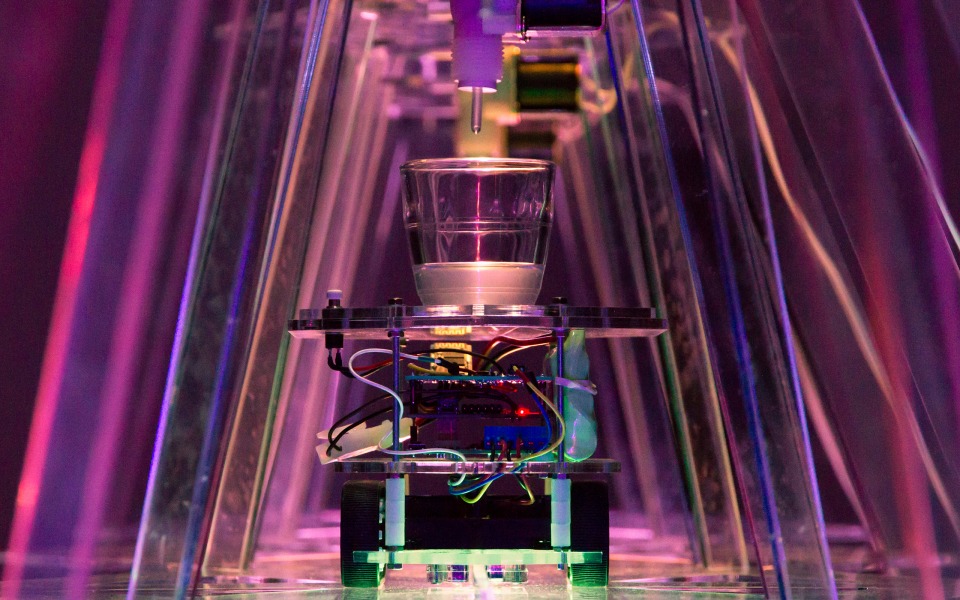 As for its electronics, Data Cocktail is comprised of a robot, solenoid valves and LEDs. The robot is built around a modified Pololu Zumo chassis with a motor shield, a Bluetooth module and an Arduino Pro (ATmega328). Meanwhile, the valves and lights are controlled by an Arduino Due (SAM3X8E) connected via USB.

Intrigued? Head over to the project’s page here, or watch it in action below.