Here’s a closer look at the top 10 cyber security predictions for 2015.

In 2014 worries about security went from a simple “meh” to “WTF!” Not only did high-profile attacks get sensational media coverage, but those incidents led to a pivotal judicial ruling that corporations can be sued for data breaches. And as hard as it is to believe, 2015 will only get worse because attack surfaces are expanding as mobile BYOD policies overtake enterprises, cloud services spread, and a growing number of IoT networks get rolled out. Add m-commerce, e-banking, and mobile payments to the questionable tradition of lax credit card security infrastructure in the U.S. and you get a perfect storm for cybercrime.

In fact, 92% of attacks across the range of segments come from nine basic sources (seen in the diagram below), according to Verizon. More numerous and sophisticated cyber crimes are anticipated for this year and beyond. 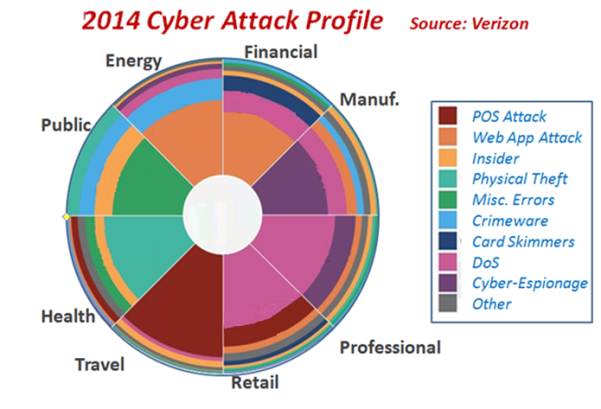 2014 saw the release of highly-evolved threats from criminals that in the past only came from governments, electronic armies and defense firms. A wide-range of targets included organizations in retail, entertainment, finance, healthcare, industrial, military, among countless other industries. As a repeat offender, Sony is now the cyber-victim poster child, and the term “Sony’d” has become a verb meaning digital security incompetence. Perhaps Sony’s motto should be changed from “make.believe.” to “make.believe.security.” Just saying!

Prior to 2014, companies on a wholesale basis tended to simply deny cyber vulnerabilities. However, a string of higher profile data breaches — such as Sony, Heartbleed, Poodle, Shellshock, Russian Cyber-vor, Home Depot, Target, PF Chang’s, eBay, etc. — have changed all of that. Denial is dead, but confusion and about what to do is rampant.

Computing naturally segregates into embedded systems and humans sitting in front of screens.  Embedded systems are processor-based subsystems that are “embedded” into other machines or bigger systems.  Examples are routers, industrial controls, avionics, automotive engine and in-cabin systems, medical diagnostics, white goods, consumer electronics, smart weapons, and countless others.  Embedded security was not a big deal until the IoT emerged, which will lead to billions of smart, communicating nodes.  15 to more than 20 billion IoT nodes are being forecast by 2020, which will create a gigantic attack platform and make security paramount.

A recent study by HP revealed that 70% of interconnected (IoT) devices have serious vulnerabilities to attacks. The devices they investigated consisted of “things” like cloud-connected TVs, smart thermostats and electronic door locks.

“The current state of Internet of Things security seems to take all the vulnerabilities from existing spaces — network security, application security, mobile security and Internet-connected devices — and combine them into a new, even more insecure space, which is troubling,” HP’s Daniel Miessler stated.

These are just the tip of the embedded insecurity iceberg. Under the surface is the entire Dark Net which adds even more treacherousness. Security companies like Symmantic have identified home automation as a likely early IoT attack point. That is not surprising because home automation will be an early adopter of IoT technologies, after all. In-house appliances also represent an attractive attack surface as more firmware is contained in smart TVs, set top boxes, white goods, and routers that also communicate. Node-to-node connectivity security extends to industrial settings as well.

Tools like Shodan, which is the Google of embedded systems, make it very easy for hackers to get into the things in the IoT.  CNN recently called Shodan the scariest search engine on the Internet. You can see why since everything that is connected is now accessible. Clearly strong security, including hardware-based crypto elements, is paramount.

3. More storms from the cloud 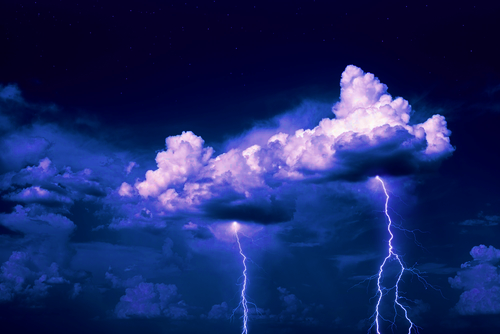 It became clear in 2014 that cloud services such as iCloud, GoogleDrive, DropBox and others were rather large targets because they are replete with sensitive data (just ask Jennifer Lawrence). The cloud is starting to look like the technological Typhoid Mary that can spread viruses, malware, ransomware, rootkits, and other bad things around the world. As we know by now, the key to security is how well cryptographic keys are stored.   Heartbleed taught us that, so utilizing new technologies and more secure approaches to maintain and control cryptographic keys will accelerate in 2015 to address endemic cloud exposure. Look for more use of hardware-based key storage.

eBay, PF Chang’s, Home Depot, Sony, JP Morgan, and Target are well-known names on the cybercrime blotter, and things will just get worse as cyber armies go on the attack. North Korea’s special cyber units, the Syrian Electronic Army, the Iranian Cyber Army (ICA), and Unit 61398 of the People’s Liberation Army of China are high profile examples of cyber-armies that are hostile to Western interests. Every country now seems to have a cyber-army units to conduct asymmetric warfare. (These groups are even adopting logos, with eagles appearing to be a very popular motif.)

Cyber warfare is attractive because government-built malware is cheap, accessible, and covert, and thus highly efficient. Researchers have estimated that 87% of cyber-attacks on companies are state-affiliated, 11% by organized crime, 1% by competitors, and another 1% by former employees. Long story short, cyber war is real and it has already been waged against non-state commercial actors such as Sony. It won’t stop there.

According to security researchers, mobile will become an increasingly attractive target for hackers. Fifteen million mobile devices are infected with malware according to a report by Alcatel-Lucent’s Kindsight Security Labs. Malvertising is rampant on untrusted app stores and ransomware is being attached to virtual currencies. Easily acquired malware generation kits and source code make it extremely easy to target mobile devices. Malicious apps take advantage of the Webkit plugin and gain control over application data which hands credentials, bank account, and email details over to hackers. What’s more, online banking malware is also spreading. 2014 presented ZeuS, which stole data, and VAWTRAK that hit online banking customers in Japan.

Even two-factor authentication measures that banks employ have recently been breached using schemes, such as Operation Emmental. Emmental is the real name of Swiss cheese, which of course is full of holes just like the banking systems’ security mechanisms.  Emmental uses fake mobile apps and Domain Name System (DNS) changers to launch mobile phishing attacks to get at online  banking  accounts and steal identities. Some researchers believe that cybercriminals will increasingly use such sophisticated attacks to make illegal equity front running and short selling scams.

Apple Pay could be a land mine just waiting to explode due to NFC’s susceptibility to hacking. Google Wallet is an example of what can happen when a malicious app is granted NFC privileges making it capable of stealing account information and money. M-commerce schemes like WeChat could be another big potential target.

E-payments are growing and with that so will the attacks on mobile devices using schemes ranging from FakeID to master key. Master key is an exploit kit similar to blackhole exploit kit that specifically targets mobile, where FakeID allows malicious apps to impersonate legitimate apps that allow access to sensitive data without triggering suspicion.

Electronic Health Records (EHR) are now mandatory in the U.S. and a vast amount of personal data is being collected and stored as never before. Because information is money, thieves will go where the information is (to paraphrase Willie Sutton). Health records are considered higher value in the hacking underground than stolen credit card data. Criminals throughout both the U.S. and UK are now specializing in health record hacking. In fact, the U.S. Identity Theft Resource Center reported 720 major data breaches during 2014 with 42% of those being health records.

Targeted attacks, also known as Advanced Persistent Threats (APTs), are very frightening due to their stealthy nature. The main differences between APTs and traditional cyber-attacks are target selection, silence, and duration of attack. According to research company APTnotes, the number of attacks by year went from 3 in 2010 to 14 in 2012 to 53 in 2014. APT targets are carefully selected, in contrast to traditional attacks that use any available corporate targets. The goal is to get in quietly and stay unnoticed for long periods of time, as seen in the famous APT attack that victimized the networking company Nortel. Chinese spyware was present on Nortel’s systems for almost ten years without being detected and drained the company of valuable intellectual property and other information. Now that’s persistent!

9. Laws and regulations try to play catch up

A number of cyber security laws are being considered in the U.S. including the National Cybersecurity Protection Act of 2014, which advocates the sharing of cybersecurity information with the private sector, provide technical assistance and incident response to companies and federal agencies.   Another one to note is the Federal Information Security Modernization Act of 2014 that is designed to better protect federal agencies from cyber-attacks. A third is the Border Patrol Agent Pay Reform Act of 2013 to recruit and retain cyber professionals who are in high demand. Additionally, there is the Cybersecurity Workforce Assessment Act, which aims to enhance the readiness, capacity, training, recruitment, and retention of the cybersecurity workforce. President Obama stated that wants a 30-day deadline for notices and a revised “Consumer Privacy Bill of Rights.”

One of the more interesting and intelligent recommendations came from the FDA, who issued guidelines for wireless medical device security to ensure hackers could not interfere with things such as implanted pacemakers and defibrillators. This notion was is part stimulated by worry about Dick Cheney’s pacemaker being hacked. In fact countermeasures were installed by on the device by Cheney’s surgeon. More regulation of health data and equipment is expected in 2015.

“Security — or the lack of it — will largely determine the success or failure of widespread adoption of internet-connected devices,” the FTC Commissioner recently shared in an article. The FTC also released a report entitled, “Privacy & Security in a Connected World.”

10. Hardware-based security may change the game

According to respected market researcher Gartner, all roads to the digital future lead through security. At this point, who can really argue with that statement? Manufacturers and service providers are seeing the seriousness of cyber-danger and are starting to integrate security at every connectivity level. Crypto element integrated circuits with hardware-based key storage are starting to be employed for that. Furthermore, these crypto elements are a kind of silver bullet given that they easily and instantly add the strongest type of security possible (i.e. protected hardware-based key storage) to IoT endpoints and embedded systems. This is a powerful concept whose fundamental value is only starting to be recognized. 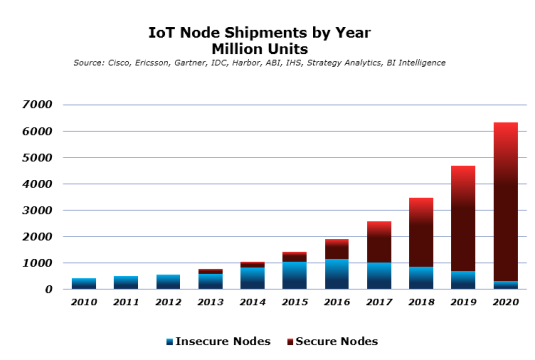 The hardware key storage plus crypto engine combination in a single device makes it simple, ultra-secure, tiny, and inexpensive to add robust security. Recent crypto element products offer ECDH for key agreement and ECDSA for authentication. Adding a device with both of these powerful capabilities to any system with a microprocessor that can run encryption algorithms (such as AES) brings all three pillars of security (confidentiality, data integrity and authentication) into play.

With security rising in significance as attack platforms increase in size and threats become more sophisticated, it is good to know that solutions are already available to ensure that digital systems are not only smart and connected, but robustly secured by hardware key storage. This could be the one of the biggest stories in security going forward.