You think Arduino is popular? Wait until you see some of the numbers our friends at codebender have compiled.

If you’ve ever wondered which Arduino boards are the most popular, which are the most used processors, which are the most common Libraries (and Example) and how are they being used, you’ll appreciate this post from codebender founder Vasilis Georgitzikis. For those of you who may not be familiar with the site, codebender is an online Arduino IDE that enables you to program your ‘duino on the cloud.

“At codebender we have a unique insight on this, since we have more than 40,000 people using codebender to write Arduino code, and more than 100,000 sketches. This gives us the ability to gather anonymous data on board usage, popular boards, etc. And since we host more than 500 built-in libraries, we also get a great view on the preferred Libraries as well,” Georgitzikis explains.

The Most Popular Kid on the Block

First, codebender took a look into the popularity of each Arduino board. The easiest way to count this is to take a look at which board people use most often. They counted how many times people programmed/”flashed” a particular board (say, an Arduino Uno) versus the total number of times someone programmed a board on codebender during September (which was 123,967 times).

Before diving into the data, a few things should first be noted:

So, without further ado, here are the results (showing only boards with more than 1% usage):

Wow! Everyone knows Arduino Uno is the most popular board, but did you know that in more than half of the instances an Arduino is programmed, it’s an Arduino Uno?

“I also personally didn’t expect the Arduino Nano to be so popular, let alone #2! I’m more of a Pro Mini/Pro Micro guy myself, since I’m a bit of a SparkFun nerd. A reason for this spike could be the recent surge of ridiculously affordable Arduino Nano-compatible boards from China, using the very inexpensive CH340G chip for the USB-to-Serial instead of the more common FTDI chip,” Georgitzikis adds.

Another thing worth mentioning is the number of Duemilanove boards still in existence (remember, they are six years old), which are still almost as popular as the Leonardo.

“The Leonardo, by the way, is much lower than I expected. It goes to show that issues with the way the Leonardo’s programming was implemented – the less-than-stellar robustness when programming and all the inconsistencies it brings with existing code and Libraries – outweigh the extra features and lower price,” Georgitzikis shares. “Long live the Uno!”

(By the way, notice that 4 out of the 13 most popular boards are manufactured by SparkFun. Not bad, huh?)

Okay, as mentioned above, some boards are bound to be a bit inflated because their manufacturer suggests codebender as the tool of choice for Arduino coding. Let’s look at the same numbers, this time using only the official Arduino boards.

According to codebender, here are the results (showing only boards with more than 1% usage): 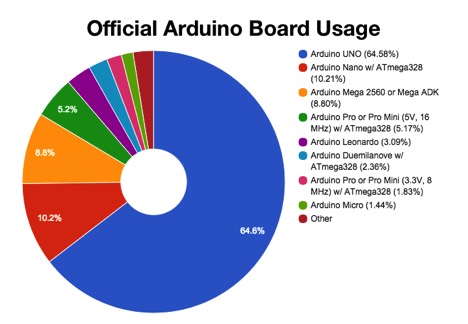 For its last chart, the codebender crew thought it would be interesting to see the most popular microprocessor chip in Arduino land.

On the left chart, they measured the number of boards that use a certain chip. Out of the 80 boards that codebender supports, how many boards use each chip? The right chart reveals the number of times an Arduino is programmed, so you can see how many times people programed a board with a certain processor (i.e. ATmega328), compared to the total number of times people programmed a board.

And the winner is, of course, the ATmega328 by a landslide.

“First, we see that a good third of the boards supported in codebender are using the ATmega328. ATtiny in second place seems weird at first, but given that there are around 20 different boards for the various ATtiny chips and configurations, it makes sense,” Georgitzikis writes. “And then, you have the ATmega32U4 devices. There are a lot of independent manufacturers making boards based on this chip, but as we saw on the previous chart (and as you can see on the Processor Usage chart above), they end up not being used too frequently.”

As you can see on the Processor Usage chart, more than four out of five times someone programs an Arduino, it’s using an ATmega328. Isn’t that simply amazing? (We sure think so!)

Editor’s note: These insights are based on anonymous usage data gathered by codebender.