Instead of buying or building a console, one Maker decided to use the dashboard of an actual car for his ETS2 game.

Like countless other gamers out there, Leon Bataille has always been on the lookout for new ways to make driving simulator games like Euro Truck Simulator 2 (ETS 2) even more immersive. And though homemade steering wheels, pedals and gear shifters certainly enhance the levels of interaction, what better way to really enhance the life-like experience than by integrating the game with a dashboard from a real automobile? 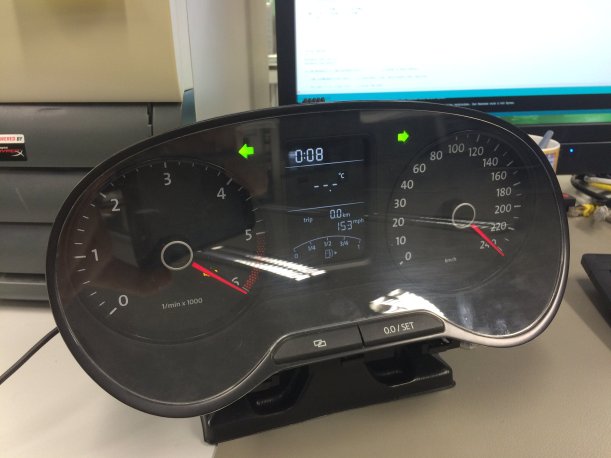 Doing just that, Bataille repurposed the control panel of a VW Polo 6R with the help of the Arduino Uno (ATmega328) and a Seeed CAN Bus Shield, which enabled him to read and record vehicle diagnostics. This project was originally inspired by fellow Maker Silas Parker’s Arduino-driven control panel that was comprised of a cardboard box, servos, LEDs and an LCD screen. Though it was completely functional, knowing that every unit made in the past decade has a CAN bus, all he would need to bring his idea to life was a CAN bus shield for an Arduino along with a dash that could be found at any local junkyard.

Currently, Bataille is in the process of figuring out the CAN bus addresses for each of the relevant dials and LEDs on the dashboard. Though he may still have a little ways to go, he has been able to find the tachometer at 0x280, the signal lights at 0x470, as well as the KPH gauge at 0x5A0. Pair this with a standard computer steering wheel and the telemetry API for ETS 2, and the Maker is pretty darn close to driving a virtual big rig right from the comforts of his own home.

Until then, you can follow along with his build on Hackaday here, and watch it in action below.