Big opportunities ahead for some big industries.

The Internet of Things (IoT) is being hailed as the next big area of growth. The specific predictions vary, but the number of smart devices is anticipated to increase dramatically, with the IoT representing tens of billions of devices in just the next several years. And, while a majority of folks may think this era of constant-connectivity is merely a future filled with ambient objects in their homes that can lower energy costs, watch the outside of their homes and open garage doors from their smartphones, the IoT is actually much more significant than that — especially to the enterprise sector.

As a recent Business Insider study revealed, connected devices and software can offer businesses tremendous benefits, including enhanced security, more effective monitoring of machinery and equipment, improved efficiency and productivity and better energy management, among countless other things. The team at 2lemetry at recently broke down four important estimations for growth surrounding the Internet of Things in the workplace. Here they are…

The global enterprise — which includes factories, office/buildings, transportation and shipping systems, hospitals and health care administration —  device count will reach 9.1 billion by 2019 with a total of 23.3 billion IoT devices. In fact, this space will account for 39% of the approximate 23 billion active smart devices expected come 2019.

Spending on enterprise IoT products and services will hit $255 billion worldwide by 2019, up from $46.2 billion in 2014, according to BI: Intelligence‘s projections.

Several industries are already using IoT, one in particular being industrial machinery with an 18% usage rate. Not far behind are automotive, consumer electronics and telecom and high tech, all three of which have a current 17% usage rate. The fifth industry in this discussion is aerospace and defense, pulling a 15% usage rate.

Writing for Business Insider, Tony Danova notes that the phablets — defined as a smartphone with a screen between 5-inches and 7-inches — will surpass 1.5 billion shipments by 2019. With that, the devices will soon account for 59% of total global smartphone shipments, up from an expected 35% in 2014. As a result, it is believed phablets will outnumber tablet sales three to one over the next five years.

According to a new report from BI Intelligence, the market has been migrating towards phablets over the past few quarters, and that shift is expected to continue as phablets become the go-to smartphone form factor. “While this is a broad definition,” Danova notes, the advantage is that it captures one of the most important trends in the smartphone market in the last couple of years — the phenomenal popularity of devices such as the Samsung Galaxy line.

As the emerging trend continues to favor larger device screens, phablets are expected to remain the fastest-growig smartphone category through 2019, growing at a CAGR of 27%, nearly double the 15% compound rate for the smartphone market over the same period. Phablets have also accelerated the trend of consumer time spent on visually-oriented social media and messaging apps, with the report revealing that more than half of activity on phablets is tied to social networks, such as Facebook, Instagram and Snapchat. 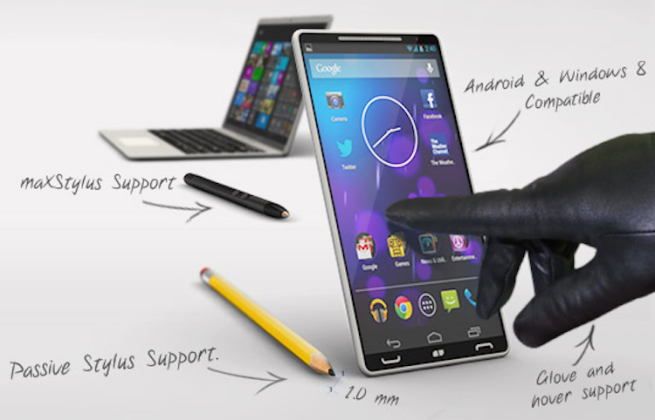 Cognizant of this trend, Atmel recently expanded its popular maXTouch T lineup of touchscreen controllers with the mXT640T, mXT336T and mXT224T. The new devices offer a comprehensive set of features, supporting next-gen mobile devices such as smartphones, phablets and mid-size tablets with touchscreens ranging from 3.2”-8.3.” With 640 nodes, the mXT64xT series of devices are the world’s most comprehensive capacitive touchscreen controllers designed for next-generation smartphones. The mXT640T supports screen sizes up to 6.2″ with a 1.0 mm passive stylus, up to 5.0 mm thick multi-finger glove sensing, and superior moisture touch performance, while also supports up to 7″ for Windows® 8 compliant devices, and up to 8″ for Android smartphones, phablets and tablets.

“The new T Series enables superior touch performance with single-layer sensors as compared to the most recently announced solutions. Simply put, the latest devices will enable Atmel to extend its industry leadership in the large-screen market to the smartphone and phablet spaces,” an Atmel engineering rep recently explained.

Writing for Business Insider, Marcelo Ballve notes that the Internet of Things (IoT) will make many of the familiar objects in our lives connected, as well as accessible via smartphones and tablets.

“This shift to connectivity in once-inert things — the logical next step in the growing ubiquity of the Internet — will force companies large and small to transform dramatically,” said Ballve.   ”But how are the ‘things’ in the Internet of Things actually put together? What elevates an object or device from normal status to a sensor-laden node in the soon-to-be-massive Internet Of Things?” As Ballve notes, a recent BI Intelligence report lists the following 6 primary attributes that will help make “things” a part of the rapidly evolving IoT:

According to Reza Kazerounian, Senior VP and GM of the Microcontroller Business Unit at Atmel, the IoT is a combination of multiple market segments, tens of thousands of OEMs and hundreds of thousands of products.

“It is seen by many as the next wave of dramatic market growth for semiconductors. If you look at the different estimates made by market analysts, the IoT market will be worth trillions of dollars to a variety of industries from the consumer to financial, industrial, white goods and other market segments,” he told EEWeb in February.

“Companies that provide cloud-based services, service providers and semiconductor companies will also benefit from this market. The number of small or new companies that are showcasing connective devices has increased – there will be 50 billion connected devices by 2020. These nodes will have characteristics such as low-power embedded processing, a human-machine interface and connectivity.”

Reza also pointed out that Atmel views microcontrollers (MCUs) as an essential building block for every PC, consumer device, industrial machine, home connectivity device and automobile. To be sure, MCUs are playing an increasingly critical role in the lucrative space.

“As the semiconductor industry has transitioned from PCs to mobile, IoT will now rise to become the predominant market,” he added. ”This transition will favor ultra-low power and integration of microcontrollers, wireless connectivity, security, touch technologies and sensor management products.”

Interested in learning more about the IoT? You can check out Atmel’s recent IoT SoMa panel on the subject here, Patrick Sullivan’s EELive! 2014 presentation and our extensive Bits & Pieces IoT article archive here.