This Raspberry Pi HAT features an 8×8 RGB LED matrix, a five-button joystick and a number of sensors.

The Sense HAT is a sensor-laden, add-on board for the Raspberry Pi that will soon be headed into space as part of the Astro Pi mission.

For those familiar with the initiative, Astro Pi is a collaboration between Raspberry Pi, British astronaut Tim Peake, UK Space and the European Space Agency that was formed to offer students a chance to devise their own experiments and run them in space. In December, a pair of RPi computers will be connected to a new Astro Pi board and sent to the International Space Station. During the mission, the astronaut will deploy the units in a variety of locations onboard the ISS, load up the winning codes while in orbit, set them running, collect the data generated and then download this to Earth where it will be distributed.

As for the Sense HAT, the board is packed with a gyroscope, an accelerometer, a magnetometer, a temperature sensor, a barometric pressure sensor and a humidity sensor, as well as a five-button joystick and an 8×8 RGB LED matrix — all powered by an LED driver chip and an ATTiny88 MCU running custom firmware. By attaching the board to your Pi’s GPIO pins, Makers can use the integrated circuit-based sensors for any number of experiments, apps and games. Raspberry Pi has also devised a Python library for easy access to everything on the HAT.

“The Sense HAT was originally developed around James Adams’ idea to make a cool toy-style board that showed off just how much you could do with your average modern MEMS gyroscope, 64 RGB LEDs and some Atmel microcontroller hackery,” the team writes. “Somewhere between prototype and production, it seems to have attracted extra features like a pressure sensor, a humidity/temperature sensor and a teeny joystick.” 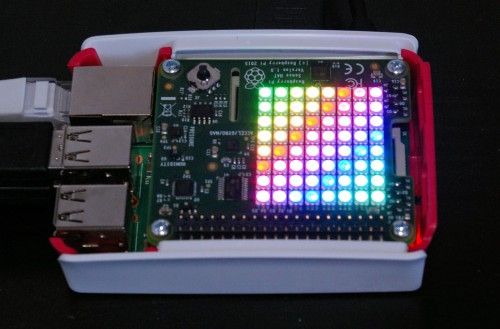 The LED matrix will provide a feedback mechanism and enhanced interactivity for astronaut Tim Peake when he’s tasked with deploying the Astro Pi board on the ISS. One of the winning entries – Reaction Games – has even programmed a whole suite of joypad-operated games played via the LED matrix. According to the Raspberry Pi crew, Snake is hilarious on an 8×8 screen!

“The Atmel [MCU] is responsible for sampling the joystick. We didn’t have enough pins left on the Atmel to dedicate the five that we needed to sample the joystick axes independently, so they’ve been spliced into the LED matrix row selects. The joystick gets updated at approximately 80Hz, which is the scan rate of the LED matrix,” its creators explain. “All of the sensors (and the base firmware for the Atmel) are accessible from the Pi over I2C. As a fun bonus mode, the SPI peripheral on the Atmel has been hooked up to the Pi’s SPI interface – you can reprogram your HAT in the field!”

Intrigued? Head over to the Raspberry Pi blog, where you will find an elaborate log of the Astro Pi mission.

Botani.st helps you monitor and analyze your garden environments with ease — and prevents you from killing your plants again.

Many find gardening to be a rather enjoyable hobby, where after buying and planting seeds, you watch your soil transform into an array of beautiful plants. However, for others, the activity can be downright frustrating as those seeds fail to flourish or your greens begin to wither.

Luckily, the Botani.st crew has developed a smart gardening assistant that will not only monitor your plants, but act before it’s too late. The project was first conceived as a way to provide folks with an affordable solution that would place countless sensors throughout their gardens, which in turn, would generate the amount of environmental and plant health data needed to make accurate recommendations. Secondly, with the Maker community in mind, its creators wanted to ensure that it was not only open-source, but modular so that others could build both hardware and software for it.

The system itself is comprised of a gateway, a hub, some sensors and a smart outlet. First, the sensors are tasked with measuring a plant’s environment, like soil moisture, temperature and light, as well as gathering data from external sources such as weather sites. This collected information is then processed, analyzed and compared with desired values using an easy-to-follow web and mobile dashboard — all that data is also archived for comparison with previous years. From there, users can create events based on the analysis. For instance, a user will receive a notification on their smartphone if they happen to be overwatering, or if it gets too cold in their greenhouse, they will be informed to utilize the smart outlet to start a heater. 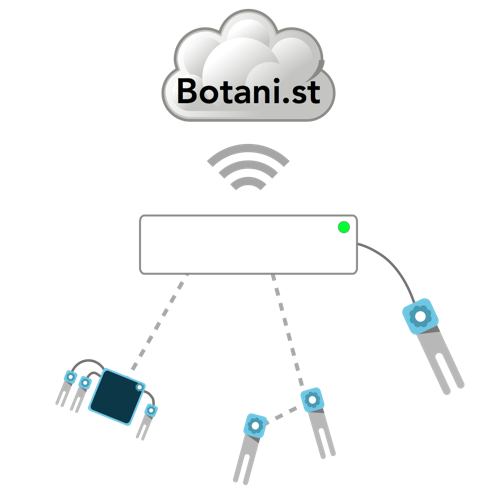 “One thing we recognized early in our design phase was that people who grow in greenhouses doesn’t mind having cords, hoses and steel wires around so there we could go with wired devices. This not only allows us to skip radio hardware but also batteries and a lot of other hardware in the sensors itself to keep costs down,” team member Claes Jakobsson explains.

And so, the crew devised a hub that would provide the necessary power and connectivity along with a gateway that would link to their service through Wi-Fi, yet still be compatible with wires when available.

What’s nice is that users can add multiple gateways to their account — something that will surely come in handy should barriers like concrete walls severely reduce the RF signal or for when trying to reach parts off in the distance. Beyond that, if the device happens to lose contact with Botani.st’s service, its built-in memory will store all of the data and automatically sync right back up when running again. Each hub consists of eight ports, which can handle up to 64 devices (via an extender) and a micro-USB port if battery proves not to be enough.

As eluded to above, the system comes with both wireless and wired sensors. Ideal for those outdoor and indoor settings where cords might be unwanted or inaccessible, Botani.st’s wireless sensors can be recharged using both battery and solar cells, and are entirely waterproof to withstand rain and watering. In addition, an LED indicator reveals the current status — green if everything is okay, orange if a minor problem and red if an urgent matter that requires attention.

As for the radio portion of the project, this required something with extremely low power consumption, ease of use, few external components, and as any startup will tell you, minimal cost. Lo’ and behold, it wasn’t before long that the team employed the Atmel | SMART SAM R21. Meanwhile, its tethered counterpart — which is based on ATtiny48/88 — packs most of the same functionalities, except without radio, battery and solar cell.

“We looked at many options from Texas Instruments, NXP, Nordic Semiconductor and more and had almost settled on a chip when Atmel presented the SAM R21 which combined a ARM Cortex-M0+ with their RF233 802.15.4 radio. The SAM R21 was an excellent match,” its creators note.” With the Xplained evaluation kits we could very easily get going. Now we run on our own boards with a PCB antenna that gives us about 50 meter range in free-line-of-sight. However, since the Atmel LWMesh stack that we use provides automatic meshing, we are confident that this range won’t be a problem even when there are obstructions in the way.” 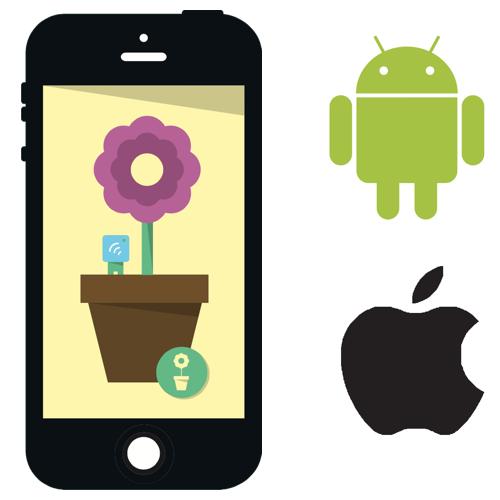 “Since we had plenty of prior experience with AVR MCUs, and the fact that it’s a hugely popular target for Makers, it’s was a no-brainer to build on that. Especially thanks to the big span of possible MCUs, from the very tiny 6-pin ATtiny to large 100-pin ATmega,”Jakobsson discusses their MCU selection for the wired sensors. “Having it being provided in both 28-DIP and 32-TQPF has eased during prototyping and the 28-QNF and 32-QFN packages will make it possible to save precious PCB space in production.”

At the moment, Botani.st continues to work hard on finalizing the hardware and software components to their smart gardening platform. And once completed, they will be releasing example schematics for both the sensors and actuators as well as a SDK for AVR that will enable DIYers — and other plant aficionados — to create their own platform.

“What most excites us about using Atmel apart, from their strong Maker popularity (of course), is the availability of affordable tools such as AVR programmers and excellent documentation. Having an open-source toolchain in the form of gcc both for AVR and ARM is also a huge plus.”

Getting ready to plant this spring? Head over to the the project’s official page here.

In an attempt to make sous vide cooking more accessible to the home chef, the team behind the Nomiku Immersion Circulator recently turned to Kickstarter to unveil a new prototype that features Wi-Fi connectivity.

Its creators describe sous vide cooking as “cooking food in a low temperature water bath while your ingredients are under a vacuum seal in a plastic bag.” In fact, cooking food at a sustained temperature in a sealed environment allows for the most delicious and ideal chemical reactions to occur within food. Interestingly enough, sous vide cooking doesn’t fall in line with the “quick and easy” mantra of many modern meals. That said, even though it takes slightly longer than a microwave dinner, the end result is undeniably tasty.

Catering to the rapidly growing Internet of Things, the newest evolution of the Nomiku includes Wi-Fi connectivity, which enables the clip-on device to be controlled by a smartphone. To further streamline the product, the team developed a single knob for controlling temperature, in addition to a fully-functional touchscreen. Compared to its original design, the recently-unveiled Nomuku clips to the front of the pan rather than the back, and can work with as little as 1.5 inches of water depth, while heating with an impressive 1200W of power.

Embedded with an ATtiny88 MCU, the Nomiku is equipped to receive inputs from the accompanying Tender smartphone application. Tender — available on both the iOS and Android platforms — grants users the ability to share recipes throughout the sous vide cooking community. With a few clicks and the correct ingredients, a home chef could have a Gordon Ramsay-like recipe brewing on their stove in just a matter of minutes.

With all of these additional features, the second iteration of the Nomiku Immersion Circulator (unsurprisingly) reached its $200,000 Kickstarter goal in a matter of 12 hours, garnering just over $750,000 throughout its campaign. Previously, sous vide cooking has been reserved for high-class restaurants and foodie-centric reality shows. With the widespread adoption of the Atmel powered Nomiku, a true home food revolution could be at hand… or well, clipped to your pan.

“We wanted everyone to create restaurant quality food in their own kitchen.” CEO Lisa Fetterman explains. To further grow the home sous vide chef community, the Nomiku team plans to constantly release recipes on their blog and through their various social media accounts.

To learn more about or to pre-order the Nomiku, you can head over to their official page here.