Dubbed the ChronodeVFD, the wearable device is built around a IVL2-7/5 VFD display tube. “I originally purchased a few of these tubes to build a standard desk clock, but after playing around with them, I realized I could probably build a wristwatch too,” the Maker writes.

De Cristofaro notes some of the features which made the tube well-suited for this purpose, including its size (only 1.25″ x 2.25″), its flatness making for a sleeker watch design, its low-grid voltage (12-13V), as well as its nominal 60mA filament current at 2.4V. 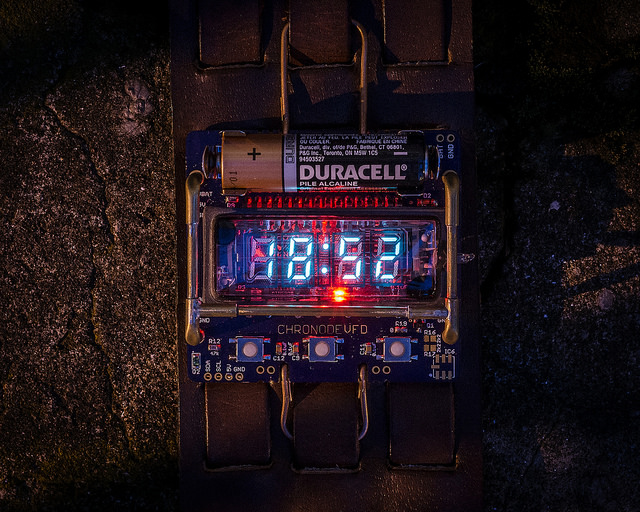 “One other feature that I like about this device is that unlike nearly every other VFD tube, the IVL2-7/5 has no opaque or diffuse backing behind the digits. It’s completely transparent front to back, which means that if you put it on top of a circuit board, you can (with a bit of backlighting) see the PCB below.”

Since the device was merely a costume piece, the Maker elected to find use a battery that lasted between 6-10 hours. However, despite its novelty, he wanted to ensure that it would be comfortable enough to wear and not too bulky.

“Coin cells were out because the internal resistance was too high to meet the current requirements, so I was left with AA and AAA single cells. I decided to go with alkaline cells, since the lower nominal voltage of NiMH re-chargables would mean an even lower efficiency for the boost converters, and less current for the filament. The finished project can be used with either 1xAA or 1xAAA alkalines (with the appropriate clips), however AAAs only last about 2 hours, so I’m sticking with AAs for now,” De Cristofaro explains. 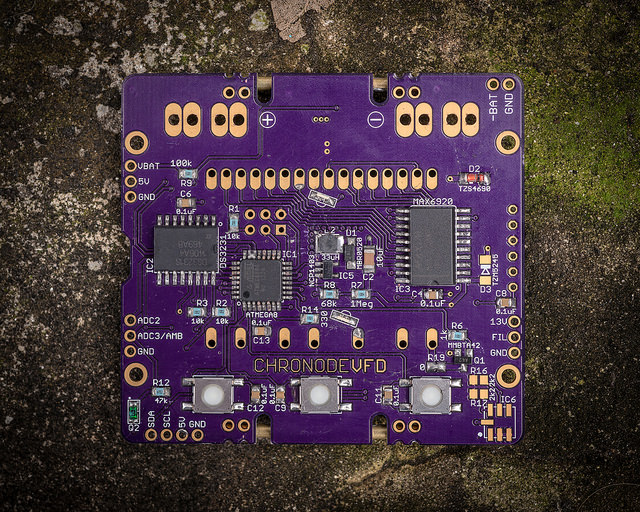 At the core of the wearable device lies an ATMega88 microcontroller, while the real-time clock is a Maxim DS3231. The VFD display is driven by a Maxim MAX6920 — a 12-bit shift register with high-voltage (up to 76V) outputs. In addition, the circuit itself is powered from three voltage rails, and there a few onboard sensors — one analog and two digital.

There are also a number of mechanical innovations featured in this build, most notably the brass tubing that frames the display.

Interested in reading more about this slick Steampunk build? Hurry on over to the ChronodeVFD’s official project page here.