If you’re a fan of Halo, at some point you’ve probably thought that having an energy sword would be a good idea. For better or worse, you can’t obtain one of these weapons (yet), but the Ruiz Brothers at Adafruit have come up with the next best thing: a 3D-printed replica that uses programmable LED strips to make it glow.

These strips are controlled by an Adafruit Feather 32U4 Bluefruit LE (ATmega32U4), enabling them to be programmed for excellent effects, like changing colors and powering on the lights in a sort of slow powerup pattern. Since this Feather has Bluetooth capability, the sword can even be controlled with a smartphone with no physical access to the board.

Besides Bluetooth, another neat feature of the Feather is that it has a battery charging circuit built-in. This allows the sword’s 2000mAh lithium-ion battery to be charged without adding any additional hardware. A switch is, however, added to turn the unit off when the owner isn’t busy pretending to pwn noobz with it.

The blades are printed with transparent PLA, and the sword, including the handle, is made in 20 sections attached together with super glue. Despite its 34-inch blade, it impressively weighs under one pound.

If this all seems a little familiar, you might recall either of the Ruiz brothers’ Daft Punk helmet builds — you can find more info on Thomas’ helmet replica here.

It’s no secret that LEGO has been the perennial building blocks for DIYers spanning across decades. And, it’s also no surprise that the bricks are being paired with the Arduino open-source platform. Together, they are enabling Makers to bring their wildest ideas to life. If you recall, late last year, Arduino co-founder Massimo Banzi announced the launch of the company’s first 3D Printer: the Arduino Materia 101. The device, which is powered by an Arduino Mega 2560 (ATmega2560) and a RAMPS 1.4 shield, is currently available for pre-order. In an effort to lower the barriers of entry and get Makers started, our friends have published a series of tutorials, including this LEGO-compatible servo holder and Arduino Micro casing from Kristoffer.

First, the Maker designed a brick using the parametric 3D modeler FreeCAD, which is capable of holding a small servo. The 3D-printed brick itself is comprised of two 2×4 LEGO pieces, that joined together, serve as the project’s base. Next, make a hole for the servo, carve out a groove for the cable, extend the cylinders beneath the brick, and like that, your piece is just about complete. As Kristoffer notes, print your piece standing up with the side with the open cylinders facing downwards (as pictured above). Now, you can easily add wheels to LEGO robots and use variously-sized servos. Follow Kristoffer’s 10-step tutorial to get started.

Meanwhile, this isn’t the only LEGO-comptaible, 3D-printed piece the Maker has whipped up recently. Kristoffer also designed an enclosure for the highly-popular Arduino Micro (ATmega32U4) using a Materia, which can beused together with this DIY power function IR receiver. 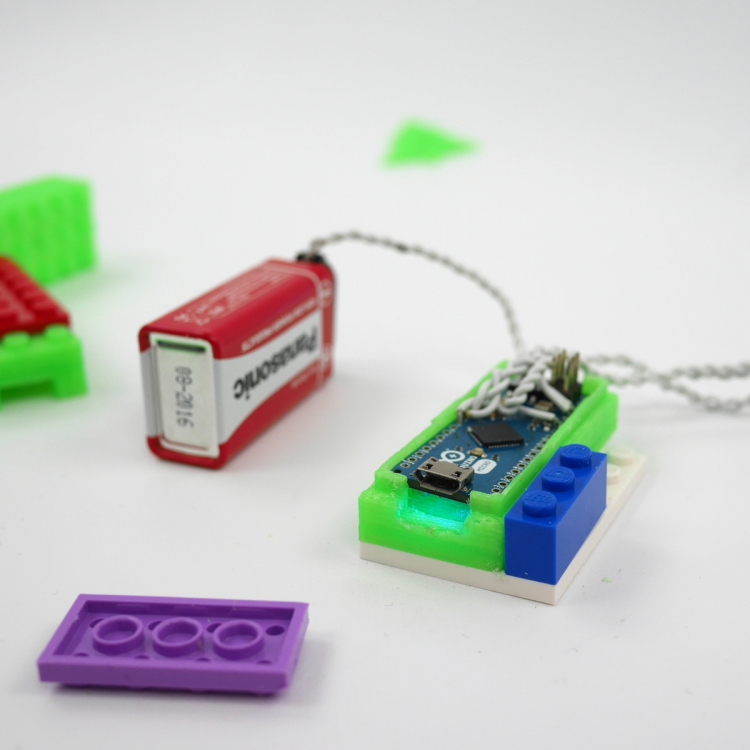 In order to make the casing as minimal as possible, the Maker used a Micro without header pins. Meaning, Makers looking to create one of their own will have to solder straight onto the Arduino PCB board itself. However, in true open-source fashion, Kristoffer encourages anyone to modify the design to accommodate for the ATmega32U4 based Arduino with headers or something else.

Interested? You can head over to his step-by-step breakdown of the project, and download all the necessary FreeCAD files here.