During the week of ARM TechCon, Atmel expanded its Atmel | SMART portfolio with the debut of the SAMA5D4, a new series of high-performance microprocessors (MPUs) based on the ARM Cortex-A5 processor. The SAMA5D4 offers OEMs seamless technology for Internet of Things (IoT), consumer and industrial applications including control panels, communication gateways, imaging terminals and more. 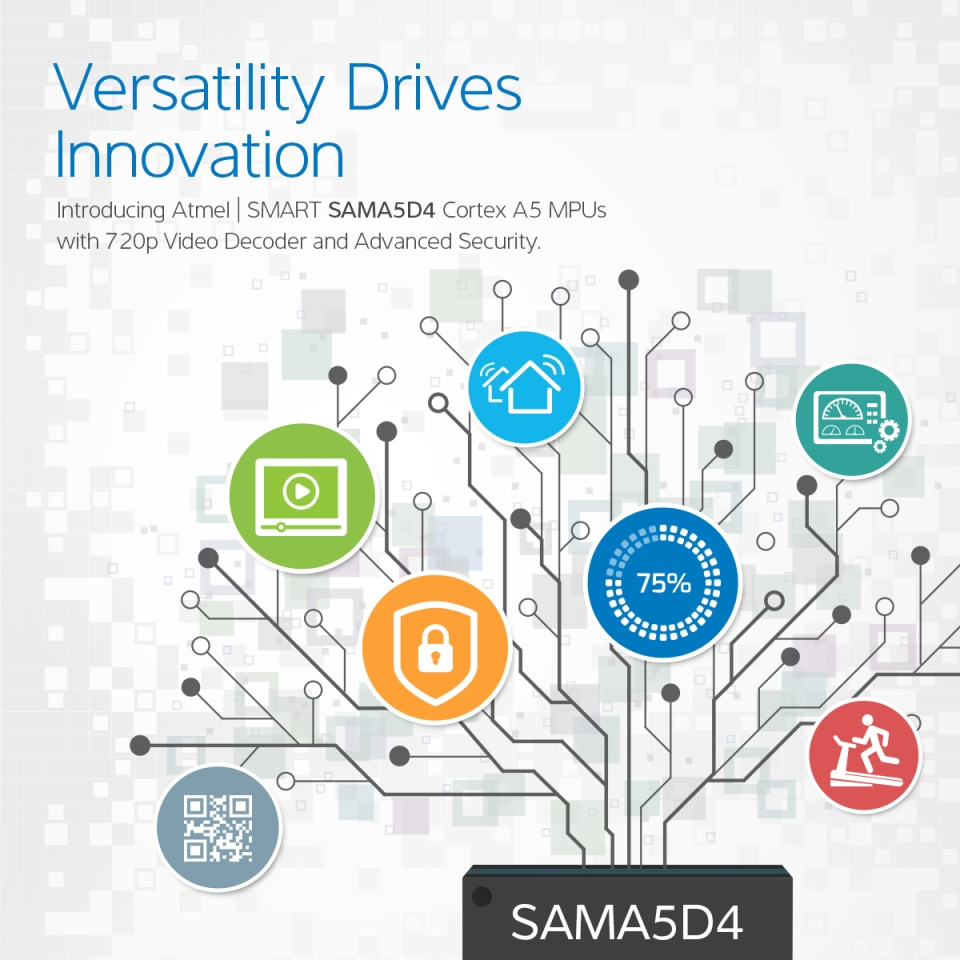 At ARM TechCon 2014, Atmel Product Marketing Manager Laurence Barberis talked with the folks at ARM about the newly-announced expansion of Atmel’s ARM Cortex-A5 based MPUs. 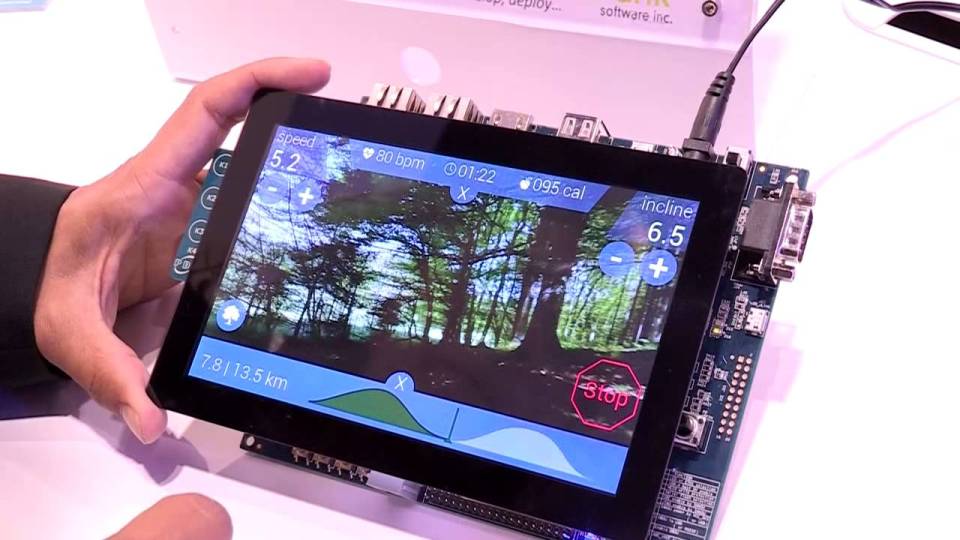 Barberis also showed off a recent demo of the SAMA5D4 MPU running a treadmill application built with Crank Software’s Storyboard Suite. The application features video playback and a touchscreen with multiple controls that can be used to interact with a treadmill to adjust things such as speed and incline, as well as display data like heart rate, distance, and accomplishments.

Atmel has announced that it has expanded its Atmel® | SMART portfolio with the SAMA5D4, a new series of high-performance microprocessors (MPUs) based on the ARM®Cortex-A5 processor. The SAMA5D4 offers OEMs seamless technology for Internet of Things (IoT), consumer and industrial applications including control panels, communication gateways, imaging terminals and more.

“With the large market acceptance of the Atmel SAMA5D3 Cortex®-A5-based MPUs, we are continuing to shape experiences surrounding the user interface for industrial and consumer applications. The SAMA5D4 enables the addition of video playback to control panels and displays at an unrivalled cost point,” explained Jacko Wilbrink, Atmel Senior Director of MPUs. “Security and counterfeiting are becoming growing concerns within the rapidly growing IoT market. These applications require MPUs with advanced encryption while maintaining the same level of high performance. Atmel® | SMART™ SAMA5D4 is positioned to deliver the security and performance many Internet-connected systems require.”

Featuring an ARM NEON™ engine for accelerated signal processing for multimedia and graphics, the SAMA5D4 runs up to 528MHz and includes a 720p hardware video decoder, along with 128kB L2 cache for improved system performance. The MPU integrates powerful peripherals for connectivity and user interface applications including a TFT LCD display controller and dual EMAC.

To evaluate and prototype your application, Atmel provides a kit covering all SAMA5D4 devices, including a 7-inch capacitive touchscreen. A Linux distribution and a graphic user interface demo with video playback based on Qt5 are made available for initial demonstration.

For those interested, SAMA5D4 samples are now available while production is ramping. Evaluation kits are available using order code ATSAMA5D4-EK for $695 each.

The SAMA5D4 series is comprised of four devices and is shipping in BGA289 and BGA361 packages. Pricing for the SAMA5D43 with the 720p hardware video decoding option starts at $8.95 USD for 1,000-piece quantities.

The newly-unveiled MPU will be on display this week at the Atmel booth (#205) at the ARM TechCon. Visitors will have a chance to explore a number of additional hands-on demos including:

Turns out, your next family member may neither be flesh nor blood; it may consist of aluminum, plastic and microcontrollers instead. Created by Dr. Cynthia Breazeal, Director of the Personal Robots Group at MIT Media Lab, the world will soon have its first family robot. Standing at only 11 inches tall and weighing just six pounds, Jibo makes quite a big impression.

Stemming from her fascination with “Star Wars” and observations of NASA robots on Mars, Dr. Breazeal sought out to develop a ‘bot that could engage in human interaction.

Out of the box, Jibo has the ability to learn about those around it, recognize various voices and distinguish different faces. Designed to engage with people, Jibo takes on various roles around the house including mail deliverer, environment controller, storyteller, telepresence device, event reminder, and cameraman. Not only can it sing and dance, engage in casual conversation and complete daily tasks, its creator hopes Jibo can play an integral role in educating children, healthcare management and aiding the elderly.

“Jibo is this helpful presence that helps support your family, your human network, to be more efficient and feel more connected,” says Dr. Breazeal.

Jibo began its crowdfunding campaign on Indiegogo this past Wednesday, in hopes of reaching a $100,000. According to Dr. Breazeal, the crowdfunding approach is their way of getting feedback on the prototype from the most interested community of bot-enthusiasts out there. Well, it appears there are several as the project as already raised over $635,000 in a matter of days. The bot is currently selling for $499 to consumers and $599 to developers.

“Because JIBO is an open platform, his skills and applications will grow, helping and delighting in ways even we haven’t even imagined,” a rep shared on its official Indiegogo page.

As GigaOM notes, ”the startup would like to see developers pair Jibo with connected devices. A Nest thermostat would still do its job of tracking your patterns and adjusting your home’s heating and cooling, but Jibo would act as its face. Instead of programming the thermostat through your phone, you would just ask Jibo to take care of it.”

If you’re looking for the newest (robotic) addition to your household, it looks like you may have to wait just a bit. Jibo’s slated arrival isn’t until the fall of 2015, more than a year away.