Tenaya Hurst offers some words of wisdom for Makers around overcoming failures.

Even in the Maker world, successes are celebrated sometimes more often than the failures. The wins are documented more than the short-comings. It is because of this that I would like to discuss publically my epic continual failures with my favorite project Arduweenie. And of course, on the eve of the epic success!

Arduweenie started out so successful. I had my Arduino Uno. I knew exactly which pins to connect following the succinct but sufficient explanation from Andrew Milmoe of the Make SF meetup group. Then using a photo from Rebekah Nelson, Prinda started a Twitter feed, thanks Tech Museum Open Make 2014! I had confidence and all my students loved Arduweenie. He was a big attraction at Maker Faires, and it appeared everything was going great.

I wanted to make a second ‘weenie for World Maker Faire 2014, and when I ordered the new LED strip, I assumed it would come with the power supply and female adaptor required (but didn’t). As it turned out, I just didn’t have the physical pieces needed. The sweetest and most knowledgeable maker, Paul Posner of Long Island’s LiTimeClocks, totally helped me to at least power both LED strips from the same Arduino Uno (ATmega328). Even this was a revelation to me. As a next step though, all that was necessary was to make four Y junctions with the four wires that are needed for each LED strip. Red, green, black, and blue – all matched up with their equal and then proceeding to the same connections for power and to the Arduino to make both work. I was impressed, grateful, and SAVED as double ‘weenies at Maker Faire New York made quite a splash. It was a close call — thanks to Paul!

I was determined to solve this LED strip problem and use my Arduino Yún (ATmega32U4) for Arduweenie and my Linino ONE for Linweenie. We had the instructions posted at Maker Faire as to how how to connect to these boards wirelessly. Yet, I admit that I was really nervous to get started. Luckily, I was beckoned to dog hunter’s headquarters in Boston (the dog house!) and had the opportunity to work one-on-one with our talented engineer, Adriano from Sicily. (Not only do I love your name — because it’s one of the words my spellcheck suggests when I’m trying to spell Arduino — but I appreciated it so much to have you show me how easygoing Wi-Fi really is!)

My plans to create a step-by-step progression for our Maker was becoming a reality. It turns out it all came down to a special number. 192.168.240.1. If you know that number, you’ve already got it figured out! Just type that into your web browser and give your board power for 1 minute and 10 seconds, and then you can configure the board on your wireless network and get back to Arduino IDE where you can still upload code wirelessly!

Adriano also started to show me the Linux side of Linino ONE using the Qualcomm Atheros AR9331 chip. I hope to learn more about Linux and how to use other programming languages on the Linino ONE, but for now, Arduino IDE is my best software tool. There is a bridge between AR9331 and the Atmel ATmega32U4, and I’m sure I’ll be glad the hardware was designed that way since using the Atmel side of the board is most comfortable for me.

The failures still seemed to present themselves as I tried to do in repetition what Adriano had taught me. I really believe that for making, the best way to learn how to do something is to do it over and over again. As I started configuring all my dog hunter hardware, I realized the 1 minute 10 second rule! You just need to give it that time twice in the process and then everything is great and working. It is a long time to wait, but do something that takes 1:10 like go to the kitchen and back, or see how many sit-ups you can do!

The final frontier was the power issues, and I didn’t solve it alone. Making is a team sport and though making alone in your apartment can be the most fun ever, it’s important to have some group time and some mentors available for consultation. First, my very good friend who is a maker and breaker at Apple helped me to do math… yes, MATH to find out what kind of power pack my LED strip needed. I had a different power pack for a different LED strip and he said, “Wait! That is not enough power and could damage your LED strip!” He pointed out that one LED strip I had purchased was just NeoPixels, or blocky RGB LEDs, whereas my official LPD8806 strip has chips in it, allowing each LED to be individually programmed. It was an “aha” moment. Buying stuff as a Maker can be hard too! Sometimes you buy the wrong thing, think you buy the right thing, buy the right thing but it breaks, etc.

Next, my good friend J.D. of Workshop Weekend — where we teach Arduino workshops to adults and private workshops in schools — agreed to help me. He also echoed much of what my maker-breaker friend had educated me about, and confirmed that the power pack I recently purchased should do the job. This time I got the right one! Based on the math!) J.D. also helped me do a basic internet search for some tips. He saw that for the Arduino Yun, instead of using the 5V power input, I should actually use the “vin” which is nearby and I had never considered or questioned what that pin was for. Beyond that, J.D. revealed if I did indeed use pins 11 and 13, as Andrew had originally taught me, that maybe the pattern would run faster.

One final revisit with my Maker-breaker friend found total success… and yet, is it really total success? Well, Arduweenie is working, but the patterns are waaaaaay too slow! So, now I’m left with a software issue, or maybe I still need more power. All in all, Arduweenie and Linweenie are totally, completely, absolutely worth it for the struggle because the rewards are great. I will achieve this new roadblock. I will consult with my brother Dakoder (okay, his name is Dakota, but he’s a coder!) because he helped me to write the code in Arduino IDE. And on my own time, alone in my apartment, I’ll certainly try to adjust the delays and anything to do with timing in the code. Also, I may have to try another power pack and see if that speeds up my blinking, rainbonic lights! Ohhh, I just found a library called FastLED…

This is the tell-all guide to #Arduweenie, a bewitching Maker project brought to you by Tenaya Hurst of Rogue Making and dog hunter LLC.

My project is a wire frame in the shape of a dachshund dog wrapped with a 5-meter long RGB LED strip which I program. That’s all he is, and yet, loved by so many children and Maker Faire attendees alike. It all started one cold rainy day…

I was teaching and facilitating a class with Workshop Weekend at Tech Liminal in Oakland, CA. We provide a weekend for Makers to consult with electrical engineers, software engineers, and teachers like me, to better understand electronics. One of our makers was leading a class in LED strips and I was immediately enthralled. We had a big five meter strip going down the middle of our long table and we saw all the demonstrations of the way we could change the patterns using Arduino IDE – a programming environment.

I couldn’t wait to show my students at Galileo’s Tech Summer Camps at the Tech Museum of Innovation. I teach three classes there – Circuits & Electronics, Wearable Tech, and Maker Studio. The problem I faced was how to display the LED strip to effectively show off the patterns, but also make the display portable. When I was a little kid, I played with Light Bright, so this would be a 3D programmable version! 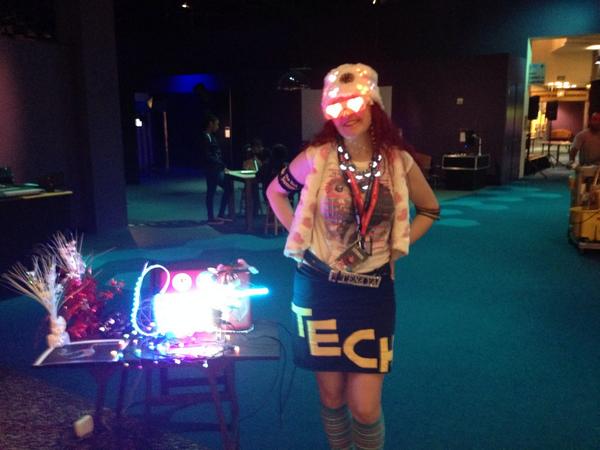 Also since I was a kid, I’ve loved dachshunds or wiener dogs. They’re simply the best. Sure, I have been sad that I can’t bring my dog, Woodchuck, to my various workshops. Obviously, I want to be focused on making and teaching, not my dog, but I still feel bad that he must be left at home. So that influenced the solution to my problem. I wanted something that would remind me of Woodchuck and some way to display my LED strip… the ideas were swirling!

At the same time, a friend of mine was designing his garden and started getting into topiary shapes. Also, I happen to just see the amazing documentary “A Man Named Pearl” about a very inspiring artist who happens to use trees and shrubs as his medium. Finally, I happened upon Etsy and found the answer – exactly what I needed!  A topiary shape of a dachshund, custom made by Gina Moll of Hollywood, Florida.

The RGB LED strip fits perfectly around the little dachshund allowing for fun rainbow patterns, color chasing functions, Cheshire cat swirls, and more. I tooled around with #Arduweenie for months and he made a few appearances in my classrooms. It wasn’t until an Open Make event at the Tech Museum of Innovation in April 2014, that #Arduweenie made the leap to true Twitter fame. A photo taken by Rebekah and tweeted by Prinda got the attention of Atmel’s VP of Marketing, Sander Arts. After all, nearly all Arduinos feature an Atmel chip, ranging from the ATmega32u4 to SAM3X8E. The #Arduweenie features an Arduino Uno (ATmega328).

Last April, I hosted The Tech Challenge, a large scale engineering challenge. Sander Arts was a special guest, but I didn’t get to meet him that day – as host I was on stage the entire event introducing the teams. It later all came together at Maker Faire San Mateo 2014 when my Linino.org exhibition booth was adjacent to the Atmel-Arduino installation. Sander was very kind and came to meet me in person with his team. I was so graciously included in three photos on Atmel’s blog about the Maker Faire – and #Arduweenie made it in two photos as well! 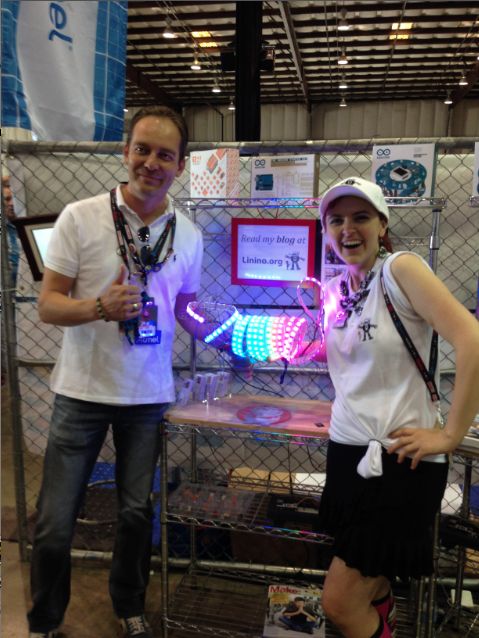 Since becoming famous, #Arduweenie has delighted students in my classrooms from San Jose to Oakland, Santa Rosa to San Francisco.

Side note: For those of you who may not know, we love making chippy puns to hit tunes from both yesterday and today. (Right, Sir Mix-A-Lot?) And, with her rendition of Katy Perry’s “Birthday,” Tenaya’s “Happy Making” doesn’t disappoint. Happy Maker Week, everyone!