Sequencers are an interesting type of electronic instrument, capable of playing a selectable beat over and over. These devices can take many forms, but the GRIDI (“Grid plus MIDI”) is likely one of the largest. It takes the form of a table with a 16 x 16 grid of lights embedded in it. Each of these lights, along with a sensor, are placed at the bottom of a small round recession on this table. When in operation, a line of these lights light up, travels in a set rhythm to the other side of the table, then reappears at the beginning to start the loop over again.

As entertaining as this is by itself, if a marker is placed in a dimple, then when the line of lights passes over it, the instrument signified by that position is played. As there are 16 positions that the line passes over, this allows for 16 virtual instruments to be sequenced at each line position.

The brainchild of musician Yuvi Gerstein, this contraption is inspired by Damien Hirst’s Spot Paintings, which can be seen on display behind the sequencer in the video below. Control is accomplished by an Arduino Mega (ATmega2560), along with a Macbook Pro. As you might suspect, although the build looks very clean, there is a lot of wiring behind the scenes that makes this electronic instrument work!

Intrigued? You can check out this article for even more information on this brilliant system.

Maker transforms his old game controller into a real MIDI drum set that can interface with digital audio workstations.

Back in 2008, it seemed like everyone was rocking out to Guitar Hero World Tour. And well, a lot has changed over the last seven years. Like many other Makers out there, Evan Kale wanted to retrofit somewhat out-dated gadgetry into a fully-functional, modern-day piece of musical equipment. In this case, he converted a secondhand Guitar Hero controller into a real world MIDI drum kit capable of interfacing with digital audio workstations like Ableton Live, FL Studio and Pro Tools. 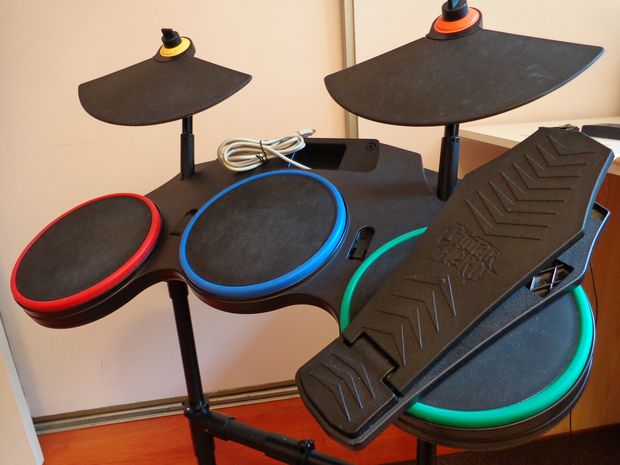 Not only is it cheaper than creating a set from scratch, it’s much easier as the game controllers are practically drum pads with piezo sensors already on the bottom. Kale employed the help of an Arduino Uno (ATmega328) given that he only needed six analog inputs; though, if more than six piezo sensors were required, the Maker suggests using an Arduino Mega (ATmega2560) with its 16 inputs.

Aside from the Arduino, the mod calls for a proto board, a 1MΩ resistor for every piezo sensor, male headers and a MIDI port with a 220Ω resistor. Fortunately for him, this particular controller already featured a MIDI input port. This was perfect, as he was able to save a MIDI jack and rewire it to transform it into MIDI output port.

For those unfamiliar with Guitar Hero World Tour, the device comes with three drum pads, two cymbals and base pedal. There’s even a pair of stereo 3.5mm audio jacks — one of which connects the base pedal, the other for further modifications.

To get started, Kale removed the back of the controller to access the piezos, which were plugged directly into the main board. However, this board was swapped out for the Arduino. The Maker went on to build a shield for the Arduino that would allow him to plug in the piezos to the pin headers on the proto board.

Beyond the main board, the controller includes an additional board on top tasked with holding the back panel, whose inputs are also directly plugged into the main board. According to Kale, “Since we’re reusing the MIDI port on the back panel of this controller, we’ll need to make a slight modification to the back panel board. By adding a jumper between the two pins pictured above, we can ground the middle pin of the MIDI port which would otherwise be missing for a MIDI output port. We can then plug the last four pins of the cable ribbon directly into our proto board.” 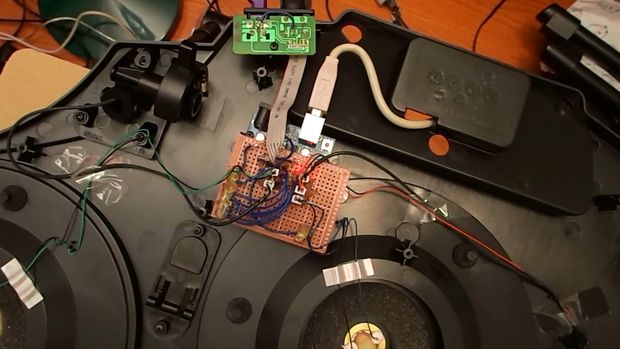 To devise the shield that would sit on top of the Arduino, Kale added some pin headers, took a few resistors and connected them to a common ground. From there, he broke the pin headers in half and soldered the ends of each onto the end of the resistors, and attached the other pins of the headers to the ground as well. This enabled the piezos to be plugged directly into the headers.

As for software, the Maker uploaded his custom MIDI Drum code to the Arduino. With his retrofitted Guitar Hero unit, the default program worked fine right out of the box, while for others, you’ll most likely need to make a few minor adjustments. Intrigued? You can watch the entire breakdown of the build in the video below, or head over to its Instructables page here. Rock on!