The newest version of the Adafruit GEMMA features an on/off switch and Micro-USB.

We’re not quite sure as to how we missed this bit of news on #WearableWednesday, however if DIY wearable projects are your thing, then perhaps you’d like know about the brand-spanking new Adafruit GEMMA v2.

The latest version — which is essentially identical to its predecessor in terms of aesthetics and code — has swapped out the Mini-B for a Mirco-B USB connector to provide some more on-board space. With all that new room, the GEMMA now is able to welcome the addition of an on/off switch.

For the 1% of you who are not familiar with Adafruit and its versatile lineup of Atmel based body boards, GEMMA is a tiny wearable MCU that packs a whole lot of awesome in a 1-inch (27mm) diameter area. The mini yet powerful platform is powered by an ATtiny85 and is programmable with the Arduino IDE via USB. It also features a 3.3V regulator with 150mA output capability and ultra-low dropout. Beyond that, v2’s ATtiny85 chip package has switched from SOIC to QFN.

“We designed a USB bootloader so you can plug it into any computer and reprogram it over a USB port just like an Arduino (it uses 2 of the 5 I/O pins, leaving you with 3). In fact, we even made some simple modifications to the Arduino IDE so that it works like a mini-FLORA,” the Adafruit team explains.

Ideal for small and simple projects sewn with conductive thread, the [tinyAVR based] GEMMA fits the needs of nearly every entry-level wearable creation — ranging from reading sensors to driving addressable LED pixels.

“We wanted to design a microcontroller board that was small enough to fit into any project, and low cost enough to use without hesitation. Perfect for when you don’t want to give up your Flora and you aren’t willing to take apart the project you worked so hard to design. It’s our lowest-cost sewable controller.”

Aside from the ATtiny85 MCU, other key hardware specs of GEMMA include:

Interested in learning more? Head over to its official page here. Or, watch Adafruit’s Becky Stern show off the new and improved GEMMA v2 below!

The Tinusaur — powered by an ATtiny85 MCU — is a simple, inexpensive and quick-start platform targeted at both Makers and developers alike.

“The Tinusaur is a minimal microcontroller hardware configuration based on Atmel’s AVR ATtiny family of products, and more specifically, those with DIP-8 case such as ATtiny25/ATtiny45/ATtiny85, ATtiny13 as well as their variations,” project creator Neven Boyanov explained in a recent Hackster.io post.

Aside from the ATtiny85, additional key platform specs include:

“All the components are easy to find, and of course, cheap. Only the minimum required components should be part of the circuit.”

In addition, the two-row headers H1 and H2 can be used as a breadboard, or to facilitate the placement of a shield. Tinusaur also includes an optional mount for a button cell battery on the bottom and a jumper to toggle the unit on or off.

On the software side, the board offers cross-platform support, as well as compatibility with the official Arduino IDE.

According to Boyanov, the goal of the Tinusaur project is to offer a simple, cheap and accessible quick-start platform for everyone interested in learning and making things. Sound like you? You can check out the project’s official page and its Hackster.io post here.

A 15-year-old Maker by the name of Angelo has designed a homebrew pulse monitor using an Atmel based Arduino board, a grippy clothes hanger, clear/bright red LED and a light dependent resistor (LDR).

The project — which can be found on Instructables — was inspired by MAKE Magazine’s homemade pulse monitor.

“Movies look cool with those EKG (electrocardiogram), the one that beeps and detects heart activities. A few months ago, we had to shoot a hospital scene for our school project. We needed an EKG instrument,” Angelo explains.

“To keep the movie authentic, we didn’t want to fake the readings so we made the next best thing, a pulse monitor. This project works and can actually monitor your pulse. [However], due to the lack of research and experimentation, the homebrew pulse monitor cannot be used for medical purposes.”

Have a friend or foe who continuously tells fibs? Good news! According to Angelo, the homebrew device can even be used as a rudimentary lie detector.

“When a person lies, you’ll notice a sudden change on the [pulse] graph,” he said.

On the software side, Angelo employs Processing 2 for graphing, along with a specially coded Arduino IDE sketch. Both are required to run the homebrew project.

According to Maker Derek Kuschel, there is a massive pool of hidden data flowing around within a car’s computer units. In an effort to display this data, Derek recently launched a successful Kickstarter campaign for a device that taps into these binary riches. If you’re someone who enjoys tinkering with their vehicle, you’ll certainly be interested in his new car hacking platform, the CANBus Triple. 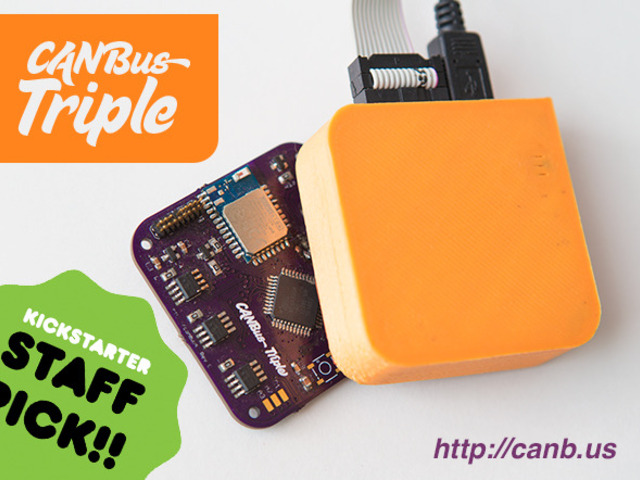 CANBus Triple has been developed in hopes of providing an Arduino-style device for cars that can be used to bus data and add awesome functionality to your vehicle.

The Controller Area Network (CAN) is a message-based protocol found in modern automobiles, which carries significant amounts of data all around your vehicle while you drive, with much of it being unavailable to the average driver. In fcat, . Atmel offers a wide range of solutions for CAN networking, including AVR 8-bit RISC microcontrollers and transceivers.

However, it didn’t sit well with Derek that this much data was going to waste; therefore, through a series of three prototypes, he finally developed a system to display this sought after automobile information.

“The CAN Bus Triple gives you an easy way to read and write raw CAN data packets, and perform operations with that data easily,” the Maker elaborates. Using an Atmel ATmega32u4 MCU, the device can read and analyze numerous data sets that are traditionally hidden within the vehicle’s inner workings. 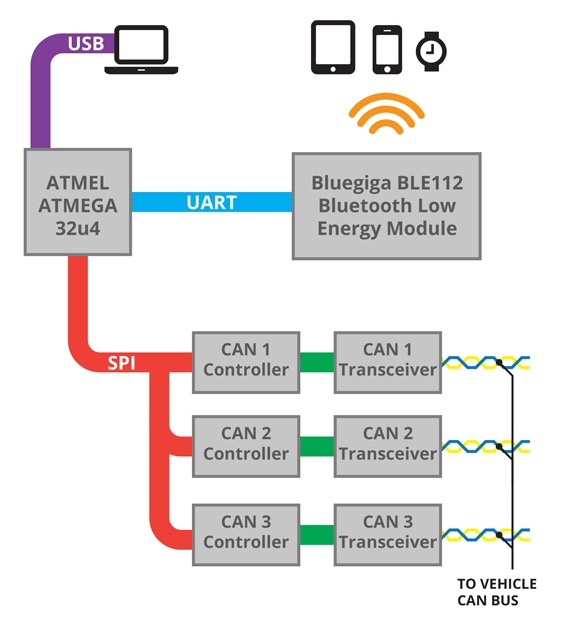 You can use the CANBus Triple to simply watch all the data on your CAN Bus, or send your own packets out to the network. “Simply attaching the two CAN High and Low lines it’s all you need to send and receive raw CAN data packets,” its Kickstarter page explains. “The real fun comes in when you physically cut the CAN Bus and use the CANBus Triple to read and augment the packets. Each packet is read and processed, then optionally sent back out and your car doesn’t know the difference.”

As Derek points out, using this method, one can listen for all of the hidden data on the bus and send it over Bluteooth LE, or even send out your own packets to an in-dash OEM display as shown below on a Mazdaspeed3.

Given the open-source nature of his project, Derek has provided fellow Makers with the coding and schematics needed to produce their own software for the CAN Bus Triple platform as he envisions his project as “a toolkit for adding to and augmenting your vehicle.”

Both the ATmega program and Bluetooth firmware are flashable without any additional hardware, the Maker explains. “You can add functionality to the Bluetooth module and upload the firmware over USB!” Now, add in the fact that the Triple is compatible with the Arduino IDE and can run on multiple mobile platforms, and any mechanic Maker should be ready to rev their engines!

Derek is currently beta testing his machine in a variety of cars. He has used the device in his Mazdaspeed 3 for over two years without a single issue. Next up will be large-scale production, and shortly thereafter hopefully customer distribution by the end of the year.

The open-source car hacking platform garnered just shy of $68,000 in pledges, tripling its original goal of $18,000. For more information about Derek’s project or how you could obtain your own unit, head over to his Kickstarter page.

A Maker named Ugifer recently sent a box of electronics attached to a balloon approximately 124,000 into the air.

As Alan Parekh of Hacked Gadgets reports, the balloon was tracked using the Space Near Us system, with Ugifer creating a custom PCB to keep the circuit as robust and compact as possible.

“[Atmel’s] ATMega328 MCU is a great option because it can be programmed from the very easy Arduino IDE,” Ugifer explained.

“It will also run on 3v3 but only a 8MHz. However that’s plenty of processing power for reading a GPS and running a low baud-rate radio.”

Interested in learning more? You can check out the project’s official Instructables page here and the HackedGadgets write up here.

RedBearLab has launched the Blend Micro, a mini development board targeted at the Internet of Things (IoT). Powered by Atmel’s popular ATmega32u4 microcontroller (MCU), the board is also equipped with a Bluetooth 4.0 Smart Energy chip.

So, how does the board work?   According to the RedBearLab crew, the nRF8001 chip communicates with Atmel’s Atmega32u4 MCU via the ACI (Application Controller Interface). Although the ACI is similar to SPI, it does not actually function as SPI. Indeed, SPI consists of MOSI, MISO, SCK and SS, whereas ACI includes MOSI, MISO, SCK, REQN and RDYN.

“Since the nRF8001 chip may receive data anytime (even when not selected by SPI master) the SS line is not needed. For the ACI, data exchange [is routed] through MOSI and MISO, [while] SCK provides the clock generated by master,” a RedBearLab rep explained.

“When the master wants to request data from BLE Shield, it [shifts] the REQN to low until RDYN line is put to low by BLE Shield. The master then generates the clock to read out the data. After reading out the data, master will release the REQN and BLE Shield release the RDYN, putting them to high.”

The Blend Micro runs at 3.3V to reduce level shifting, since the nRF8001 chip only accepts 3.3V. As such, the onboard LDO converts 5V from the USB power source into 3.3V for the board.

“Normally, you should set Blend Micro to run at 8 MHz/3.3V. However, if you want to run faster and not concern about the reliability (we do not see any issue so far), you can run it as 16 MHz [for a] so-called ‘overclock,’ the rep added.

Interested in learning more? You can check out Blend Micro’s official page here.

The Papilio DUO – which recently made its Kickstarter debut – is equipped with both an FPGA and Atmel’s ATmega32U4 microcontroller (MCU).

According to Papilio rep Jack Gassett, the board allows Makers and devs to easily draw circuits, move pins, connect extra serial ports and even link a Bitcoin miner to the ATmega32U4. 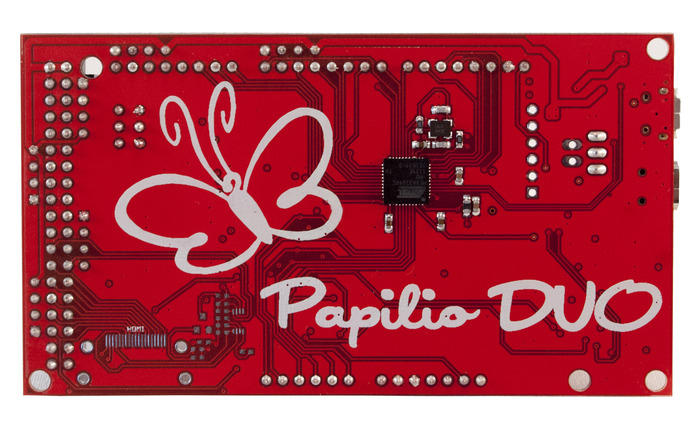 “The Papilio DUO is much more than just a hardware project. In fact, the software is the secret sauce that sets the DUO apart from other FPGA boards. It lets you draw up circuits without investing time and energy in learning VHDL/Verilog,” Gassett explained.

“We start with the Arduino IDE (Integrated Development Environment) and supercharge it by adding circuits into the mix. We bring all of the pieces needed to draw and debug your very own circuits in one place. It’s an easy and seamless user experience that we call Papilio DesignLab for use with both Windows and Linux.”

Aside from Atmel’s ATmega32U4 microcontroller, key hardware specs include: