The Tempescope is an ambient display that can visualize various weather conditions inside a box.

In today’s tech-savvy world, sure you could always download a weather app or turn on the news to check the latest conditions, but what fun is that? Instead, Ken Kawamoto has developed an ambient physical display that can actually visualize the forecast right from the comfort of your living room, reminding you to never forget an umbrella as you head off to work. Initially released three years ago as an open source project, the Maker and his team have since decided to launch a crowdfunding campaign following an overwhelming interest in their design.

While most home weather displays boast an LED screen or other methods of revealing what’s going on outside your front door, Tempescope literally recreates the forecast from your bookshelf, coffee table, desk or wherever else. Described as like “having a window that lets you look at tomorrow’s sky,” the active gadget is powered by an ATmega328 and equipped with a water pump, an ultrasound mist diffuser and a series of LED lights, all concealed inside a clear acrylic box.

With an AVR chip as its brains, the microcosm in a box interfaces with a PC either through USB or over Bluetooth. Currently, there are three modes of operation: one that animates the next day’s forecast, one that replicates the current weather of any location and shares it with loved ones throughout the globe, as well as another that lets you manually define an animation sequence to play.

Once it is synced up, a simple software program is tasked with retrieving the necessary data from the web which it uses to reproduce real raindrops and clouds, simulate thunderstorms and lightning, as well as emit radiant sunshine. The LEDs change from red to blue to reflect things such as sunrise/sunset and storms, whereas the diffuser will fill the box with mist to match the level of cloud cover outside. For example, if it happens to be raining, the pump will pull water from the lower reservoir and drip it down from the Tempescope’s ceiling, while its embedded lights will emit a purplish hue.

What’s more, you can employ its accompanying app to operate three preset modes or use its SDK to create your own custom program. Meaning, you can set the weather to fit your mood because, after all, everyone loves reading on a rainy day. Want this ambient unit for your household? Head over to its Indiegogo campaign, where Kawamoto is currently seeking $398,000. The first batch of Tempescopes will ship in April 2016 — just in time for those spring showers!

This doorway accessory lights up depending on the weather, helping you know when to use your umbrella.

Have you ever been in such a rush on the way out to work that you forgot to grab an umbrella? And then, just to make matters worse, the sky opens up as you walk the city sidewalks. There, you’re left soaking wet in the middle of a downpour with no cover in sight. Well, thanks to this ambient umbrella stand, that won’t happen again.

Integrating the power of real-time data and connectivity into everyday objects has become a big trend in product development, more than ever before with the emergence of the Internet of Things — as demonstrated by one team of Makers’ recent project as part of a Penn Product Design class. Nimbus is a fully-functional stand that not only serves as home to your umbrellas, but can pull weather information via Wi-Fi and inform you of the day’s weather as well.

The stand is comprised of several RGB LEDs, a Wi-Fi module, an IR sensor and an Atmel based Arduino, all enclosed in waterproof housing. Nimbus boasts a dual-shell structure, in that all electrical components are kept clear from any wet umbrellas inside the inner case. While the inner case can easily be removed for cleaning, the outer shell can be stands a tad off the ground to allow for airflow through its holes. This enables the umbrella to dry much more efficiently.

Nimbus uses different light motion to interpret future weather. When its embedded IR sensor detects a user approaching, colored LEDs mounted in between the pair of shells are powered, changing in color and hue. The case’s surfaces emits various patterns and sounds indicating how much and for how long it will rain, based on real-time data acquired from its wireless connection. Otherwise, the umbrella stand will remain on standby and update weather information without interruption.

Inspired to add some enchantment to another everyday object? Submit yours to element14 for a chance to win a trip to World Maker Faire 2015. In the meantime, you may also want to check out this ambient weather display or this lamp that alters color based on the weather.

Communicate with anyone anywhere in the world without picking up the phone.

Design Academy Eindhoven graduate Penny Webb has developed a series of home accessories that can change colors when subjected to various stimuli, even if they occur many miles away. The items in what the Maker calls the Separate Togetherness collection are designed to peripherally interact with each other, enabling people anywhere in the world to engage without necessarily having to communicate directly. “Separate Togetherness is the result of my research into augmented digital environments and ubiquitous computing. Intentionally or not, advancements in digital technology have catered for a very natural, psychological human need; togetherness,” Webb explains.

Each accessory is made using a combination of smart materials that respond by slowly and subtly adjusting in appearance to converse remote presence. The ambient objects, which share a similar shade palette and embody a circular shape, are paired with a corresponding sensor embedded inside another small object in a separate location and connected via Wi-Fi.

How it works is relatively simple. When someone stimulates the sensor by breathing, stroking or moving past it, its companion product reacts by altering its hue, thereby reminding the user of a special someone. The set consists of a hanging lamp, a curtain and a mirror. 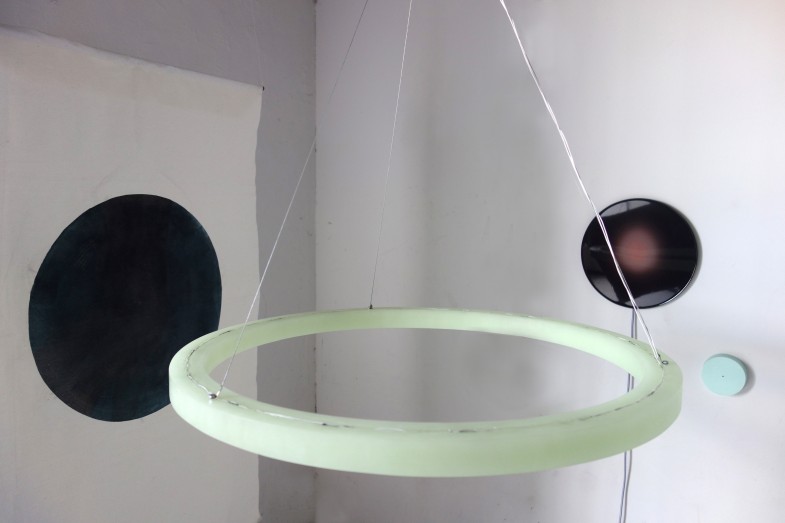 The lamp — which is made of phosphorescent pigment, polyester resin and small UV LEDs — glows in response to distant changes in lighting that are detected by embedded light sensors and a wireless Atmel based Arduino unit. Secondly, the curtain can reveal layers of colors in response to a distant touchpad consisting of piezo elements, detecting pressure when stroked. Finally, the mirror — comprised of thermochromic pigment and epoxy resin — fluctuates its tint in response to a distant breath. 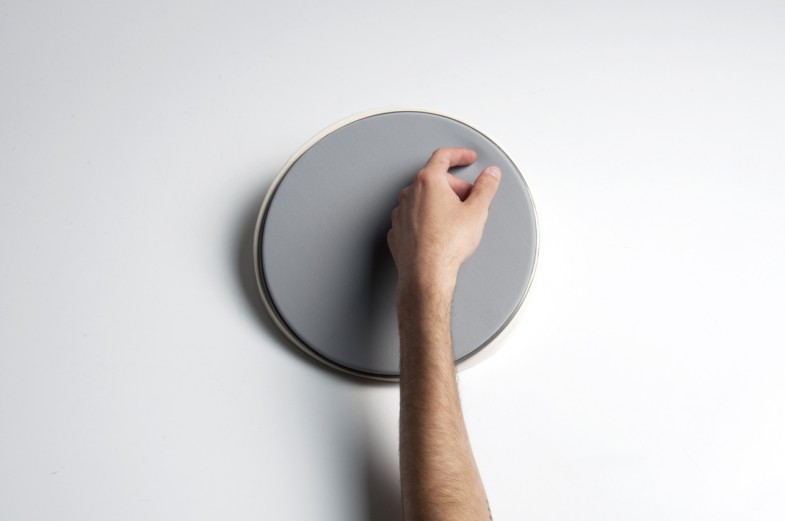 “On its own, the Internet is a relatively lonely place void of human contact. The products each interact, and aim to engage your peripheral awareness as an alternative means of attaining distant closeness,” Webb adds.

Interested in learning more? Head over to the project’s official page here. Meanwhile, you may also want to check out how one Israeli design student developed a similar trilogy of creations that can transmit silent gestures between loved ones.