Local Motors has introduced what will become the first drivable, 3D-printed car you can buy: the LM3D Swim.

Earlier this year, the Phoenix-based company held a contest that encouraged people to come up with designs for the first road-ready 3D-printed car. Auto enthusiast Kevin Lo was the brainchild of the winning submission, LM3D, which had been selected among 200 other entries.

Local Motors opened the eyes of the automotive industry when it stole the SEMA spotlight back in 2014 by live-printing the world’s first 3D-printed car. Carrying that momentum, the team has now entered the intensive testing and development phases that will culminate with a highway-ready, fully-homologated series of cars built using direct digital manufacturing, of which 3D printing will play an integral role.

Roughly 75% of the LM3D will be printed, including the body panels and chassis. However, Local Motors is hoping to consolidate as much of the traditional bill of materials into a single, 3D-printed piece as possible, eventually making about 90% of the car using 3D printing. Making it even more impressive, migrating from design to prototype was accomplished at unprecedented speed. The process took just over two months, start to finish.

“In the past few months our engineers have moved from only a rendering to the car you see in front of you today,” Local Motors CEO Jay Rogers told the crowd at SEMA. “We are using the power of DDM to create new vehicles at a pace unparalleled in the auto industry, and we’re thrilled to begin taking orders on 3D-printed cars next year.”

Software from Siemens enabled the Local Motors team to move quickly from concept to car with the simplicity of direct modeling and flexibility of synchronous technology. Meanwhile, materials used to build the body of LM3D Swim came from thermoplastic material solutions provider SABIC.

Cutting-edge technology will be integrated into all models in the LM3D series. Local Motors recently partnered with IBM to create interactions between the microfactory, 3D-printed vehicles, their drivers and the outside environment in ways never achieved before. These technologies will result in increased safety and efficiency in traffic. Local Motors also plans to utilize several leading IoT companies to develop and launch a series of apps and vehicle products to connect, monitor and optimize the driving experience.

Want a 3D-printed vehicle of your own? You won’t have to wait too long. Local Motors plans to release several new models in the LM3D series throughout 2016 while it conducts federal crash testing and receives the necessary highway certifications. Those wishing to buy one will have to be ready to shell out roughly $53,000. The first batch of vehicles won’t be delivered, though, until 2017.

3D printing is allowing carmakers to go from concept to completion in just days.

According to latest reports, the use of 3D printing in the auto industry is expected to quintuple over the next five years to a value north of $1.25 billion, up from just $267 million today. This comes after history was made last year when the world’s first 3D-printed car drove out of Chicago’s McCormick Place during the 2014 International Manufacturing Technology Show. Well, the Local Motors crew is back at it again, this time 3D printing the main structure of a car right on the 2015 North American International Auto Show floor. 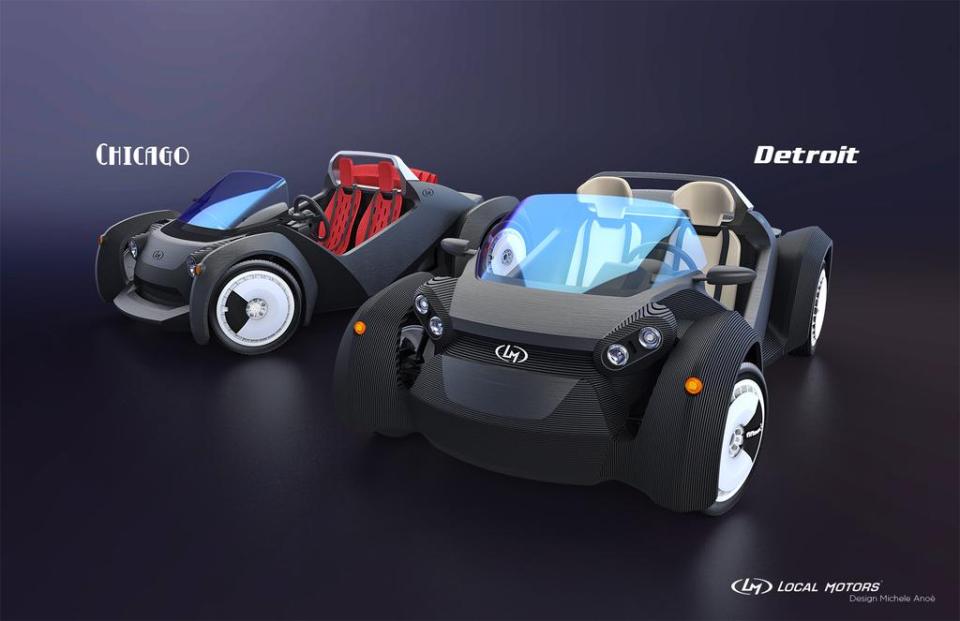 The Strati is first-ever 3D-printed vehicle and is a refinement of a design created by Michele Anoè, who submitted the concept as part of an online co-creation community project. The initial Strati models began printing today in Detroit in an example of what the company dubs a micro-factory, a lab that is typically located within 100 miles of major urban centers, creates more than 100 local jobs, reduces freight and distribution costs by 97%, increases recycling and reduces waste while speeding delivery time to market. The first two will be opened in Knoxville, Tennessee and Washington, D.C.

“Gone are the days of an economy of scale in order to introduce and commercialize a technology,” explained Local Motors CEO John B. Rogers, Jr. “Micro-factories are a great counterpoint because they employ an economy of scope by taking advantage of low cost tooling and co-creation, resulting in the ability to get products to market faster and in less time while using less capital to find a winning concept.”

Throughout the two-weeklong event, Local Motors showed off its proprietary manufacturing process for 3D-printing cars, which consists of three phases: additive, subtractive and rapid assembly. Made from ABS plastic reinforced with carbon fiber provide by SABIC, the current model of the Strati takes approximately 44 hours to print 212 layers. And while it won’t hit Formula 1-like speeds anytime soon, the two-seater can reach 25 miles per hour. 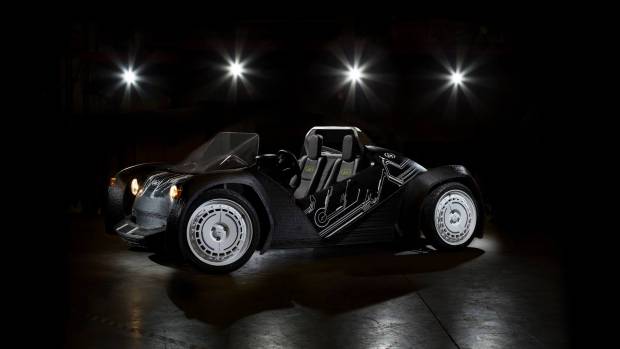 While the company may not be ready to talk definite price just yet (which will most likely sell for $18,000 to $30,000), it does want to shorten the production process from just under two days to a day. CEO Jay Rogers notes that the Strati is first of three vehicles Local Motors plans to sell, with the current model launching this year. 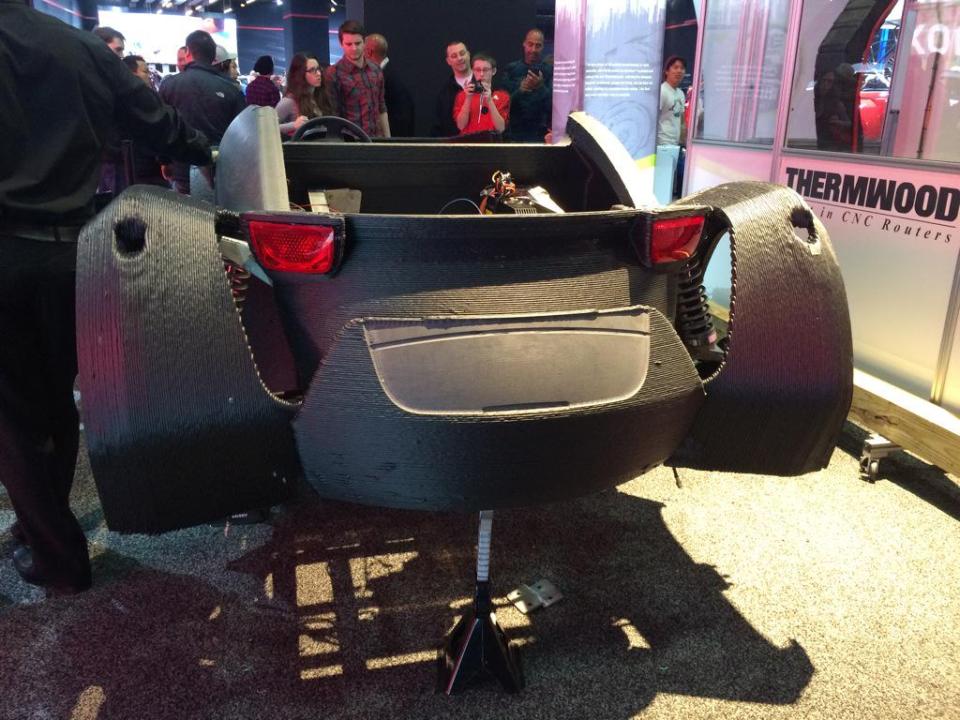 However, as impressive as they may be, the first batch of printed cars will be categorized more like golf carts as “neighborhood electric vehicles.” Yet, the company does intend on offering a ride that can be driven on all roads in the U.S over the next two years. This, of course, will first require passing safety requirements set by the National Highway Traffic Safety Administration, including crash tests.

Strati isn’t the only 3D-printed vehicle shining in the NAIAS spotlight, as the Department of Energy’s Oak Ridge National Laboratory (ORNL) has also debuted a fully-functional 3D-printed Shelby Cobra. The car, which honors the 50th anniversary of the Shelby Cobra 289 FIA, weighs 1,400 pounds, with nearly a third of the parts used on the vehicle having been printed in just 24 hours.

“You can print out a working vehicle in a matter of days or weeks,” explained Lonnie Love, ORNL Senior Research Scientist. “You can test it for form, fit and function. Your ability to innovate quickly has radically changed. There’s a whole industry that could be built up around rapid innovation in transportation.”

Earlier this month, the crew over at Local Motors made history by successfully building (and driving) the world’s first 3D-printed car all within a 44-hour window at the International Manufacturing Technology Show. The highly-popular vehicle even made its way to the World Maker Faire, where AVR Man himself had the chance to scope out the new set of wheels.

The technology behind the Strati was pioneered at the Department of Energy’s Oak Ridge National Laboratory (ORNL). The vehicle was produced all in one piece using direct digital manufacturing (DDM); however, the mechanical components such as batteries, motor and wiring were still needed from third party sources.

In total, it took 44 hours to print the drivable project’s 49 parts from the massive 3D printer. During the IMT show, the Local Motors team assembled the printed pieces, dropped in the engine and bolted on wheels, tires, seats, windshield, and interior. (For those wondering, your average car consists of anywhere between 5,000 to 6,000 parts.)

Local Motors is hoping the Strati will continue to demonstrate the viability of using sustainable, digital manufacturing solutions in the automotive industry, and plans to launch production-level 3D-printed cars that will be available to the general public for purchase in the forthcoming months.

Until then, the company has unveiled the next best thing. In true open source fashion, Local Motors has released the downloadable file so that any Maker can now print an accurate 1:10 scale model of the Strati in the comfort of their own home — wheels, steering shaft, suspension, pedal box and all.

Local Motors has requested that those who 3D print the miniature Strati model share an image of the final product with them.