A team of researchers from UC Berkeley’s College of Environmental Design has unveiled what they’re calling the “first and largest powdered cement-based, 3D-printed structure.”

To be clear, this isn’t the first 3D-printed building. If you recall, a Chinese company recently constructed 10 homes in less than day and finished an entire apartment block back in January using 3D-printed parts. Aside from that, a Dutch design firm has already devised a canal house in Amsterdam, a New York architect planned an entire estate and a Minnesota Maker created a castle all through additive manufacturing. However, what sets this project apart is that it was constructed using dry powdered cement, whereas its predecessors were made by extruding wet cement through a nozzle.

The pavilion, which goes by the name Bloom, is 9′ tall, 12′ wide and 12′ deep, and dons a traditional Thai floral motif design on its exterior to allow for natural light to shine through its interior in daylight and glow like a luminary at night. It is composed of 840 custom-printed blocks, each comprised of an iron oxide-free Portland cement polymer, and fabricated using 11 3D Systems printers. 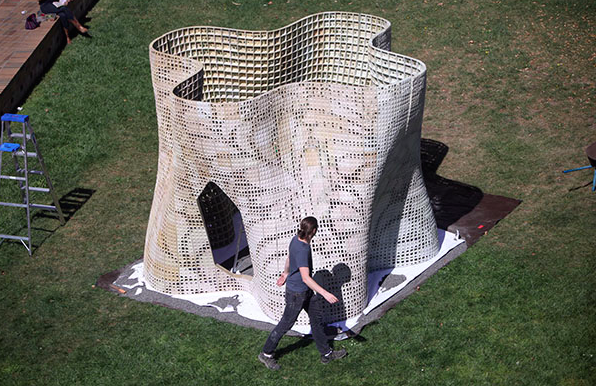 “This project is the genesis of a realistic, marketable process with the potential to transform the way we think about building a structure,” explained Ronald Rael, Associate Professor of Architecture at UC Berkeley.

What really sets this unique system apart from existing methods of extrusion is that, by using an iron oxide-free Portland cement polymer formulation, Bloom is able to overcome many of the previous limitations to 3D-printed architecture. These constraints include the speed and cost of production, as well as aesthetics and practical applications.

Undoubtedly, 3D printing has transcended well beyond just mere plastic figurines, with today’s advanced printers — many of which powered by Atmel | SMART and AVR microcontrollers — capable of producing everything from functional tools in space to automobiles to entire buildings. After its official unveiling, the Bloom Pavilion was disassembled and shipped to Siam Research and Innovation in Thailand, where it will be exhibited for a few months before touring the world. Those wishing to learn more can head over to the project’s official page here.