Fabulous Beasts is a game of strategy and balance in which you build a tower of animals on your tabletop, then help them evolve in a connected digital world.

Video games have come a long way in the past several years, yet they’ve also increased children’s fascination with screened devices. And unfortunately, alternatives like board and card games seem to lack the high-tech pizzazz kids are looking for these days. This was a problem London-based studio Sensible Object wanted to solve.

Fabulous Beasts is the startup’s first game, which combines the physical interaction of old-school fun with today’s digital savviness. Inspired by the Internet of Things, players take turns in constructing a Jenga-like tower by balancing multi-colored, animal-shaped blocks on top of each other.

Similar to popular games like Disney Infinity and Skylanders, Fabulous Beasts is hoping to bridge the gap between the physical and virtual worlds, all while creating a deeper and more dynamic experience for the younger generation.

The game itself is made for one to five players, each of whom become “gods” ruling over an app-connected world, visible on any phone or tablet over Bluetooth. Before each turn, players scan their RFID-embedded game pieces, also known as “Beast Artefacts,” via a reader and then place them atop the stack. As this happens, the animals will appear on the mobile device, and evolve and augment in interesting ways.

As time goes on, the tower becomes taller and more complex, and consequently worth more points. The objective is get the highest score (or fabulousness) before the tower eventually falls down. Once this occurs, just like Jenga, the game comes to an end.

What’s more, Fabulous Beasts is a fine example of a project that has transcended from beyond the MakerSpace and into the MarketPlace, having originally prototyped with 3D printing and Arduino. The studio is now launching a crowdfunding campaign to draw attention from the public.

Sound like a game for you and your children? Head over to its Kickstarter campaign, where the Sensible Object crew is currently seeking $214,582. Delivery is expected to get underway in November 2016.

SmartyPans is a Bluetooth-enabled skillet that calculates nutrition information of home cooked meals, in real-time.

Are you the type of person who dines out every night because you don’t know how to cook or agonizes about the nutritional contents of your food with every bite? If so, those worries may be a thing of the past thanks to SmartyPans — an intelligent frying pan, which not only helps you whip up a meal but keeps tabs on what you consume as well.

SmartyPans enables anyone to make dinner like a chef, while tracking their intake like a pro. The cooking system is comprised of two parts: the connected skillet and an accompanying recipe app. It uses the combination of voice commands, weight and temperature sensors along with the app to provide you with real-time nutritional information about the food you’re preparing.

To get started, you tell the app what ingredients you’re adding to the pan. The app then employs those commands and its sensors to calculate calories and other nutritional data. What’s more, you can input those numbers into some of today’s most popular health and fitness platforms, like MyFitnessPal, Google Fit and Fitbit, as well as share your favorite recipes with friends and family.

In terms of electronics, SmartyPans features an Atmel | SMART Cortex-M4 MCU at its core, Bluetooth Low Energy connectivity and a rechargeable 800mAh battery. The pan itself boasts a unique design with an NSF-grade aluminum outer layer and a detachable inner cooking surface. This modularity allows you to use the top portion as a serving bowl and oven pan, or the entire thing as a kitchen scale.

Are you ready to cook with freedom and track with ease? Head over to SmartyPans’ Indiegogo campaign, where the brother-sister duo of Prachi and Rahul Baxi are currently seeking $40,000. The must-have accessory will come in red, black and orange along with the option of stainless steel or a ceramic non-stick coating. Delivery is slated for August 2016.

NUA Robotics’ new suitcase features a camera sensor that can detect where you are, and travel alongside you while on flat surfaces.

Good news frequent travelers, you may soon be able to navigate the airport with a piece of robotic luggage. This, of course, will allow you to free your hands to make calls, respond to emails, grab a quick bite to eat or whatever else you do during a layover. Not to mention, this can certainly come in handy for those in wheelchairs or on crutches. 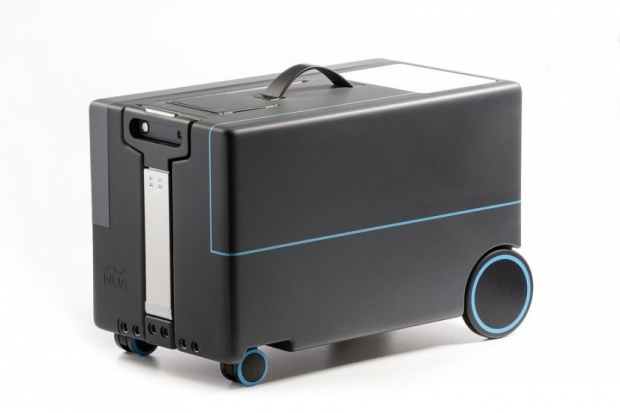 Designed by NUA Robotics, the autonomous suitcase (whose prototype was on display back at CES 2016) is equipped with powered wheels, a camera sensor to avoid bumping into others and Bluetooth technology, which enables it to move alongside its user once activated by its accompanying mobile app.

A built-in rechargeable battery lasts anywhere between 60 to 90 minutes, which is plenty for rushing around the airport or heading to your car in the parking garage. But what happens when it dies? Despair not! Simply pop out the handle and pull it yourself, as if it were any ordinary ‘dumb’ bag. Or, if you have time to refuel, just plug it into an outlet. The suitcase can even be used to juice up any of your mobile devices via USB, and boasts an anti-theft alarm to prevent any envious onlookers from stealing it.

At the moment, the robotic luggage can achieve speeds of up to 3 mph, but that may be enhanced in the coming months. While it is not commercially available yet, you can see it in action below!

Thanks to Ruggie, you no longer have to lose to the snooze.

If you’re not a morning person, the task of waking up probably consists of multiple alarms going off, followed by several snooze buttons. By the time you actually do get up, you’ve realized you overslept and have to rush to work feeling groggy and tired. Not a great way to start the day right? Fortunately, there’s a new and better way to wake up and get out of bed early. 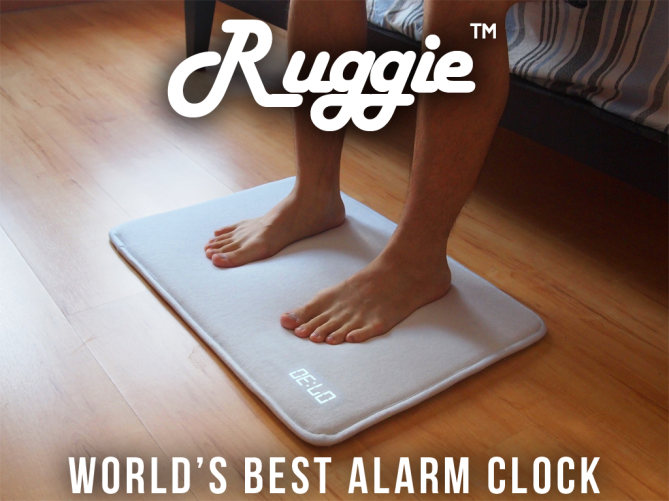 Meet Ruggie, a memory foam rug and alarm clock that needs to sense pressure for at least three seconds before shutting off, making it the ultimate snooze proof alarm. Founder Winsom Tam rethought the design of traditional alarm clocks when he, like millions of other people, struggled with waking up. The team touts that Ruggie will help you get out of bed easily, feeling more optimistic and more productive.

The problem with snooze buttons on today’s alarm clocks is that we inevitably fall back into bed. Ruggie eliminates that possibility because it requires that you stand on the rug to stop the alarm. By then, you’ve already gotten over hard part — getting out of bed. You can also choose how you want to start you day. If you’re annoyed by the blaring beeping noise of older alarm clocks, Ruggie can play any custom sound you want by connecting it to your computer via USB and dragging in the sound files. This opens the possibility of waking up to positive affirmations, goal reminders or your favorite song. Or you can choose the Ruggie’s presets of soothing alarms.

Ruggie has a minimalistic design measuring at 15.5″ by 23.5″, suitable for any room. Its bright LED display doubles as a night light and its touch sensor is what makes sure you’ve gotten out bed. If you want to know the time, just tap the rug. Ruggie can be cleaned in the washer but first you must take out the electronics inside.

Ready to be the early bird that gets the worm? Head over to Ruggie’s Kicksstarter page, where Tam and the team have already well surpassed their initial goal of $36,113, with more than 1,000 backers to date. If all goes pending to plan, delivery is slated for September 2016.

Installing a car seat? There’s an app for that!

Being a parent is tough enough, and keeping your children safe at all times is even tougher. With hopes of giving moms and dads everywhere one less thing to worry about, Pittsburgh-based startup 4moms has introduced a Self-Installing Car Seat. 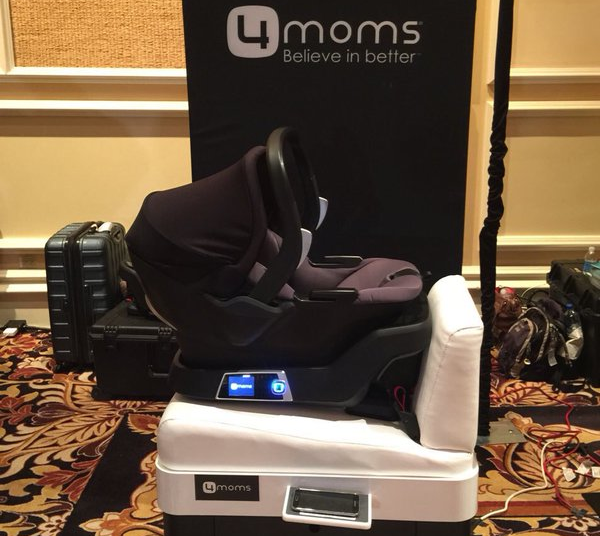 The seat — which was on display at CES 2016 — aims to take some of the guesswork out of the often-frustrating installation. This is a pretty big deal, too, when you consider that four in five seats are improperly lodged inside cars. Making matters worse, there has never really been an easy to way to check.

The unit is designed for infants from four to 30 pounds, and employs a robot in the base of the seat for proper installation every time. Once the parent connects the carrier to the vehicle’s LATCH anchors, the base automatically levels, tightens the straps and then provides verification that it safe for child use. From there, it triggers a continuous monitoring system that will notify parents if anything is amiss, like a disconnected LATCH or loss of tension, as well as provide guidance on how to correct via a display on its side.

Although the seat works without its accompanying app, a smartphone will help streamline the process. By reading a vehicle’s identification number (VIN), the app can recommend the best position for the seat and where to find the LATCH anchors based on make and model of the car. It also enables the parent to ensure the car seat base is installed at the right level, even if parked on an incline.

To accomplish this, the Self-Installing Car Seat uses the phone’s internal accelerometer and gyroscope to calculate the incline. The app relays this information to the base, which then compensates for this measured slope when auto-leveling. As the 4moms crew explains, most of today’s premium car seats only have a gravity ball within the base, which require the parent to move their vehicle to level ground for a correct installation.

Additionally, the app utilizes the seat’s sensors to check on the baby’s growth in order to alert parents when the child is becoming too big for the carrier.

Sound like a must-have item for you and your young one? The $499 accessory will be available in June. Until then, you can check out their website here.