Kids can now draw their own 3D creations in thin air.

With aspirations of bring 3D printing to the everyday consumer, the WobbleWorks team launched a successful Kickstarter campaign to help fund its 3Doodler 3D printing pen back in 2013. This handheld device lets Makers draw in mid-air or on most surfaces, heating and solidifying plastic material so that the thing being drawn is able to come to life as an actual object.

And after upgrading its pen in 2015, which yet again garnered more than $1.5 million on Kickstarter, the Boston-based startup has returned with a child-friendly version of its popular drawing tool, which will enable those ages 8 to 13 to explore their creativity beyond using just crayons and paper. Instead, the 3Doodler Start will allow children to design their own figurines, art, jewelry and pretty much any other 3D model that comes to mind. This should come as great news to parents, because let’s face it, the sight of a discarded toys is all too common these days.

“3Doodler Start inspires creativity, design, building and spatial understanding, opening up 3D creation to a whole new generation. This is not a fad toy; we believe that, like LEGO and now Minecraft, the 3Doodler Start will become part of every kid’s upbringing,” company co-founder Daniel Cowen explains.

The most notable thing about the 3Doodler Start, however, is that has no hot parts, and uses an environmentally-friendly filament that melts with barely any heat. Just pick up the single-temperature, one-speed device and it’s ready to go. Click once on its main orange button to extrude the plastic automatically, click again to stop, and double click to reverse the plastic — it’s as simple as that. Meanwhile, LEDs will indicate warming up, ready, forward flow and reverse.

The 3Doodler Start dispenses with the conventional pen shape, but has adopted a shorter, thicker and more ergonomically-designed frame that’s suitable for smaller hands. Weighing under a quarter of a pound and measuring 5.4” x 1.4”, the turquoise unit can operate wirelessly for 45 minutes per charge or run while plugged in via a micro-USB port.

“The core values of 3Doodler are creative freedom and limitless imagination, so it was a natural progression to create a pen for a younger audience. The 3Doodler Start provides the perfect educational platform for kids around the world and we cannot wait to see what the next generation creates,” Cowen adds. 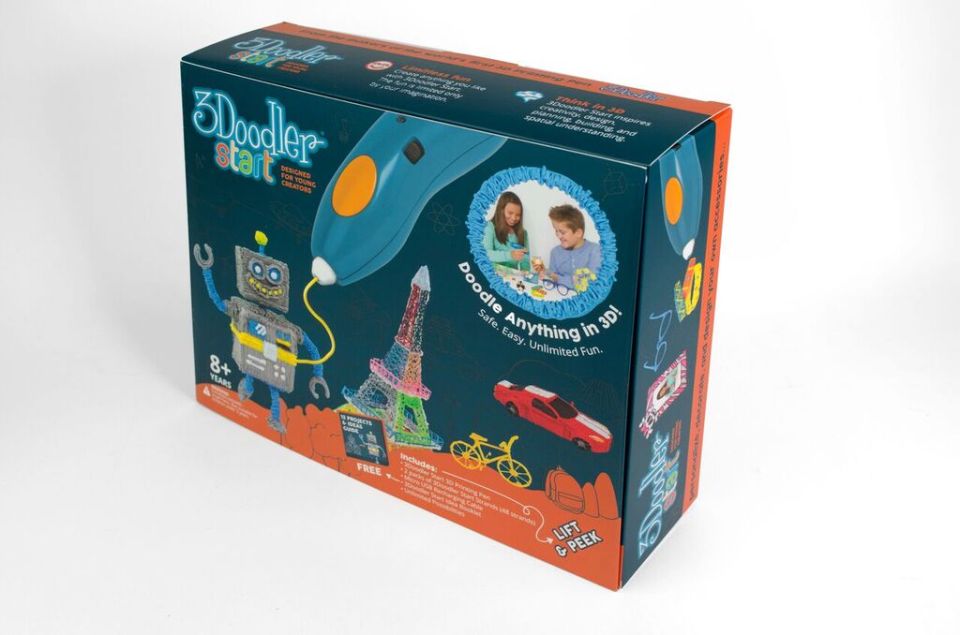 What’s also nice is that those just starting out can follow along with what’s called a DoodleBlock, which is similar to a 3D coloring book and allows users to draw in grooves to form a shape, then pop them out. Once they’ve traced all the pieces, they can then use their 3Doodler Start to join them together to form a finished three-dimensional creation.

Does this sound like the 3D printing instrument for your youngsters or perhaps even you? Head over to WobbleWorks’ page here to get your hands on one today.