The Qduino Mini is the first tiny Arduino-compatible board with a built-in battery charger and fuel gauge.

Adding to 15-year-old Quin Etnyre’s already rather long list of accomplishments was a successfully funded Kickstarter campaign back in March 2015. The Qduino Mini — which has been on display numerous times inside the Atmel Maker Faire booths — is the first tiny Arduino-compatible board equipped with a built-in battery charger and fuel gauge that can notify its user when a LiPo needs a little extra juice. 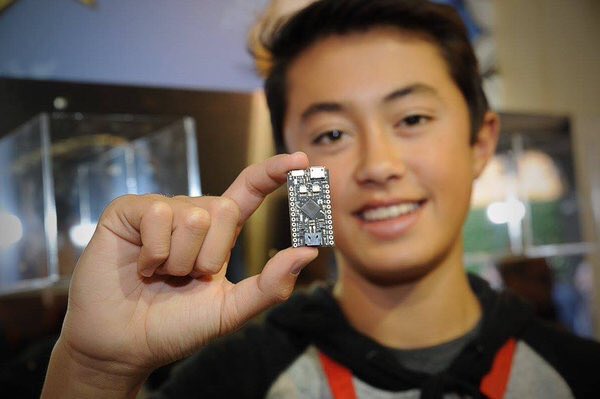 “I always struggled to find a way to charge and monitor a battery, bundle with an Arduino and fit inside of every project.” Inspired by his own frustrations, the young Maker immediately went on to prototype his concept with hopes of one day bringing it to market.

Now available on SparkFun, the Qduino Mini is entirely open source and based on the versatile ATmega32U4 — the very same chip that can be found at the core of the Arduino Leonardo and several other Arduino AtHeart devices. The breadboard-friendly MCU runs at 8MHz at 3.3V and boasts plenty of dedicated digital, analog and PWM pins.

The pint-sized project is not only packed with a battery charger circuit and fuel gauge, but possesses an uber-mini, ultra-thin form factor as well. This makes the shrunken-down, lightweight ‘duino an ideal choice for DIY quadcopter or high-altitude balloon projects, in addition to a wide range of other gadgets like an NFC Smart Lock and B&W Selfie Printer. 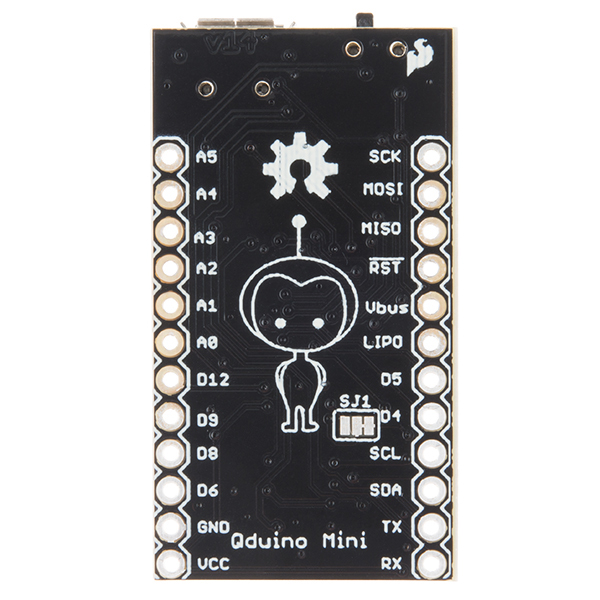 Since its inception, the Qduino Mini has received a few minor upgrades before arriving at its latest iteration. According to Quin, these included two RGB LEDs (one for status, another that’s user programmable), a USB and power switch on the same face, and a LiPo connector on the opposite side of the board. What’s more, it has become even more “mini,” having been reduced from its original 1″ x 1.5” size to 0.8″ x 1.5”.

Sound like the tiny, Arduino-compatible board you’ve been looking for? Well, look no more as the Qduino Mini is available for $29.95 on SparkFun!