This game is FANtastic!

The game Super Hexagon was released on iOS in September of 2012, and later ported to Windows, OS X, Android, BlackBerry and Linux. It was not, however, ported for play on a… fan until 2015. 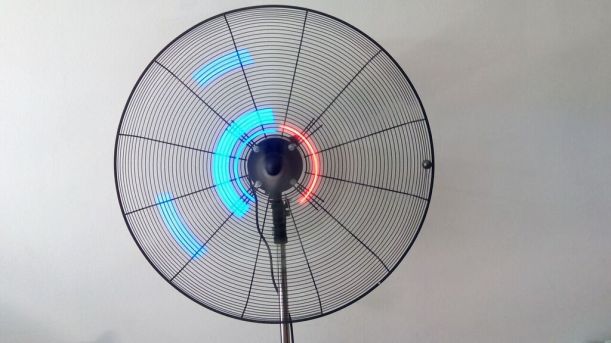 Alejandro J. Cura, with help from friends Jorge Crowe and Cristian Martinez, decided to use an Arduino Nano (ATmega328), literally attached to a fan blade, to display a version of this game in a more “circular” format.

The Nano controls a series of LED lights mounted to a custom printed circuit board, so when they are spun in a circle, they appear to draw bent solid lines around the middle of the fan. This type of display is known as persistence of vision (POV), and tricks the eye into seeing a quickly moving point as a solid line. For the game gaps in these lines are made by carefully timing when the lights go on and off, using a hall effect sensor to measure rotational speed (similar to how a bike speedometer works).

Cura’s device made its successful world premeire in Buenos Aires, Argentina at Casa Abasto, the home of his local hackersapce. If you’d like to build your own, the source code and schematics are posted here. What’s more, the Maker has plans for future improvements on the design itself, as well as plans to expand the documentation. Until then, see it in action below!