This Star Wars fan transformed an old toy from the ‘80s into a remote-controlled AT-AT Walker with Arduino.

What do you get when you combine an Arduino, an Adafruit Servo Shield, an Xbox 360 controller and a 1981 AT-AT Walker? A toy that Star Wars fans like Dave Stein have always dreamed about as kids.

“If you played with this toy growing up you will probably remember how clumsy it was and difficult to move around,” the software engineer by day, tinkerer by night writes.

With hopes of changing this, Stein decided to take his beat-up AT-AT, embed it with an Arduino Uno (ATmega328), and allow it to clumsily walk and perform other functions similar to those seen in the film. 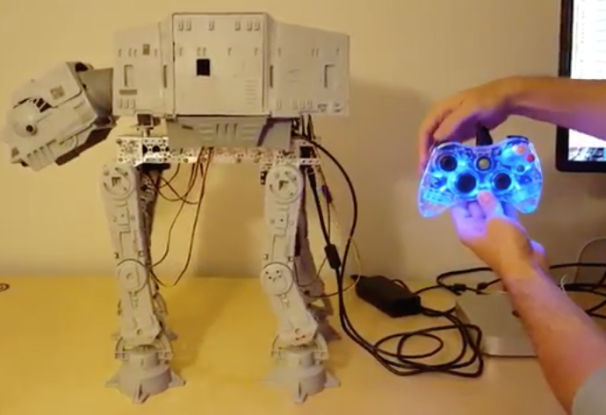 Admittedly, there were some obstacles that the Maker had to first overcome, such as quadrupedal movement, learning how to program an Arduino, and not damaging the Kenner toy’s plastic components.

For control, Stein configured an Xbox 360 gamepad that interfaces with a computer and relays a signal to the Uno. This enables the modded AT-AT Walker to wander left and right, forwards and backwards, and even move its head horizontally.

Did this awaken your Maker forces? If so, you can check out Stein’s entire project here, and see it in action below.