There’s no denying the nostalgic appeal of blowing into a Super Mario Bros cartridge, slipping it into your Nintendo Entertainment System and immersing yourself in an 8-bit world of blocky graphics and chiptunes. The side-scrolling game that we all grew up playing in our family rooms is pretty limited, though. You constantly move forwards, jumping over obstacles and hitting blocks, until you get to the end of a level — that’s about it. There’s no going back, you can’t zoom out and you can only have a maximum of two players. What if there was a way to transform the beloved game into a collective, totally immersive experience? That’s exactly what a group from ETH Zurich and Disney Research set out to accomplish by developing the world’s first cooperative 8-player, 8-bit NES capable of continuous, panoramic side-scrolling.

For this endeavor, the team employed a real NES with real cartridges, giving it a true old-school effect. And it should be pointed out that there was no hacking of the actual console; instead, its creators enhanced the game using DIY hardware and software that multiplexes eight gmepad inputs to automatically handoff control from one pad to the next.

To connect eight controllers to the NES, they used an Arduino (ATmega328)-based multiplexer. Video from the NES is fed through an upscaler to get the output up to a solid 576p at 50Hz, whereas audio output goes directly from the NES to the room’s sound system.

Meanwhile, the NES output video signal is first captured and sent for analysis. A “tracking PC” running custom software processes the video stream, tracks the background and creates a wide, panoramic image. This image is then sent to a media server, which outputs the stream via eight projectors — two for each wall. Ars Technica notes that the tracking PC also has a real-time GPU algorithm to correct any distortion, enabling it to display clear graphics. 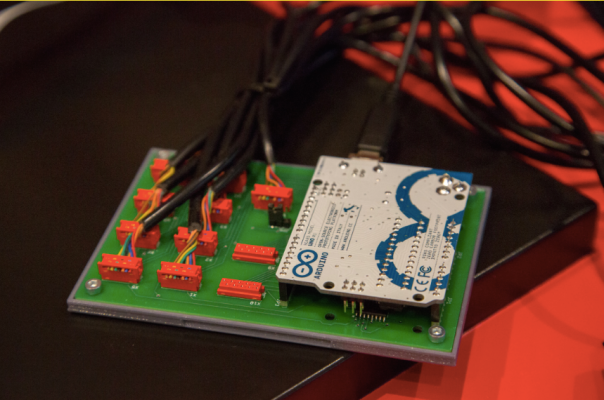 The Arduino multiplexer has two modes of operation: it can either cycle through each gamepad after a fixed amount of time, or the tracking PC can let the Arduino know to change to a specific gamepad, depending on where the players are in a level.

Once complete, the researchers tested the impressive system at a gathering with over 400 guests inside a Swiss night club. As you can imagine, it was a hit! The hope is that it will bring an entirely new level of social interaction to traditional game play. Think about it: Partygoers can swap in and out as they attempt to go from level to level, all while adding a unique ambiance to the environment. (Not for anything else, it can surely make for one heck of a drinking game!) 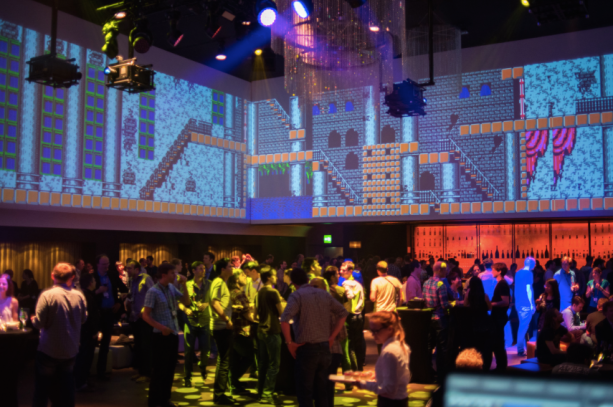 For those who don’t happen to have several projectors or giant walls, not to worry. The platform supports a virtual reality version as well, which reproduces a similar environment using an Oculus Rift headset.

Intrigued? Head over to the researcher’s official page to see how they’re ‘unfolding the 8-bit era.’ You can also head over to Ars Technica’s writeup or simply watch it in action below.