This 3D-printed, Arduino-based generator is capable of producing 30W of power.

Have you been wondering what to do with your 3D printer for the next 250 hours? If so, you can make this hand crank generator from Norwegian designer Even Erichsen. The generator is capable of producing 30W of power, so even though it looks amazing, it wouldn’t be the right choice for an off-the-grid power supply.

According to Erichsen, his original goal for this project “was to generate electricity to boil water for food and disinfection,” but realized that one “would have to work the generator for quite some time to boil even a small amount of water.”

Taking this one step further, if his 3D printer used around 100W on average, this would mean that it would take about 830 hours, or nearly 35 days, of cranking to generate enough electricity to replicate itself. 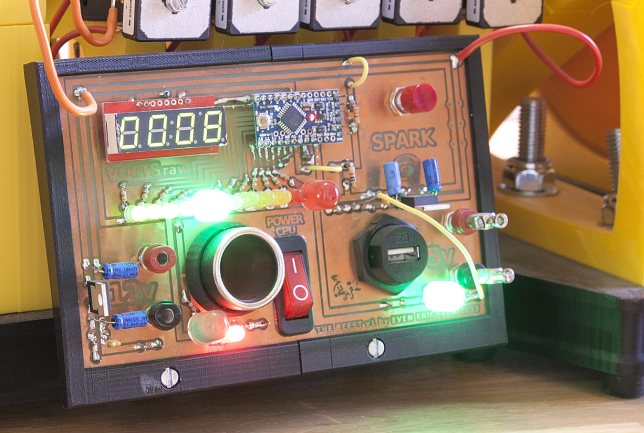 When the crank is turned, as seen in the video below, printed gears multiply the rotational speed, spinning 96 neodymium magnets to generate electricity. An Arduino Nano (ATmega328) measures power output via a nicely made circuit board.

The device itself features 60 3D-printed parts, which called for two 3D printers in order to complete the job: an Ultimaker for the bigger parts, a Makerbot Replicator for the smaller ones. The designer says that, “Until I release a set of instructions, consider this a work of art,” and it really is quite nicely finished. You can find more info on this build on its Thingiverse page, or on JUSTPRESSPRINT with a really cool interactive 3D model.

2 thoughts on “Maker creates his own hand crank generator”