Now, who wants to take a ‘stab’ at turning this off?

While some Makers like to think outside the box, others prefer to mount a servo-driven tentacle to a box. In what may surely be one of the most abstract (and dangerous) DIY gadgets of all-time, YouTuber “OutaSpaceMan” has developed a mechanism that flails a Swiss Army knife around in the air. 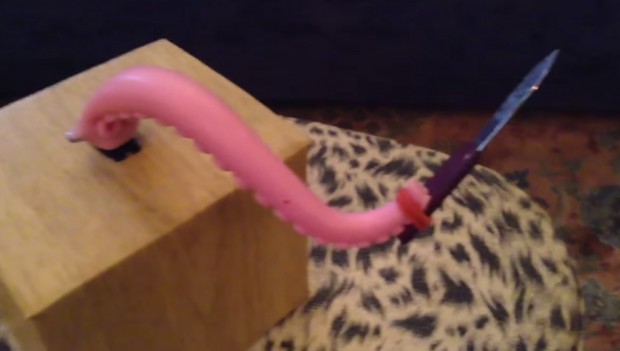 We all know what you’re wondering, why a knife bot? According to his video description, he built the device “to amuse those who may be bored. Just right now I think the world needs a laugh.”

The aptly named littleBits Arduino Knife-Wielding Tentacle consists of an Arduino Mega (ATmega2560), a littleBits Proto Module and a servo motor, which together create a mechanical arm that randomly slashes and stabs through the air. Meanwhile, the project is running the Blink Without Delay Arduino sketch.

Okay, so now the better question: How the heck do you turn this thing off? Kids, don’t try this at home.