Trust us, Adafruit’s new board is un-BLE-vable!

Remember when we brought you a first-ever look at Adafruit’s new lineup of Feather boards back at World Maker Faire? Well, as Ladyada herself promised, the new dev boards are thin, light and ready to let your imagination fly! After having already revealed the first two members of the family — the Feather 32U4 Basic Proto and the Feather 32U4 Adalogger — the team shows no sign of slowing down. Next up: the Feather 32u4 Bluefruit.

The Feather 32U4 Bluefruit is said to be their take on an ‘all-in-one’ Arduino-compatible and Bluetooth Low Energy unit with native USB support and battery charging.

“Bluetooth Low Energy is the hottest new low-power, 2.4GHz spectrum wireless protocol. In particular, its the only wireless protocol that you can use with iOS without needing special certification and it’s supported by all modern smartphones,” Adafruit explains. “This makes it excellent for use in portable projects that will make use of an iOS or Android phone or tablet. It also is supported in Mac OS X and Windows 8+.”

Like its other siblings, the Feather 32u4 is built around the mighty ATmega32U4 clocked at 8 MHz and at 3.3V logic. This chip boasts 32K of Flash and 2K of RAM, along with built-in USB so not only does it already integrate a USB-to-Serial program and debug capabilities, it can also act like a mouse, keyboard and MIDI device.

As Adafruit notes, they’ve gone ahed and added a connector for a 3.7V LiPo and a 100mA battery charger. However, the Feather 32U4 will run just fine via microUSB.

“But, if you do have a battery, you can take it on the go, then plug in the USB to recharge,” the team adds. “The Feather will automatically switch over to USB power when its available. We also tied the battery through a divider to an analog pin, so you can measure and monitor the battery voltage to detect when you need a recharge.”

Measuring only 2.0″ x 0.9″ x 0.28” without headers soldered and weighing 5.7 grams, the Feather can be implemented in a wide range of projects. The extremely lightweight and compact board has plenty of pins (20 GPIO), with eight PWM and 10 analog inputs, four mounting holes, a power/enable pin and a reset button. What’s more, the board makes use of the leftover space for a Bluefruit BTLE module as well as two status indicator LEDs. 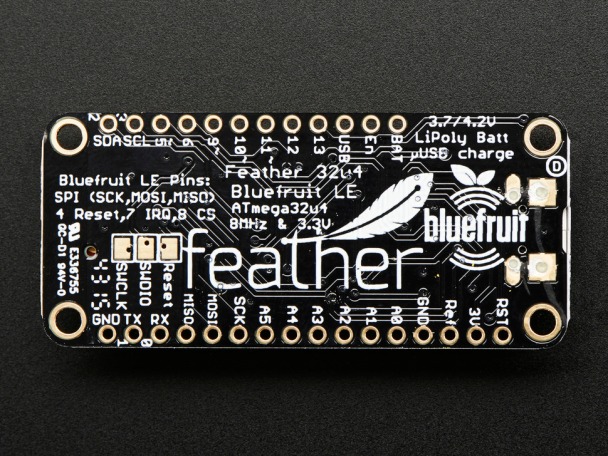 “The board is capable of much more than just sending strings over the air!  Thanks to an easy to learn AT command set, you have full control over how the device behaves, including the ability to define and manipulate your own GATT Services and Characteristics, or change the way that the device advertises itself for other Bluetooth Low Energy devices to see. You can also use the AT commands  to query the die temperature, check the battery voltage, and more, check the connection RSSI or MAC address, and tons more.”

With Adafruit’s Bluefruit mobile app, you can also quickly prototype your next IoT project using your smartphone or tablet as a controller. This data can be read over BLE and piped into the ATmega32U4.

Among the use cases listed by Adafruit include an HID keyboard, a heart rate monitor and a UriBeacon, to name just a few. The chip comes fully assembled and tested with a USB bootloader that enables you to seamlessly program it with the Arduino IDE.

Intrigued? Fly on over to the Adafruit Feather 32U4 Bluefruit page here. Those wishing to unleash the powers of this impressive board will only have to shell out $30. Not too shabby!