Protopiper is a computer-aided, handheld fabrication device that allows you to sketch room-sized objects at actual scale.

Let’s face it, trying to decide whether or not a piece of furniture will actually fit in your living room can be quite the hassle. For those times where a tape measure will just not suffice, one team from the Human Computer Interaction Lab at the Hasso-Plattner-Institut has arrived at an innovative (and perhaps better) solution. Meet ProtoPiper — a modded tape gun that enables users to quickly create full-scale models of any object and determine right then and there whether or not it’ll properly fit inside a home. 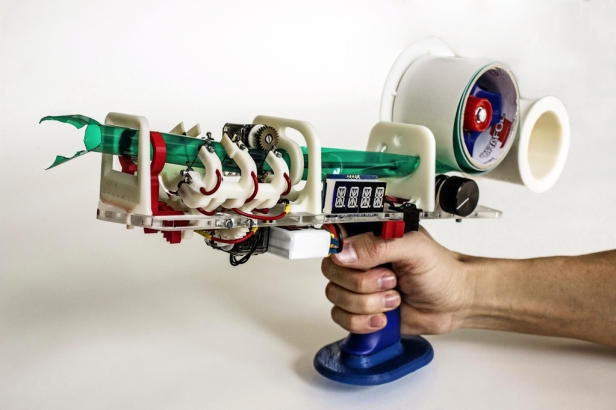 Whereas a 3D printer can produce a prototype of something in hours, ProtoPiper will let you get a sense of what you’re dealing with in a matter of minutes. That’s because it can forgo paying attention to small details. The gadget delivers an open framework similar to the wireframe models on 3D modeling software — only these are capable of taking up a physical space in full scale. Instead of layers of melted plastic, it turns rolls of adhesive tape into strong yet lightweight plastic tubes that act as building blocks for the room-size mockups.

As crazy it may sound, it seems like a pretty darn good idea. The device itself is practically an assembly line all on its own. Tape is drawn from the roll, shaped into a tube and results in a surprisingly somewhat sturdy 3D structure. The good news is that you’ll know immediately if a particular end table will be too snug between the sofa and wall, and visualize how it might look with other furniture. The bad news is that you can’t skimp out on the purchase, as the prototype support your weight!

In terms of electronics, the tape gun is equipped with a four-digit display, an extrude and cut button, an on/off switch, a tool selection dial, servo motors, and an Arduino Nano (ATmega328) to control all of the extrusion, heating and cutting. It’s powered by a single 11.1V LiPo battery.

What’s more, ProtoPiper can be used to devise simple mechanisms that serve a little more function. For instance, the team has even managed to assemble a prototype of a collapsing umbrella, which although may not keep the rain away from anyone’s head, does allow designers to perfect its form and dimensions before paying for a more finished product.

Intrigued? Put aside that tape measure and check out ProtoPiper here.