Maker David Wirth has created the first-ever portable railgun with the help of 3D printing and Arduino.

Most commonly associated with the military or NASA, railguns are electromagnetic projectile launchers based on similar principles to the homopolar motor. Instead of relying on gunpowder to propel ammunition, the futuristic blaster uses an electric circuit comprised of three parts: a power source, two parallel conducting rails and a sliding armature.

Well, David Wirth is neither a soldier or a rocket engineer. Instead, he’s simply a Maker who decided to create a Quake-like railgun with the help of 3D printing and some widely available components. The WXPR-1 houses six large capacitors, which weigh 20 pounds altogether, and an Arduino Uno (ATmega328) to monitor the capacitor voltage, amperage, temperature and battery voltage. The entire thing is powered by a 12V LiPo battery that’s stepped up to 1050V using a micro-inverter and a transformer.

What’s more, the WXPR-1 has pressure regulators in its handle. The system draws CO2 from a paintball gun tank into a compressed gas tank in the middle of the railgun. And while it may look like a Super Soaker, this is surely no toy. Wirth’s monstrous gadget is capable of blasting tungsten, aluminum, carbon and even Teflon/plasma at speeds of up to 559 mph, and firing with 1,800 joules of energy per shot. While such velocity can certainly do some damage, keep in mind that the ones being developed by the military can go upwards of 13,000 mph in a matter of 0.2 seconds. 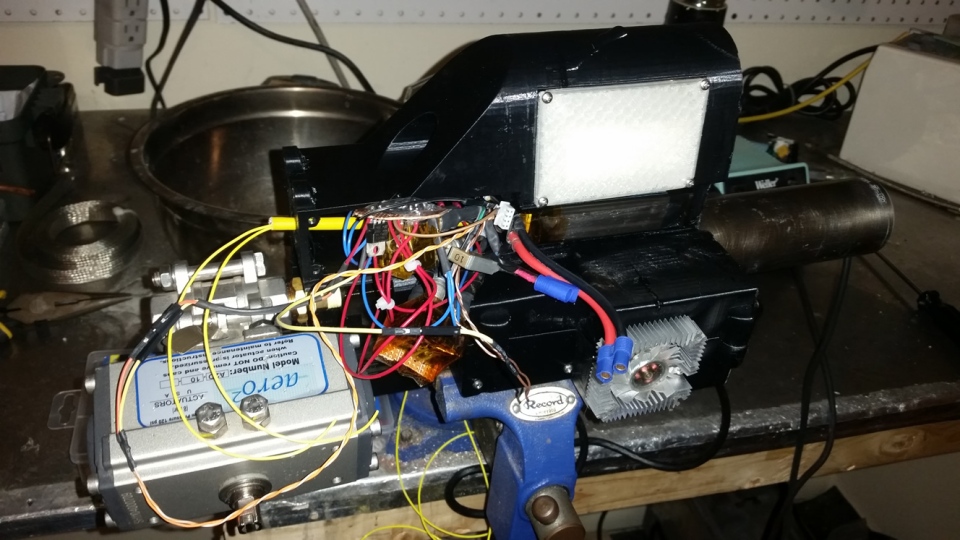 Nevertheless, his demonstrations are pure awesomeness. In the first video, Wirth projects a piece of carbon toward a steel-backed plywood target three feet away, which seems to vaporize in thin air. In his next attempt, the Maker tested an aluminum slug whose impact was clearly visible, leaving a 1/2-inch deep indent.

Intrigued? Watch it in action below, as well as check out Wirth’s entire project here.