Told he could not fly, this San Diego Maker decided to create a Cessna 172 simulator for use with Oculus Rift.

What do you do if you’re a 17-year-old Maker whose aspirations of flying an airplane have been grounded by the FAA due to a pre-existing medical condition? You build your own cockpit similar, that’s what!

Having been interested in aviation for quite some time and still determined to one day earn his Class 3 pilot’s license, Aidan Fay decided to design a full-scale Cessna 172 simulator right in the comfort of his own bedroom. And unlike other computer programs and video games available today, the San Diego-based Maker wanted a system that would take his training to whole new heights. His life-size cockpit includes everything from pedals that control actual airplane rudders and brakes, to a steering yoke, to an Oculus Rift running Lockheed Martin’s Prepar3D software for a truly immersive experience.

Beyond that, he employed an Arduino Mega (ATmega2560), several switches, potentiometers, a few disassembled joysticks, as well as MDF and acrylic for the construction of the actual panel. The innovative teen also used some gears and motors to create a haptic feedback mechanism that can tighten and loosen the steering depending on the simulated flying conditions. In total, the project required more than 200 hours of sweat equity — and it was well worth it! Fay continues his training and looks forward to the day that his dreams are no longer bounded by a medical condition. 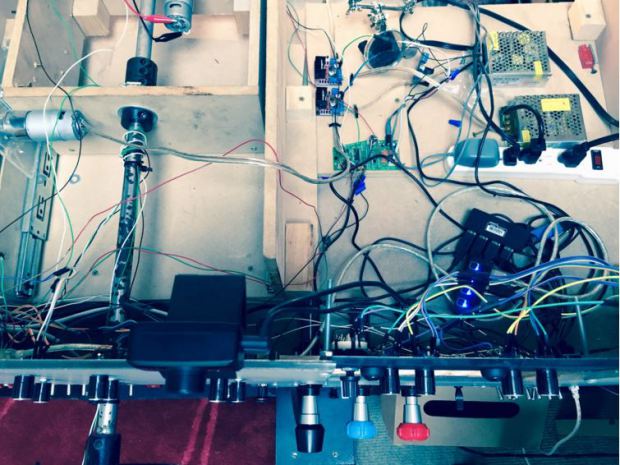 “I love aviation, especially World War II aircraft, and I love to build things. This project was my way of combining two of the three things I love most,” Fay explains.

Intrigued? Fly over to the Maker’s project page, and be sure to read MAKE: Magazine’s recent writeup on the simulator here.