As the desire for the world to become more connected increases by the day, we see more and more devices connecting to each other and sensors being built into everything around us. The advent of the Internet of Things means that MCUs need to be smaller and more energy efficient than ever before, but at the same time these processors need to be smarter and cheaper, and from a developers perspective, need to be easy to program as well.

Fortunately, the Atmel | SMART ARM-based family has been optimized for cost and power sensitive use cases, targeting applications such as the IoT, smart metering, industrial controls and domestic appliances, to name just a few. Moreover, the recently launched Atmel Studio 7 has introduced a new capability to measure energy consumption during development — a clear indication of the growing significance of this factor to developers in their embedded designs.

Easily measuring energy consumption during development is clearly important, but once you know your consumption what steps can you take if you need to reduce usage in your design? The MCU itself certainly contributes, and typically a smaller device will need lower power. As a result, many designers’ first strategy is keep the energy consumption low in their design is to reduce code size, thus allowing them to devise on a smaller MCU. This often requires a fair amount of manual code optimization, a time consuming and costly task.

What if there was a way for you to not only take advantage of the innovative Atmel | SMART MCU lineup and the added features of Atmel Studio 7, but also take your embedded software designs to the next level, further reducing your energy consumption, shrinking your code size without manual intervention and at the same time improving performance? Now there is, thanks to the SOMNIUM DRT Atmel Studio Extension.

Unlike traditional tools which only consider the ARM Cortex processor, DRT is aware of the coupling of the processor and its memory system, automatically applying a new series of device-specific optimizations. DRT analyzes the whole program, identifying all instruction and data sequences and the interactions between them. Knowledge of the Atmel SMART MCU’s memory system and ARM Cortex pipeline are used to intelligently resequence your program. 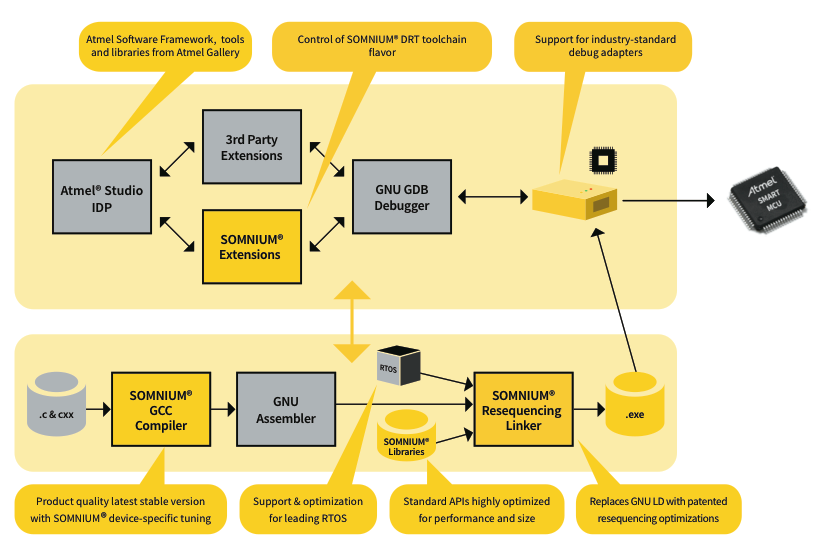 “By adding the SOMNIUM DRT to Atmel’s software and tools ecosystem, our developers can take their projects to market with improved code generation,” explained Henrik Flodell, Atmel Senior Product Marketing Manager, Development Tools. “With access to high-quality tools, developers can optimize memory-constrained systems for performance along with power efficiency. SOMNIUM’s advanced technology brings additional value to our customers in these areas.”

Interested? A 21-day trial of the SOMNIUM DRT Atmel Studio Extension can be be downloaded free of charge from the Atmel Gallery. An annual license with full commercial support is also available from SOMNIUM for $750.