Makerarm is a complete personal fabrication system crammed into a single, beautifully-designed robotic arm for your desktop.

While a handful of robotic arms have emerged onto the scene recently, we’ve been holding out for one that was brought to our attention back in May. And the time has finally arrived! Now live on Kickstarter, the aptly named Makerarm is a complete personal fabrication system packed into a sleek robotic arm that sits right on your desktop.

The affordable gadget, which has an impressive work area of 378.5 square inches, is equipped with interchangeable heads for various applications. These include 3D printing both filament and resin, plotting on any surface, CNC milling at high speeds, engraving with a 500mW laser and soldering PCBs, among countless others. What’s more, Makerarm boasts a reach of 15.7 inches and is capable of assembling electronics by picking parts up and placing them down using either vacuum pump coupled suction cups, electromagnets or grippers.

Makerarm is being billed with many of the components you would expect from today’s most popular 3D printers, namely a 10″ Z-axis and the ability to extrude an assortment of materials. The modular tool also comes with features like auto-leveling to ensure consistency and Wi-Fi connectivity for wireless control. Plus, it can work in coordination with other Makerarms to accomplish specific tasks. 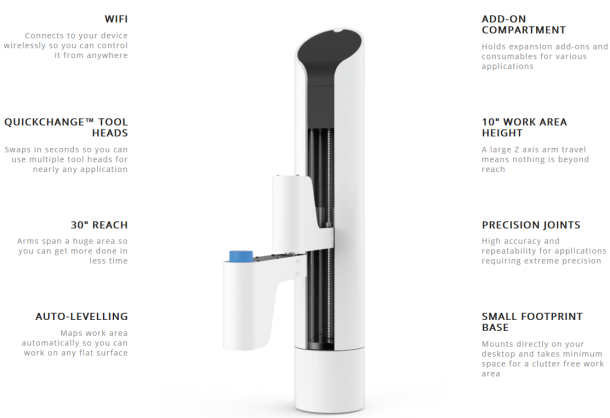 The impressive SCARA robot is built around an ATmega2560 responsible for handling the I/Os and motion control, as well as another MPU that serves as its brain. Makerarm comes with its own browser-based software, which allows remote management from any device via Wi-Fi. This means you’ll be able to do things like view Makerarm in 3D, train it to perform repeated actions, load designs and models for one-click 3D printing, milling and engraving, connect third party apps, and even create custom apps of your own through its hardware development kit and API.

On top of all that, Makerarm’s UI can detect which head is attached and will only display options and information relevant to that particular function. And, should you wish to use your favorite CAD/CAM and tool path generation program such as Autodesk Fusion 360, you can go right ahead!

Is this the piece of machinery you’ve been dying to have on your workbench or desktop? Then head over to Makerarm’s Kickstarter campaign, where the team is currently seeking $349,750. Units are expected to begin shipping a year from now.