TailTalk is a smart device that helps you understand your dog’s complex tail language.

Dogs, by nature, are very expressive animals. Like humans, they communicate when they’re feeling happy, sad, nervous, angry, and of course, hungry. Instead of spoken words, our beloved four-legged friends use their tails to convey much of this information — a nonverbal language that can be quite complex and difficult to recognize for most pet owners. But what if there was a smart wearable that could collate this information and translate it in such a way that makes it much easier to understand? In comes TailTalk.

The brainchild of Yannis Tsampalis and Mike Karp, TailTalk is a tiny, sensor-laden device that comfortably goes around your pup’s tail to capture movement with its embedded accelerometer and gyroscope, and then employs a proprietary algorithm to convert the wagging into the emotion that he or she is expressing.

The lightweight, unobtrusive gadget connects to its accompanying DogStar app over Bluetooth, providing you with a simple, user-friendly dashboard that lets you into the mind of good ol’ Fido even when you’re not around. This consists of your dog’s profile, along with their happiness score, upcoming events and favorite canine pals. 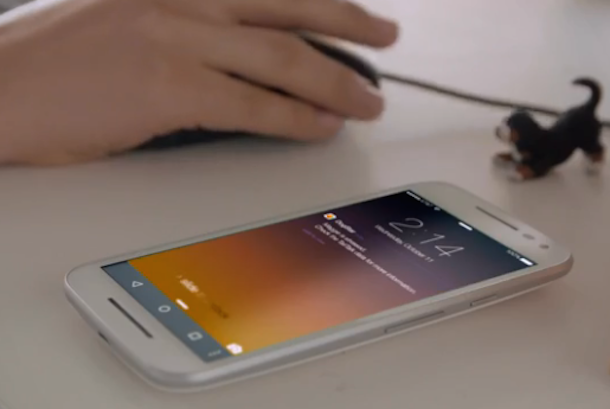 Using the app, you can log and graph their activity, manage their schedules, set reminders for yourself, and even add notes related to a particular event. More importantly, the “emotion sensor” will notify an owner’s smartphone when the dog’s tail moves right, which means they’re happy or energetic, or left, denoting anxious or aggressive feelings. TailTalk boasts a six-month battery life and has been designed to withstand the wear and tear (and chewing) that’s expected with everyday use.

Throughout their journey from the MakerSpace to MarketPlace, the DogStar Life crew has developed their prototype using the highly popular Arduino platform and has already been the recipient of some pawesome awards. Looking ahead, the New York-based startup is hoping to storm past its $100,000 pledge goal on Indiegogo.

Ready for a next-gen, Look Who’s Talking Now-like device that’s take the guesswork out of your daily interaction with Rover? Head over to TailTalk’s crowdfunding page. Delivery is slated for May 2016.