Canbot is an Ollie-like robot that can autonomously drive itself.

Maxmillian Kern has created an adorable, 3D-printed robot that rolls its way across hard surfaces. The Sphero Ollie-like device, aptly named Canbot, is based on an ATtiny85 MCU and comprised of only four 3D-printed parts for the body and wheels, all connected by screws. The “heavier” components, including the servos and 3.7V battery, are embedded in the lower half to to help it remain balanced. 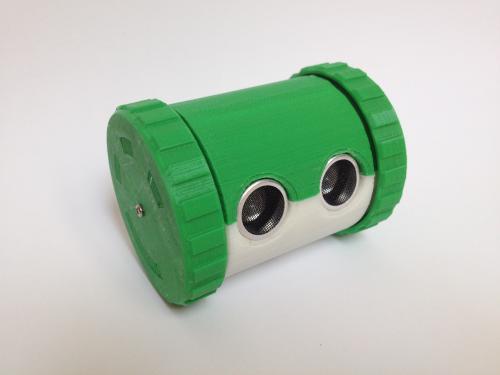 Not only can it autonomously drive itself around via its ultrasonic sensor, the Maker can also use a modified TV remote for control. Commands are received from the infrared signal of the old clicker. As for power, he originally considered adding some kind of plug to program and charge the robot, but settled for a switch due to space constraints.

“There still is a problem with the weight distribution. I put a piece of lead in the front but that didn’t make it much better,” Kern writes. “It needs some kind of stabilization. But that’s difficult with an ATtiny that only has 5 [technically 6] I/O pins. You would have to sacrifice the ultrasonic sensor with a gyro board. There are lots of possible improvements. The first thing would be nice geared motors instead of servos.”

Interested in building your own? You can find all of Canbot’s files on Thingiverse here.