Devpost ranked the APIs, languages and technologies that student hackers used during the 2014-2015 academic year.

Thanks to the burgeoning Maker Movement, the number of hackathons has surely risen in recent years. The next generation of programmers, engineers and designers all come together for a few sleepless days, fueled by pizza, Red Bull and coffee, to devise new and exciting gadgetry either of their choosing or based on parts provided by one of the sponsors. These weekend-long events organized by and for students are surging in size, scale and frequency, popping up in some of today’s booming tech centers ranging from Silicon Valley to New York. At hackathons, time is a valuable thing. This, of course, means that participants must strive to generate code and piece hardware together as quickly as possible.

Which programming languages are the most popular? What has become the go-to hardware? Which APIs and platforms do people utilize most frequently? This is what Devpost —  formerly known as ChallengePost — sought to find out. In order to accomplish this, the online community and competition platform collected data and ranked the technologies and programming languages that student hackers have turned to the most throughout the 2014-2015 academic year.

Devpost examined project tags from a sample of over 13,000 student hackers who participated in 160 hackathons and submitted 9,898 projects, either in hackathons or on their Devpost portfolios. The technologies tagged in projects include languages, various APIs, frameworks, databases, IDEs, libraries and hardware, among several others. For each category, the company reported the top five tags.

While you can check out the entire report here, we’ve highlighted some of the more interesting findings below.

When it came to mobile platform, the crowd favorite was Android with 38.2% followed by iOS at 22.7% and Windows Phone at a distant 4.9%. As for programming languages and frameworks, HTML and CSS topped the list with JavaScript, Python, Java and C/C++ not far behind. Outside of the top five included PHP, Objective-C, C#, Swift, JSON, Ruby, XML, Ajax, Shell and Processing. 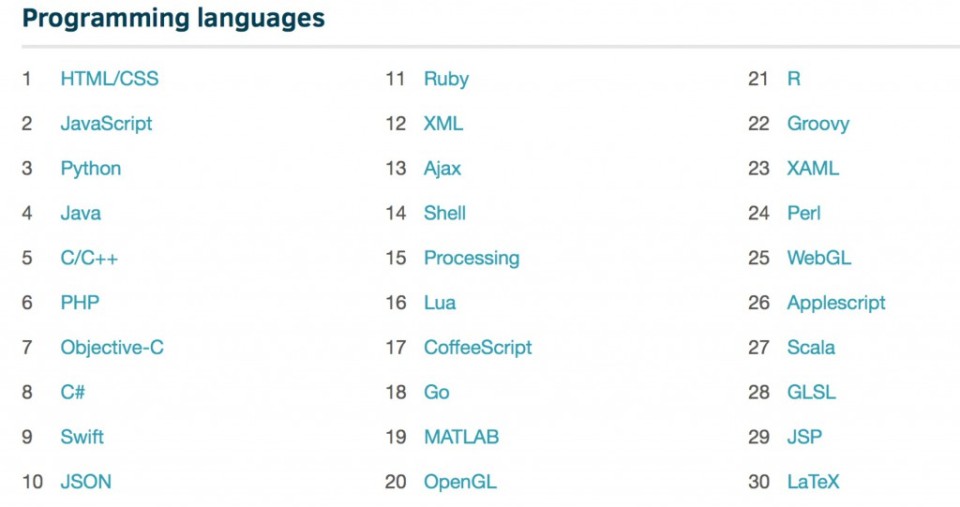 In terms of hardware, the easy-to-use Arduino unsurprisingly found itself atop the leaderboard ahead of Myo, Pebble, Leap Motion and Oculus Rift. Other notables included Raspberry PI (#6), Intel Edison (#7), Particle (#9) and Tessel (#18).

The use of standard libraries and preexisting tools is paramount in getting a project up and running quickly. And so, many developers rely upon popular APIs and SDKs. According to DevPost, the most popular programs used by students included Twilio for messaging, Facebook for social, Venmo for payments, Google Maps for geo, Spotify for music and Unity for gaming. The rankings reveal that Node.js was extremely popular during the academic year, more so than app frameworks like Flask, AngularJS, Ruby on Rails and Django. 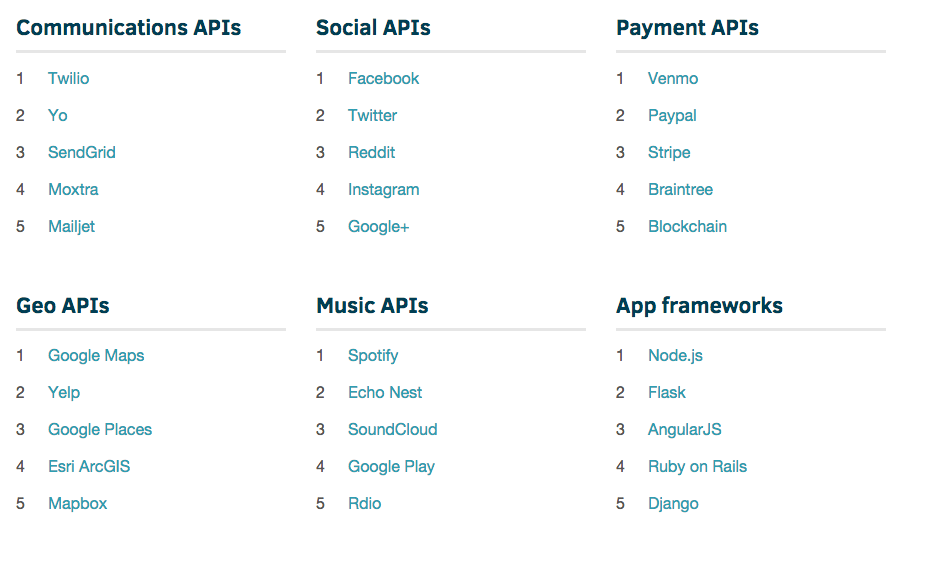 Interested in more? You can explore Devpost’s complete findings here.