Relive your old-school arcade memories with this claw crane-inspired project.

Jeez, just think of how much of your parent’s money you spent as a kid in those candy or stuffed toy-grabbing machines? You know, the ones where you put a quarter in and maneuvered a joystick in hopes of snatching a piece of junk that cost less than the amount of coins you inserted. Ah, the memories.

Well, what if you were able to reminisce about those good ol’ days by creating a gadget of your own? That’s exactly what Mahmoud Tolba of Egyptian startup Integreight has done. The engineer was looking to do something enjoyable and a little out of the ordinary for Maker Faire Cairo using 1Sheeld — an ATmega162 powered Arduino shield that connects to an Android mobile app enabling its users to take advantage of various smartphone features like its display, gyroscope, accelerometer, magnetometer, GSM, Wi-Fi and GPS. In this case, Tolba employed the 1Sheeld to steer a mechanical claw with his handheld device.

While we recall seeing this project earlier this summer and chatting with the Integreight team in our booth back at Maker Faire Bay Area, it took a recent Popular Science to trigger our memory. And boy, are we’re glad it did!

Back in the day, the crane machines consisted of a printed circuit board, a power supply, a currency detector, a credit/timer display, a wiring harness, a bridge assembly, a joystick and a claw, of course. Meanwhile, the cabinet was usually constructed of MDF (though some were made of aluminum alloy) and an acrylic window. 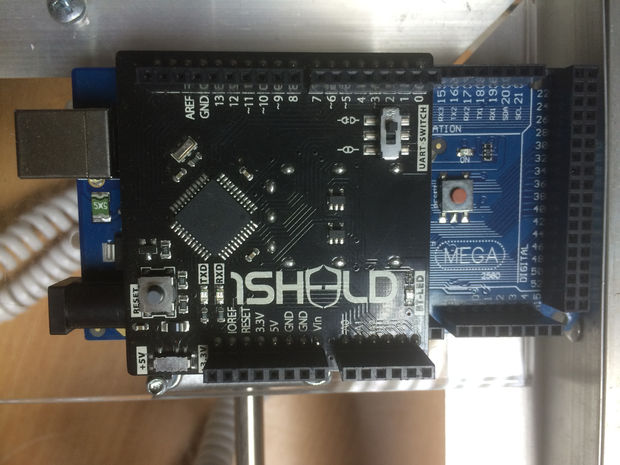 Inspired by the retro design, Tolba crafted his innovative candy grabber with SolidWorks, and built the machine’s body out of aluminum bars, plywood and transparent acrylic sheets. An Arduino Mega (ATmega2560) is tasked with controlling the claw, which is made of acrylic pieces held together by screws. To operate, players can input commands to the Arduino through the 1Sheeld Gamepad Shield’s smartphone interface.

“I used Gamepad Shield which is a GUI on my smartphone which has some buttons like PlayStation joystick and connected to Arduino through Bluetooth and I used it control the motors of my machine to catch a candy then put it in the box at the bottom left corner,” Tolba explains.

The accompanying mobile application connects to the shield via Bluetooth, so when any button from the gamepad is pressed, it sends the data over to the 1Sheeld, while the Arduino controls the DC motors through a relay board. On top of that, a seven-segment display counts down from 60 seconds. And just like the original units that were a fixture at nearly every arcade, diner and bowling alley, when the counter hits zero, a sound bit will emit from the smartphone indicated that the game is over.

The project was a hit during Maker Faire Ciaro and since then has generated quite a bit of attention on Instructables. This isn’t his first treat-based project either; in fact, he has devised a clever DIY vending machine as well. You can check out both creations here.