When it comes to the Maker Movement, DIYers never cease to amaze us with new ways to recycle electronic waste. Take Instructables user Hesam Hamidi for instance, who has impressively created a Delta-style 3D printer using parts from an old dot matrix printer and flatbed scanner. 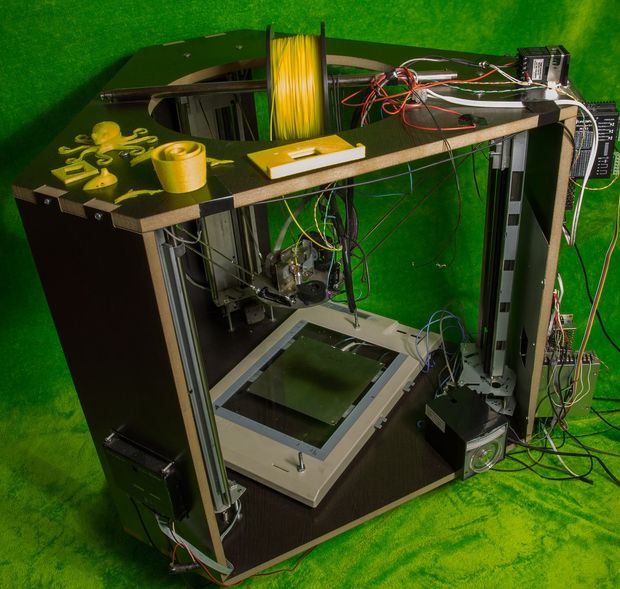 Whereas FDM printers typically posses an aluminum or precision shaft frame, the Maker had swapped it out for five pieces of 16mm MDF, fixed together by wood screws. Three adjustable cabinet legs were attached under the body to keep it level, while another beam was added to the top of the body to support the filament spool. Attached to the trio of vertical MDF frame pieces are rail and carriage assemblies taken from the dot matrix printer, which fortunately already had their stepper motors and belts installed.

“Each slider has a step motor that moves carriage by a timing belt for about 430mm. At the end of sliding course, there is a home position sensor that senses the tractor motion end. Each step moves the carriage for 106 microns and in case of using micro stepping drivers we can reduce this length. Dimensional specifications of our 3D printer were specified based on slider motion,” Hamidi writes.

The end effector is also a unique attribute of Delta-style printers. In this project, it was made from a steel plate and provides a mount of the extruder, which is driven by another scavenged stepper motor along with a timing belt pulley and pulley tightening mechanism.

“A U-shaped profile was used to support stepper motor, ball bearings and hotend. Support plate is a CNC cut circular steel plate that has six holes for ball end supports with 120 degrees to each other. Hotend was purchased from a Felix printer with nozzle diameter of 0.3 mm,” the Maker adds.

For the print bed, Hamidi repurposed an Epson flatbed scanner, which was selected due to its durability and smoothness. The inner workings of the device were removed and replaced with a 220V 300W flat heating element beneath the glass. Meanwhile, the bed heater has a 12V element and NTC thermistor to regulate temperature, and is controlled separately by way of a household thermostat.

In terms of its electronics, the 3D printer is based on an Arduino Leonardo (ATmega32U4) and four different stepper drivers that take the place of the common Arduino Mega/RAMPS 1.4 combination. Beyond that, three analog inputs were employed to sense signals of home position sensors, while eight digital outputs send pulses to four stepper motors. Temperature of the hotend and heater are managed separately by individual controllers.

What’s more, the DIY machine boasts a size of 600mm x 650mm with a build volume of 200mm x 200mm x 200mm and can achieve printing speeds of up to 80mm/second in all three directions. Interested in constructing one of your own? Head over to the project’s Instructables page, where you’ll find a detailed breakdown of the build including its schematics and code. In the meantime, watch it in action below!