Stretchable batteries inspired by origami could one day power smartwatches and other wearable devices, researchers say.

Researchers at Arizona State University have created a battery that can stretch up to 150% of its original size, opening the door to a wide range of potential applications in wearable technology. Based on the origami variant kirigami, the team was able transform a larger battery into several smaller ones through a series of folds and cuts. As smart fabrics, watches and other devices continue to emerge, companies will surely be eager to embrace such an easily integrated, flexible power supply opposed to its much more rigid siblings. 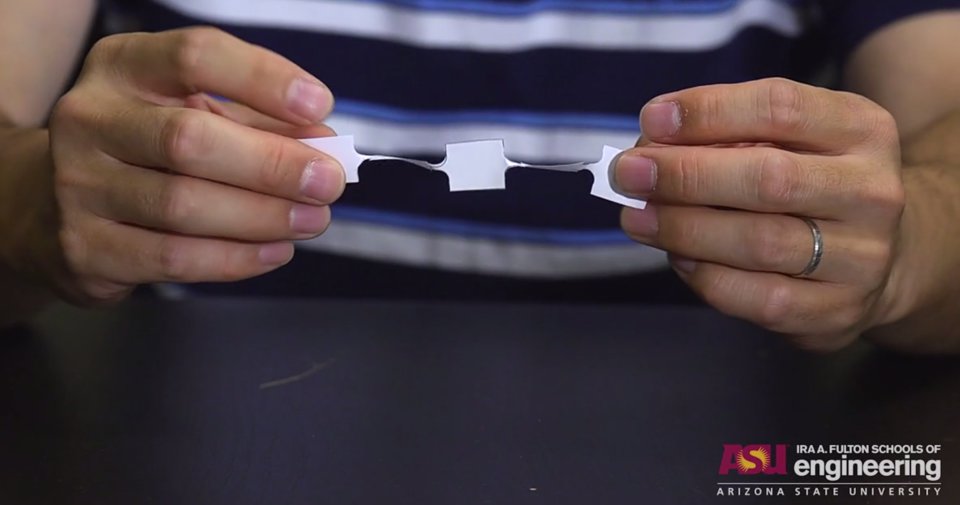 Led by associate professor Hanqing Jiang, the battery was developed using slurries of graphite and lithium cobalt dioxide, then coating them onto sheets of aluminum foil to make positive and negative electrodes. From there, they added bends and cuts to establish the patterns. The result? A battery that could stretch while still maintaining full functionality.

Despite engineers having used origami as inspiration for foldable batteries that can flex in the past, the team says this marks the first time a lithium-ion battery has been made stretchable.

“Energy-storage device architecture based on origami patterns has so far been able to yield batteries that can change only from simple folded to unfolded positions. They can flex, but not actually stretch,” the researchers explain.

In order to test its efficiency, the kirigami-driven prototype battery was sewn into an elastic wristband attached to a Samsung Gear 2 smartwatch. Even as the strap was stretched in various ways, the battery was able to continue powering the watch and its functions, including playing video.

You’ll want to see it in action below!

1 thought on “These kirigami-based, stretchable batteries may power future wearables”