This EEG-powered dress shines red when alert and green when relaxed.

Rain Ashford has been tinkering around with EEG-enabled wearable devices for quite some time now. In fact, she is in the midst of wrapping up her doctoral thesis. As part the process, the Maker has created a rather slick, interactive dress as a fun way to display engagement and moods in crowded situations, particularly those so noisy that hearing someone speak is virtually impossible. 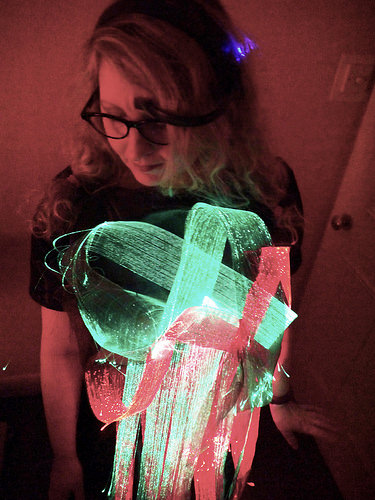 The aptly named ThinkerBelle EEG Amplifying Dress uses a NeuroSky Mindwave Mobile EEG headset to collect brain information and relay that data to her garment to non-verbally communicate with those nearby. Ultimately, this leaves it up to observers to make their own interpretations from the brilliant spectacle.

“I created this dress in response to a subsection of feedback data from my field trials and focus groups, which investigated the functionality, aesthetics and user experience of wearables and in particular wearer and observer feedback on experiences with my EEG Visualising Pendant,” Ashford writes.

The dress was constructed out of satin fabric and fiber optic filament woven into an organza. The EEG headset collects and amplifies data in the form of two separate streams — attention and meditation — which are sent over via Bluetooth and visualized on the top layer of the dress through a series of LEDs. The illumination is controlled by an Adafruit Pro Trinket (ATmega328): red light signifies attention while green denotes a state of relaxation.

“The dress is constructed so the two streams of data light overlap and interweave. The fiber optic filament is repositionable allowing the wearer to make their own lighting arrangements and dress design,” she adds.

What’s more, the wearable project features a variety of modes, one in which lets the user record and playback the data. This means someone can design a combination of color and lights on the dress, then replay it after taking off the EEG headpiece. This enables the wearer to come across as though he or she is concentrating or relaxed to those around.

“Why would someone want to do that? Think of this much like a lie detector test. Sometimes you want people to know how you feel, and other times you would rather keep your thoughts to yourself. So, in this case if you want to appear calm even though you are really agitated, you can just have the dress display a previous calm time period,” the Adafruit crew explains.

Pretty cool, right? Check the project out in its entirety on Ashford’s page here. Not for nothing, the blend of these two colors makes for one heck of Christmas attire!